Sporting News magazine is always good for some unconditional Bronco love, and their 2010 college preview magazine is no different. Take a picture, Sporting News. It will last longer.

After the jump, follow along as I touch on some highlights of the 2010 magazine, have a good chuckle about Colin Kaepernick's Nevada career, and look ahead to what the Broncos face this season. 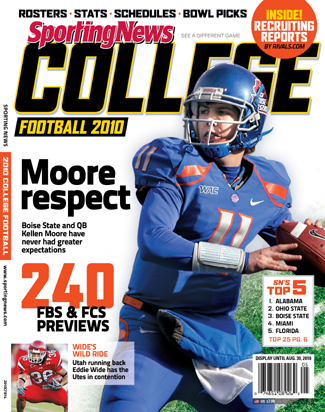 Needs to consult with Idaho Press-Tribune on headline puns. (via www.streetandsmiths.com)

How much does Sporting News love the Broncos? A little less than you do, but a whole lot more than Phil Steele does.

The Sporting News preview magazine picked Boise State as the No. 3 team in the country, the first non-BCS to make the Rose Bowl, the WAC's overqualified champion, and the most hyped non-BCS team since David Carr's Fresno punked the Sports Illustrated cover guy. But you knew that already because you read BroncoSports.com press releases.

"We've got to let our own expectations drive us and push us and hopefully make us the best we can possibly be," Chris Petersen says.

That is one of a couple of life-mantra Coach Pete-isms that the Sporting News writing team scribbled down in between tears of epiphany. The angle of the Boise State preview took a decided turn toward expectations - how no team has ever been in BSU's shoes, how the Broncos plan on dealing with the crushing weight of pre-printed national championship swag, how little Mark May cares. Of course, there was actual football talk, too.

The "rebuilt" offensive line took a turn in the spotlight. The Sporting News got its facts straight with the musical chairs line rotation of spring (it's Myers, Potter, Byrd, Lawrence, and Wright, unless it isn't), and the magazine singled out Brenel Myers as the next big thing, both literally and figuratively I assume.

Sure beats a Gene Wojciechowski story.

Sporting News went ahead and added a two-deep depth chart onto its Boise State preview, apparently forgetting the fact that I WILL RIP ANY PRESEASON DEPTH CHART TO SHREDS WITH MY OCD DEPTH CHART ABILITIES. Some kids want their superhero power to be flying. I want mine to be knowing preternaturally who will back up Austin Pettis.

Please do not read too much into any of this:

Of course. there is more to the Sporting News magazine than just a Boise State preview (which is still worth the price of admission because I in no way covered all that they say about BSU). There is the obligatory WAC preview, which must fall between reprinting the 2009 schedule and previewing NAIA teams on the pecking order of intern job responsibilities.

To no one's surprise, Nevada is listed as the conference's No. 2. Sporting News recognizes the Wolf Pack's lack of defense, notes that no one is too hot on Chris Ault anymore, and honors UNR with the white elephant gift of a Human Bowl appearance. But you want to know my favorite part? Sporting News has this Colin Kaepernick guy figured out.

Kaepernick, for all of his accolades, has gone winless in three bowls, four regular-season games against BCS teams, and three games against the eventual WAC champions. He increased his efficiency rating by seven points in 2009 but still ranked fourth in the WAC and completed just 58.9 percent of his passes.

You will be happy to know that this paragraph is now part of Kaepernick's official Wikipedia entry. (Note: Once I figure out how to do that.)

Third on SN's WAC rundown is Louisiana Tech for reasons that are not immediately clear to me. They have a new coach? They are installing a completely new offense? They are letting a former tight end challenge for the starting quarterback job this fall? Sonny Dykes and Tony Franklin must be some sort of football Volturi.

Fresno State is picked to finish fifth and play in something called the Kraft Fight Hunger Bowl. Hawaii is expected to be worse than New Mexico State. San Jose State is terrible.

And then there's Idaho. Tell me something embarrassing, Sporting News.

Descending: Idaho. The Vandals were a major surprise with a bowl win in 2009. However, they allowed 43 more points than they scored and must rebuild a once-powerful offensive line.

Boise State may not fall, but they'll stumble in the WAC - likely in unexpected places such as Las Cruces or San Jose.

/checking atlas to see who plays in Las Cruces and San Jose.

Yeah, that's not going to happen.

Get your copy of the Sporting News on newsstands now

There is more good information than I have the time or capacity to share. Go down to your local Barnes and Noble, pick up the Sporting News college preview magazine, and take a half day. You'll be glad you did.

What do you think about Sporting News' take on the Broncos? Think that expectations is a fair theme for the 2010 team? Can you fathom any circumstance that will make the Broncos stumble in Las Cruces or San Jose? Share your thoughts in the comments.