The latest entry in EA Sports' college football video game franchise will hit store shelves on July 13. What better way to get a feel for the 2010 Boise State football roster than to peer into the looking glass through the eyes of Boise State's video game team.

Did Kellen Moore score a 99 rating? Is Titus Young really better than Austin Pettis? And what have they done with Brenel Myers? Find out the answers to these questions and more, after the jump. Plus, a Kevin Sapien sighting. 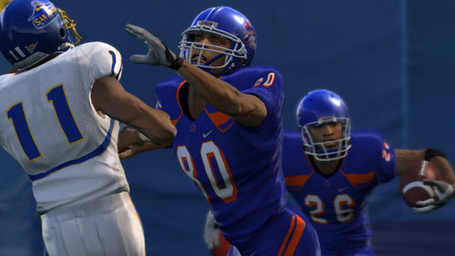 Kyle Efaw should really cut back on Jamaica Me Tan. (via cache.gawker.com)

EA Sports brought back its lauded TeamBuilder feature from a year ago so that we all can waste a good hour-and-a-half trying to recreate the 2001 Boise State football team. Also, the TeamBuilder feature lets you upload any current roster and get a sneak peek at player ratings for each school. Sneak away, Bronco fans.

Note: Players and positions are per EA Sports and not, you know, the real world. I am fully aware that Dustin Kamper does not play cornerback. Also, these ratings may change, pending my scathing letter to EA's ratings algorithm.

Boise State life force Kellen Moore scored a 96 overall rating, which easily tops his 90 from last year and hints at a possible 99 in next year's version. He is the new Tecmo Bowl Joe Montana, this much is true.

Among the top quarterbacks in the country, none come close to matching Moore's 96 rating. So stick that in your pipe and smoke it, Sporting News!

On a sadly related note, Colin Kaepernick is only a 91. Looks like he and Graham Watson will have much to discuss at their weekly fro-yo date.

And now the moment that Titus Young has been waiting for: Titus Young's speed score

The retired Boise State lineman called it a career this offseason due to a bad everything, but EA Sports said "injuries schminjuries" and threw him in the game anyway.

Instead of a bad neck, it appears EA Sports gave Sapien brain swelling and eyebrow balding.

Boise State OL Brenel Myers was not included on the EA Sports roster despite the fact that he is a starter, a Fiesta Bowl hero, and a whole lot better than Jake Broyles. Fortunately, Myers owns a Gamecube so NCAA Football releases stopped mattering to him in 2006.

Poor Joe Southwick, or should I say Haley Joel Osment?

By far, the Boise State player with the harshest review from EA Sports was Joe Southwick. Think the competition between Southwick and Michael Coughlin for Boise State's No. 2 QB is close? EA Sports doesn't. Coughlin got a 72 rating. Joe Southwick looks like a 14-year-old. 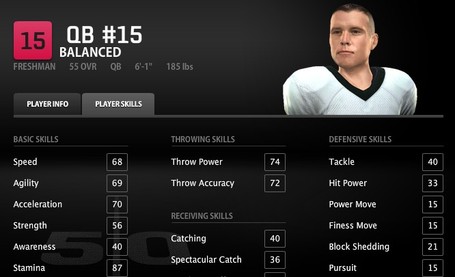 Southwick's overall rating is a 55, which most high school quarterbacks could achieve. His awareness rating is a 40, which is typically reserved for children who live in bubbles. His throw power is 74 and his throw accuracy is 72, but those numbers mean significantly less when you consider the prepubescent girl's body that EA Sports has stuck him in.

Compared to Joe Southwick, Brad Elkin is an Adonis.

Head over to EA Sports' TeamBuilder page to build your own Bronco team and get a look at the full ratings for each Bronco player. I would have you visit the team I created, but saving online content is not something I am particularly good at apparently.