Boise State favored against Virginia Tech according to early odds

Share All sharing options for: Boise State favored against Virginia Tech according to early odds

Betting is an evil vice that will destroy your family and send you to the poor house, but here goes anyway.

The first sports book odds are out, and Boise State is a 2.5-point favorite against Virginia Tech in their Labor Day showdown in Washington D.C. How big of favorites are the Broncos against the Beavers? What is the line like for Boise State's big WAC showdowns? After the jump, get a complete look at the early odds for Boise State and all of college football's best games of 2010, and discuss which ones you think are too high, too low, or just right. 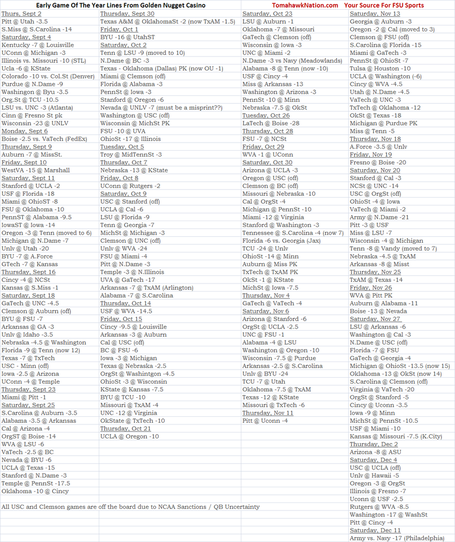 Boise State will be favored in all of its games, will look elsewhere for shoulder chips

The Bronco-Hokie game was the most likely game on the Broncos' schedule that would feature BSU as an underdog. Well, never mind about that. With Oregon State coming to Bronco Stadium and the WAC being the WAC, the Broncos will likely be favored in every single game they play this year right up to the national championship game. Oh wait. Am I getting ahead of myself?

The NFL oddsmakers have a policy that I assume extends down into college football (someone with a gambling addiction please correct me if I'm wrong): The home team gets an automatic three points. For instance, if two teams were dead even all things considered, the home team would be a three-point favorite. If the home team were Idaho, and anyone with a banal understanding of football came to town, instead of the spread being 28 points, it would be 25 points.

Well, can we all agree that Virginia Tech will essentially have a home game in Washington D.C.? Don't get me wrong; there will be a ton of Bronco fans in attendance. But the Hokies will have the majority of the crowd, they will have the shorter travel, and they will have the experience of playing in the thick humidity of late summer East Coast.

Installing the Broncos as favorites over the Hokies says a lot about how the country regards Boise State. The country hearts them. Almost as much as it hearts oil spill bird victims.

Would you take the Broncos at plus-2.5?

Of course you would. The real question would be how high the line would have to go before you start having second thoughts. Five points? 10 points? 20 points? I'd start feeling uncomfortable once it got to the teens. How about you?

Where does the line go from here?

Over the next several months, the line for this game is likely to fluctuate based on factors such as injuries, team announcements, and how soon I am able to access the college savings account of my unborn daughter.

Will it go up? To do so, gamblers must be pretty confident that Boise State will win by three or more. Will it go down? If so, then the public is much higher on Virginia Tech than previously thought. I will be closely monitoring this situation because betting on sports is my new retirement plan.

The Broncos are 14-point favorites over Oregon State. I guess I'm not the only one who still remembers this:

The Golden Nugget casino, purveyors of this initial list of odds, went as deep as 200 on its Games of the Year betting cheat sheet. Not all Bronco games are included yet, but these ones are:

Other games of note

These are the games that stood out most to me looking down the list (home teams are in bold). What ones caught your eye?

What lines stand out to you? Think Boise State deserves being favored against Virginia Tech? Surprised at how big of a favorite they are against Oregon State? Leave your thoughts in the comments.