Boise State accepted an invitation to join the Mountain West Conference today, as first reported by ESPN's Joe Schad and since confirmed by Boise State and the Mountain West. What caused the deal to go down just five days after the waiting game began?  Are Bronco fans happy despite this week's non-invite? Keep checking back on this post for updates. Leave your thoughts about the long-awaited move to the MWC.

Update 1:00p.m.: Report from teleconference: Mountain West has reached out to other schools, Thompson would like nine-game schedule, and apparently no one else is leaving ... yet.

What happened between Monday and now

Obviously, a lot has happened since the Mountain West presidents convened in Wyoming on Monday only to end the meetings with the decision to wait and see how expansion would go. Expansion has gone absolutely nutty, so I wouldn't be surprised that the Mountain West recognized its terrifying place on the outskirts of mayhem and made a rational decision to grab the closest thing they could. Ipso facto, Boise State is in the Mountain West.

But seriously, what really has happened since Monday? Officially two things.

One might assume that the Mountain West's 96-hour moratorium on invitations was due to the fact that they wanted Colorado. Once the Buffs went to the Pac-10, the Mountain West had a good cry then stepped up to the Treasure Valley to claim its consolation prize.

Does that mean Kansas was never a serious option? Was a three-team Big XII leftover raid not a real possibility? We may know more when the official press conference begins at noon. Until then, theorize in the comments please. The wilder, the better.

Update: According to SI.com:

In other words, the Mountain West realized "our bad." 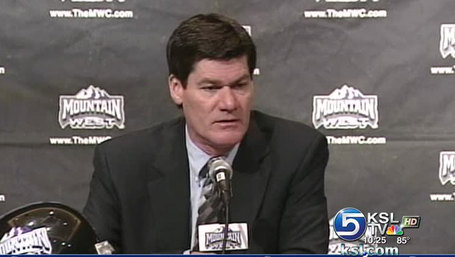 Craig Thompson, drinking from fountain of death. (via www.ksl.com)

Forgive and forget? Not me

You may remember on Monday when you, me, and hundreds of our Bronco friends swore up and down that the Mountain West would pay for its insolence and that we could never forgive them for snubbing our beloved Broncos. Feel any differently now?

I don't. But then again, I'm growing increasingly curmudgeonly.

Just because the Mountain West extended an invite eventually does not mean that I will block my indignation from my memory. Besides, memory blocking only works on the Taylor Tharp era. No, I am still rather hot under the collar, and there is even a little part of me that is disappointed that the Broncos still said yes to the Mountain West. They at least could have played the "We would like to wait and see how things play out" card. I hear that is a very popular card.

As it is, the Broncos are in the Mountain West, and I now hate the Mountain West, so I want more than ever for BSU to ravage its way through the entire conference schedule, leaving nothing but shattered dreams, broken hearts, and Craig Thompson's toupee in its wake. You do not want to get me angry because I will totally live vicariously through my team.

Teams that Boise State will start beating as of 2011

As I was distinctly told in an Idaho Statesman story last week, there would be no decision from the Mountain West until June 21 because UNLV president Neal Smatresk was out of town.

There are only two possible reasons why this decision happened with Smatresk on vacay.

And I do not peg Smatresk for a cell phone guy. 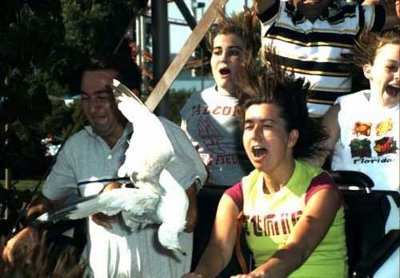 The rollercoaster is not over yet so stay seated

Oh, and maybe Kansas and Kansas State and/or Missouri are joining.

That all remains to be decided as the drama of conference realignment continues to unfold before our very eyes, like an uber important episode of The Biggest Loser (the biggest loser = Big XII). What will the Mountain West's next move be? Or is it done moving? Theories are welcome in the comments. I'll try to come up with a few of my own.

From the official announcements by the MWC and Boise State.

The MWC continues to strategize regarding potential membership scenarios and bringing Boise State into the Conference is an important part of that evolution.

In other words, Craig Thompson is still kind of bummed about Colorado.

It will be a privilege to compete and partner with such a successful group of member institutions.

The Western Athletic Conference has been an integral part of our growth and success. We will always be proud of our affiliation with those schools and thankful for the opportunities.

And the free football trophies every year.

The Mountain West eschewed cameras and podiums in favor of BlueTooths and poor reception for its press briefing on Boise State joining the conference.

The most important nugget to come out of those discussions: Craig Thompson has been talking to people.

But not just any people. Thompson has his eyes on Big XII teams, presumably some combination of Kansas, Kansas State, and Missouri.

(The Mountain West ) hasn't invited anyone else, but has reached out to other schools, including Big 12 teams. "I've had conversations last night and through this morning ... with several institutions. I know that both board members and athletic directors are reaching out similarly just to get a sense of where institutions' minds are these days."

Other notes from Chadd Cripe's reporter's notebook of the teleconference are these:

Twitter blew up (not literally, that would have killed J Bates) today with news about Boise State's Mountain West move. I tried to keep up but failed horribly. Here is what I could grab before I got hopelessly lost.

Lots of good questions and topics that hopefully we'll get into more in-depth next week. The first one from Loque:

Now that we're in the MWC, maybe College Gameday will come to Boise.

Does addition of Boise make Utah, BYU or TCU less likely to leave? Ummm, probably not.

Again with the Joe Schad:

If you're the WAC do you still spend big $ to promote Boises national title campaign?

MWC to move by July 1 for BCS AQ consideration. Prob didn't think B12 leftovers could be added by then. Boise great add

And finally, Graham Watson welcomes the news with all the enthusiasm of an atheist at Christmas:

In other news, Boise State joins the MWC. Makes sense with CU off the table. Keep an eye on Utah

The Broncos were slated to play both Utah and BYU in 2011 as nonconference games, but that has obviously changed now (and may change back, pending what happens with Utah et al). What will happen with the schedule? We've discussed it some already, and a lot will depend on whether or not the Mountain West goes with the nine-game sked or the eight-game.

At any rate, the Broncos will have to start working in a series with the Vandals and hope against all hope that something fiscally irresponsible happens with the Miami (OH) football program. Otherwise, there will not be a whole lot of wiggle room in 2011.

The Mountain West is not interested in any other WAC teams.

Thompson says "not envisioned" any other WAC teams would be approached by MWC.

In mid-May, I wrote a story about what the Broncos should demand pending a move to the Mountain West. These were those things.

Strange enough, I still believe all those things, which usually doesn't happen with stories I write a month ago.

Parting is such sweet sorrow

The WAC has released a statement about Boise State's departure, and you'll excuse them if they are an hour or two late. It is hard to write when you are listening to Dashboard Confessional in the dark.

While I am disappointed that Boise State has elected to leave the WAC, I am very optimistic that the WAC will continue to have success in the future and that this change in membership will allow us to build even a better WAC for the future ... We have a very strong foundation of schools going forward and others that are showing vast improvement in their athletics’ programs, and I expect that one of these teams will do just that – step up and perform. And as I have said many times – when schools join the WAC, they get better ...

The WAC Board of Directors will begin immediately to evaluate possible replacement teams.

Gene Bleymaier hints that it won't happen, and Boise State's schedule seconds it, pending an announcement about a nine- or eight-game conference schedule.

Of course, this could all change in a week or so anyway, so let's bring it up again then.

In the biggest upset of the day, BSU President Bob Kustra made it through an entire press conference without breaking into song. He did, however, extend his metaphor of Charlie Brown kicking a football held by Lucy and proclaim that Boise State is keeping its blue turf. Plus, high fives all around. The boxed wine will flow freely at the Kustra house tonight!

Note: There were apparently plenty of good seats available at the presser.