We've got 88 days until kickoff ... so today we'll be taking a look at number 88 on the Bronco roster - Mr. Chandler Koch.

Koch came to Boise State in the soon-to-be-famed 2008 recruiting class. A star at Flower Mound, Koch was the No. 3 tight end in the Dallas/Ft. Worth area, which is infinitely more impressive than being the No. 3 tight end in the Idaho Falls/Ririe area. ESPN.com had him as the 35th best TE prospect in the country. He most likely would have been higher on everyone's radar except that he never had more than 400 yards receiving or two touchdowns in high school. He is what you call a "well-rounded" tight end, which I guess is boring to some people.

He had other offers from Houston, Colorado State, New Mexico, and San Diego State, so I venture to guess that his LOI Day decision-making lasted all of nine seconds. Hmmm, middling MWC schools or Boise State Ruler Of All It Sees? Even Idaho QB Brian Reader could have made that decision in a timely manner.

I imagine kids in school used to call him "Crotch" because that is something I totally would have called him in school (not to his face, obviously). Nowadays, I bet teammates just take turns calling him different character names from Friends because that show had pretty much the only other Chandler I have ever heard of. 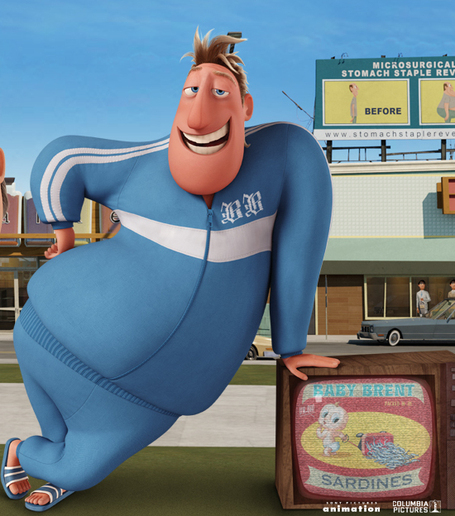 Baby Brent from Cloudy with a Chance of Meatballs. "Uh-oh!"

Koch's career highlight thus far may have been the season-ending injury to Richie Brockel last year, as it sent Bronco fans scurrying to their laminated roster cards screaming, "Who is that giant teenager getting more snaps at tight end?! And where is my Blue Turf Towel?!"

Redshirting. It's the pits.

Depending on whom you ask, Koch is either the No. 3 or No. 4 tight end on the depth chart, unless you ask Mark Johnson, in which case the response would be, "You mean Chris O'Neill?"

I believe he'll be the No. 3 TE target, ahead of senior Sean King, and I can see him filling much the same role that Brockel did last year, lining up in the backfield and motioning every which way as well as pounding away on the line in running situations. Which type of Bronco tight end will Koch turn out to be? I venture to say that 2010 will give us the best clue yet. If he continues in the mold of a Tommy Gallarda mauler, bully for the Broncos. But don't be surprised if he goes the way of the Efaw and turns out to be a prolific pass catcher. He has the size, strength, and athletic ability to do either, so it may depend on what type of circumstances he finds himself in this year.

Someone wrote a rap about Koch's hometown of Flower Mound, Texas.

Oh. My bad. That fact wasn't made up at all.