Public Enemy number 1: The case for Mark May

Share All sharing options for: Public Enemy number 1: The case for Mark May 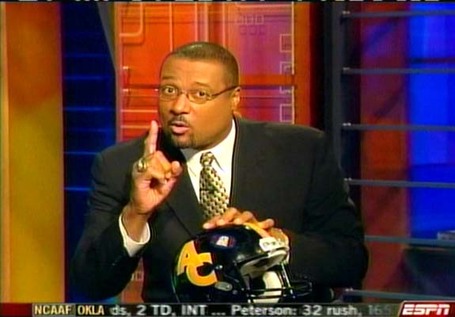 Like Tom Hanks and Peter Scolari, Mark May and Craig James are bosom buddies. Both have parlayed successful playing careers into successful gigs as insufferable talking heads and both are 100% cat-in-the-bathtub insane. Kevan waxed poetic (and waxed off at Mr. Miyagi's prompting) about Craig James' high crimes yesterday...well, it's high time that someone held Mark May to account as well. As you'll see after the jump, Mark May has been quaffing the Boise State Haterade for quite some time...and I'm just scratching the surface.

Remember May when you enter the voting booths, good citizens of OBNUG.

No talking head has more personified the respect deficit that the Broncos seem to encounter year after year than Mark May. Sure, there are others, some even in ESPN's employ, that will echo May's sentiments from time to time...but Mark May is one of ESPN's big guns...and frankly, he should know better.

See, Mark May's great crime isn't being a Bronco sayer of nay...it's that he can't keep his trap shut about it. Now, even if you are a highly paid analyst for a certain sports network,  you'll make the wrong call now and again—heck, you might even have a nice little gig going playing devil's advocate. But when a pattern emerges of brazenly scoffing at facts when it doesn't fit your personal narrative about a certain team that plays on blue turf—you sir, may just be Public Enemy numero uno (in honor of Cinco de Mayo).

The Broncos are used to being underrated, overlooked, and outrecruited...hell, it wasn't until about a year ago that the talking heads started to notice that Boise State had a little bit of talent to go with it's trickeration and camouflaged uniforms. Surely, mid-majors as a whole fight the same uphill battle for respect year after year...so it's no real surprise when the "non-AQs" climb slowly in the polls or are lambasted in hypothetical conference realignments ("Boise State would lose by 80 points every game if they played in the ACC") It IS a real surprise (sadly, less and less lately, given the source) when a team like the Broncos—one of the most successful teams in the nation over the last decade—are said to have no credibility even in a lateral conference move...like to the Mountain West. But hey! That's exactly what Mark May did when he said that the Broncos would be a four-loss team if they had played in the MWC...this, of course, after posting an undefeated regular season in 2008...for the 3rd time in 5 years. Easy to forget, that at that time, Boise State was 13-0 against MWC competition. To this, I'm sure Mark May deftly replied: "SO?!"

But Mark May learned his lesson, right? I mean, it was all the way back in 2008 when he made that dubious prediction...and yeah, I guess the Broncos did lose to MWC runner-up TCU in the Poinsettia Bowl by 1-point...so surely BYU, Utah, and Air Force(?) would've had their way with the plucky Broncos as well. Eh...not so much. After the Broncos thumped (remember that word) a Rose Bowl-bound Oregon team in 2009 and rampaged through their schedule for a second straight year, eventually going 14-0 and avenging the previous year's lone loss to TCU—the 2010 Broncos squad just isn't much on May's radar. This is a team that finished #4 in the nation in 2009 (no thanks to yesterday's entrant) and return basically their entire team, mind you. Mark May, upon releasing his 2010 preseason top five*, has the Broncos nowhere to be found. Surely, May has the Broncos at 6 though...if only his poll went to 10! Well, that's probably not the case...

"After they get thumped by Virginia Tech, I don’t know how you can say they’ll come back and be a top five team with that schedule.

Really? Was saying "double-digit loss" twice necessary? The first one stung a bit and the second one was like squeezing lemon juice on it. Who are you, Biff Tannen? Nope...just Mark May, ladies and gentlemen.

Sure Virginia Tech will be a darn good squad. The Broncos will have to fight hard for that win...but May's complete brush-off of a Bronco squad that by all rights should be the favorite in that contest (and likely ranked higher) speaks volumes about May's petty, BCS elitist mentality. Come on...for a hater like May, wouldn't the smart play have been to prop up the Broncos to set up his smug "I toldja so"s when his half-cocked "analysis" rang true? May can't even get that right...and the Broncos, all too predictably, will have him eating his words yet again. 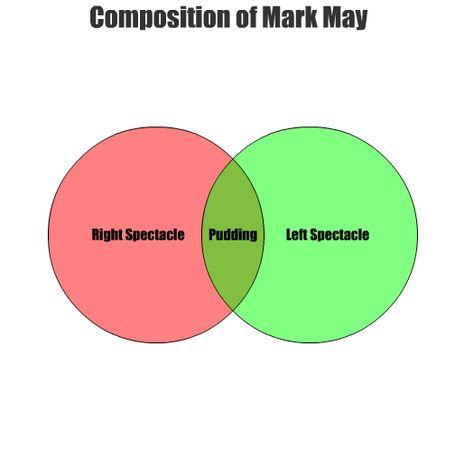