Hard to believe, but we are officially under 100 days until the Broncos storm the Capital to take on the Hokies. As you may remember, last summer we embarked on the Herculean task of counting down a different roster spot for each remaining day until kickoff. Well, I burned out after about 30 days and the countdown was spotty at best until the Ducks rolled into town. I've recommitted myself this offseason however, and I'm shooting for 100 percent this time around.

We've got 99 days until kickoff...so today we'll be taking a look at number 99 on the Bronco roster—Michael Atkinson.

Atkinson's recruiting was a happy accident. Bronco coaches visited his alma mater to offer teammate Tyrone Crawford a scholly and couldn't help but notice the behemoth Atkinson, who had been playing fullback. Crawford had to go the JC route (eventually landing with the Broncos in the 2010 class), but Atkinson got his ducks in a row and joined the Broncos in short order.

Atkinson's ample girth and country of origin made this nickname a slam dunk.

After redshirting in 2008, named the Defensive Scout Team Player of the Year. Played in nine games in 2009, and registered a pass breakup and TFL. Delighted fans at Fall scrimmage by scampering 30+ yards on an offensive dive play. 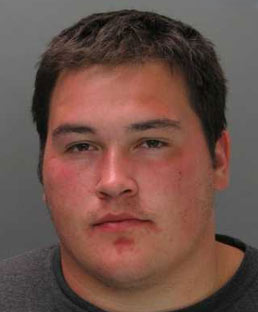 He fought the law. The law won.

Atkinson dealt with injuries and off-field issues that severely limited his playing time in 2009. He'd do well to get both issues in order before September rolls around or he could get snowed under in one of the more robust Defensive Line rotations the Broncos have ever had. A solid (and we mean solid) backup DT, Atkinson commands double teams and could be one half of a human wall if he ever lines up next to incoming recruit Ricky Tjong-A-Tjoe. Atkinson didn't put up dazzling stats in 2009, but he made his presence known simply by being huge and imposing. Wanna know one reason why Andy Dalton never saw Kyle Wilson coming in the Fiesta Bowl? Well, he had bigger things to worry about—much bigger: 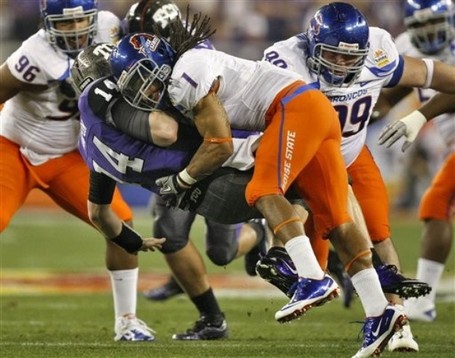 Atkinson was originally cast for the part of Juggernaut in X-men 3, but his understudy, Vinny Jones, got the actual part after a scheduling conflict made his participation impossible.