Public Enemy No. 1: The case for Colin Kaepernick

Share All sharing options for: Public Enemy No. 1: The case for Colin Kaepernick

A proper Public Enemy No. 1 debate would not be complete with Nevada QB Colin Kaepernick. The Wolf Pack's pass-averse quarterback has had varying turns as Bronco killer and Bronco bait, but his latest role is one that could top them all.

After the jump, find out why Kaepernick finds himself on the Public Enemy ballot for the third year in a row, and share your thoughts on what grinds you the most about the Nevada QB.

Kaepernick is the dynamic, dangerous quarterback for the Nevada Wolf Pack whenever the Wolf Pack are playing a bad team. The rest of the time he is a faulty, anthropomorphic Juggs machine.

Reasons to let Kaepernick off the hook

Kaepernick has become less and less of a threat to Boise State as his career has progressed. Are you afraid of Colin Kaepernick? 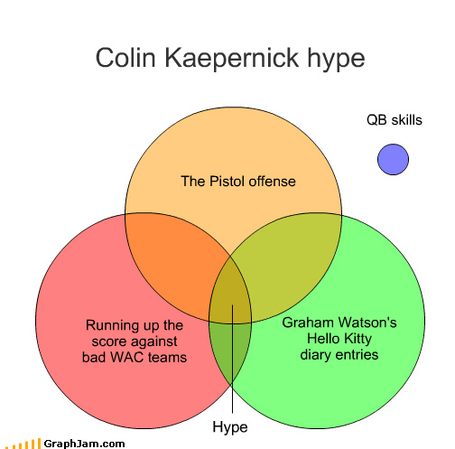 This is Kaepernick's third nomination for Public Enemy No. 1, meaning you can add Public Enemy to his list of things he has never won, right beside "a game against the Broncos" and "a WAC championship." 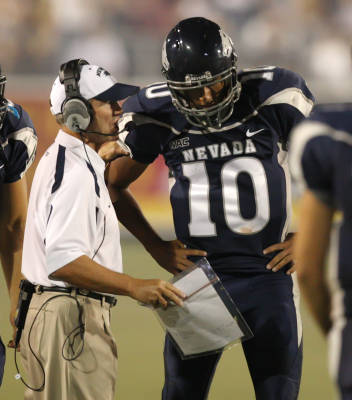 "Go to my first read, skip the rest, and scramble. Got it." (via image.cdnl3.xosnetwork.com)

Colin Kaepernick is many things - talented, elusive, basically a running back, gangly, a 22-year-old man trapped in the body of a 16-year-old girl. And now you can add a Peyton-Manning-enigma-wrapped-in-a-Tim-Tebow-role-model.

The 2010 WAC football season, when it isn't about Boise State's quest for a national championship, will be about Colin Kaepernick's quest for a WAC championship. He is the postertwig of WAC football - the well-known leader of the country's best run game. And once the nation finds out he is searching for that elusive conference title in this his last chance as a senior, well you can cue the Desmond Howard feature because that storyline is going to get covered into the ground.

Kaepernick has two things working for him this season. First is the growing unrest that he has yet to develop into a complete quarterback. Reports out of UNR's spring game, were less than cordial toward Kaepernick's performance:

But after quarterback Colin Kaepernick threw three interceptions against last season’s second-worst secondary in the nation in a game where the defensive line couldn’t hit the quarterback, you can’t tell me you’re not worried.

But even a highly disappointing spring game is not enough to dissuade media types, like Sports Illustrated who lists Kaepernick as the 2011 draft's No. 29 prospect, from holding out hope.

This terrific athlete has really developed as a signal-caller the last two seasons. He has big-time abilities and could be rated much higher in a year's time.

The media will be on board with the Colin Kaepernick 2010 Farewell Tour, and instead of standing back in awe at his remarkable football skills as they have done in regurgitated features throughout his career, they will be rooting for him to succeed and develop and take the ultimate step into the well-rounded passer he'll need to be in order to fulfill his WAC football legacy. Can you say barf?

As if the Manning-like media crush isn't enough, Kaepernick also has Tim Tebow-like qualities going for him. Like Tebow, Kaepernick is a talented quarterback, and he is apparently a likable one.

Another Wolf Pack athlete worth noting is Kaepernick. I’m reminded of his squeaky clean image and undying faith in Jesus fairly often on Facebook. After a night of excessive drinking and coming home, reading a Kaepernick post really makes me want to reconsider the decisions I’ve made. He’s a class act.

But just as I excessively drink, Kaepernick excessively befriends people. He has more than 1,600 friends, as of Monday.

Driving wayward souls to sobriety? Someone alert Peter King's 10 Things I Think I Think. We've got a live one.

When you combine Kaepernick's last ride with the Wolf Pack with his renowned reputation for being a good guy, the result is going to be a media buffet of Kaepernick praise. If you thought you were sick of reading stories about Kaepernick's great quarterback play, get ready to be all kinds of new sick over feature stories on Kaepernick's determination, drive, and will to win.