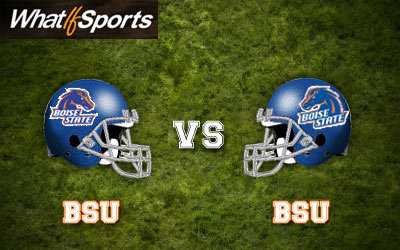 Which Bronco team from the last eight years is the best? A fancy pants computer thinks it knows.

Winners advance to play winners. Losers live on in the memory and anecdotes of Tom Scott.

The '05 Broncos were not a bad team, per se, at least not until you set them alongside a Space Jam roster like 2009's. Then it is like comparing Caldwell, Idaho, with Branson, Missouri. Branson totally has a rollercoaster! The 9-4 '05ers had Jared Zabransky at his worst and Dan Hawkins with one foot out the door. In the average sim between the 2005 and 2009 squads, Zabransky goes 3-for-9 passing and the bad Broncos get outgained by nearly double. No matter. The Crucial.com Human Bowl has no regrets.

Upset alert! If you had the 2006 Statue Left Broncos as one of the favorites in this tourney, then how dare you doubt Brock Forsey and his magnificent running skills. Forsey, Ryan Dinwiddie, Bobby Hammer and gang took the edge over the 2006 Broncos - widely considered one of Boise State's best teams of all time. How did they do it? According to the computers, it took 100 yard games by Forsey and David Mikell, three field goals by Nick Calaycay, a Trent Lundin touchdown, and a sack and pick by Travis Burgher. Ain't no party like a Travis Burgher party 'cause a Travis Burgher party don't stop. (Note: Can someone remind who Travis Burgher was again?)

Was the 2002 team seriously capable of hanging with the 2006 Broncos? Well, their upset is not a complete shot in the dark. In 2002, the Broncos went 12-1 and 8-0 in the WAC, losing only to Arkansas on the road, and scoring the school's first Top 25 ranking as a I-A program. Plus, Human Bowl championship trophies meant more then. Apparently.

Another fabled Bronco team falls in this one as super good 2004 BSU catches upset flu. The bearer of bad news: 2003 Boise State, led by senior Ryan Dinwiddie. The 2003 team, if you can remember back that far, was Fort Worth Bowl champion and 12-1 overall. And apparently, they were significantly better than the 2004 version, in ways exceeding the obvious Zabransky-for-Dinwiddie substitution. In simulations, 2004 BSU manages a New Mexico State-esque 197 total yards. Someone wake Gene Wojciechowski from his defensive struggle-induced coma.

The odds were not in 2007 Boise State's favor, and neither were the linebacker play and the Taylor Tharp play. 2008 Boise State, though not a BCS bowler, was a very, very good team. 2007 Boise State was not especially, and history will never forget that. WhatIfSports found matchup problems across the board, from Tharp's struggles against good secondaries to 2007's porous run D. Because if 2008 Ian Johnson rushes for 160 yards on your defense, you're doing defense wrong.

The 2002 team's run was fun while it lasted, but it ends in a matchup with the 2009 juggernaut. In many ways, this was a lot like pitting a Sega Dreamcast against an XBox 360. Sure, the Dreamcast was tons of fun during its time, but technology and advancements make a comparison awfully lopsided. Still, we'll always have Sonic's Big Adventure. And we'll always have 2002 Lou Fanucchi.

Not that this is at all representative of 2009's utter dominance of 2002, but here's a boxscore of this semifinal that ends in a 5-overtime, 76-71 barnburner. Why go for two after the game-winning touchdown, 2009 Broncos? I sense some ill will.

The 2003 Broncos put up a valiant fight, but five years of high-class recruiting and some kid named Kellen Moore were too much to overcome. In the pensive Brian Murphy columns that would certainly be written if these games really happened, one of Murph's questions (after "Why were there Bronco fans leaving the stadium in the fourth quarter? This would never happen in SEC country!") would have been: "Can the plucky, blue collar, underdog play of Broncos past overcome the extra talent of Broncos present?" WhatIfSports would like to start a Statesman user account and answer, "No."

Would this have been the final-two matchup you would have chosen? The argument is typically made to include 2006 Boise State here, but that's why they play the fake simulated game, right? A 2008 vs. 2009 matchup would be pretty stellar, if not a little creepy. Kellen Moore vs. Kellen Moore. Jeremy Avery good backup vs. Jeremy Avery beleaguered starter. Spin-o-rama Byron Hout vs. assault victim Byron Hout. Just hope Mark Johnson isn't doing play-by-play because that could get confusing.

In the what-have-you-done-for-me-lately world of WhatIfSports, the fresh-faced Fiesta Bowl champions get the slight edge over one-loss, no-hype 2008 BSU. The maturation of Moore seems to make the difference here. His improvement from 2008 to 2009 (and a 54-yard TD pass to Austin Pettis) are enough to put the 2009 Broncos over the top.

Congratulations, 2009 Broncos. Make some more room in that fatty trophy case of yours.

A final word from our sponsor

Agree or disagree with the way the tournament played out? Is the 2006 Boise State team overrated? Are the Dinwiddie teams of 2002 and 2003 underrated? Share your thoughts in the comments.