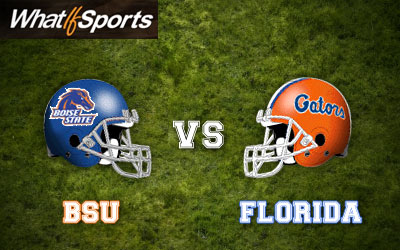 Boise State's 2008 season could have very easily gone down as one of the best in school history were it not for an undefeated Utah, a really good TCU, and an annual fail by the BCS. Things worked out much better for Florida and golden child Tim Tebow as the Gators rolled to a second national championship in three years.

What if the undefeated Broncos had a shot at the No. 1 Gators? Would history have turned out any different? WhatIfSports helped give an answer, although in hindsight I wish I had never asked. Get the details after the jump.

Mark May might not think it is a big deal, but he typical reserves "big deal" declarations for Lenscrafters half-off sales and Nutri-System peanut buster parfaits. Fact is, Boise State was deserving of a BCS spot thanks to a sparkling regular season, including a big win at Oregon. The Broncos were one of college football's elite teams in 2008, so it is only natural to wonder how they would have fared against the best team in all the land.

Of course, the Gators were hardly the consensus "best team" once the regular season ended. As per usual, the BCS found a way to leave pretty much everything open to debate.

In the end, Florida proved pretty deserving of its national championship, despite the fact that Utah steamrolled Alabama in the Sugar and finished as the only undefeated team in the country. Were the Utes better than the Gators? WhatIfSports says no. Were the Broncos better than Florida? Let's find out.

The WhatIfSports computers ran 1,001 simulations of Broncos-Gators at a neutral site and with full rosters. I really hope the neutral site was not the Poinsettia Bowl.

The Gators won 76 percent of the games played against the Broncos. 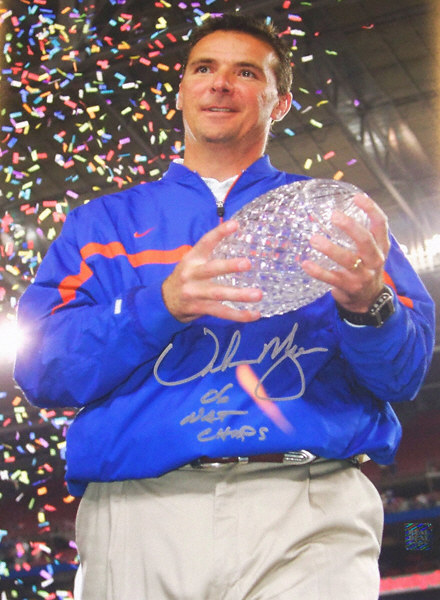 The 2008 Boise State defense may have been the school's best ever unit, and it shows in the boxscore as Heisman runner-up Tim Tebow managed only the stats of a San Jose State quarterback: 7 completions, 102 yards. He did go all Andy Dalton in gaining 74 yards on 15 carries, but what team didn't give up 74 yards rushing to Tim Tebow in 2008?

The Bronco offense was not exactly a well-oiled machine either, but they managed. Kellen Moore threw touchdown passes to Kyle Efaw and Jeremy Childs. Jeremy Avery did what Avery did best in 2008: outrush Ian Johnson pretty significantly. The biggest difference in the game turned out to be time of possession. Florida held the ball for 36 minutes, the Gators never trailed, and Gene Wojciechowski found it thrilling. 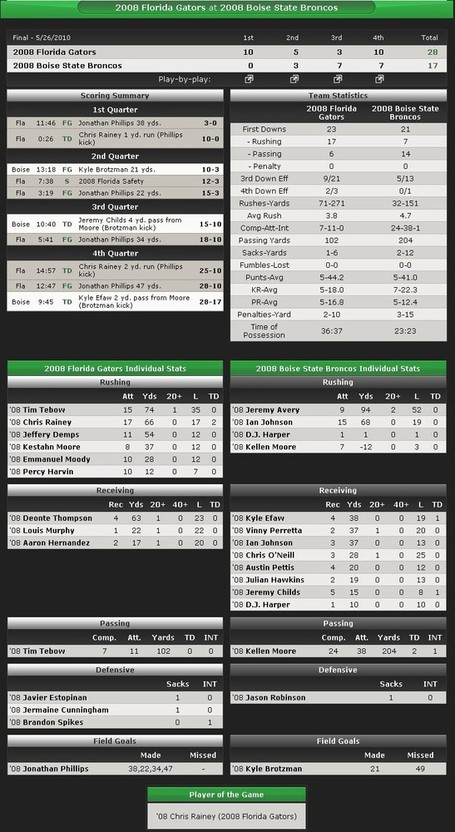 What can computer simulation teach us that Bejeweled has not

I do not think I am alone in considering the 2008 Boise State football team to be one of the school's best. If TCU had beat Utah when they were supposed to, the Broncos would have been BCS-bound. If Boise State had brought good Kyle Brotzman with them to San Diego, the Broncos might have finished 2008 undefeated. Had just a few little things gone the Broncos' way in 2008, we could be talking about the '08 team with the same reverence as we do 2006 and 2009.

But if there is one thing that the WhatIfSports simulations have taught me, it is that I am very wrong.

Were the Broncos really as good or better than 2008 Utah? I say yes. WhatIfSports says no.

Was BSU really better than 2008 TCU and the P-Bowl loss was just a fluke? Still no.

I love computers, but I don't have to like them right now.

WhatIfSports did me a big favor by providing the simulations for this week. I can only assume I am doing them a big favor by reprinting the following two paragraphs.

Make Jeremy Avery the starter if you have to.

WhatIfSports Week concludes tomorrow with a Boise State vs. Boise State tournament that will most certainly not put to rest what Bronco team is the best ever but will certainly be entertaining to say the least.