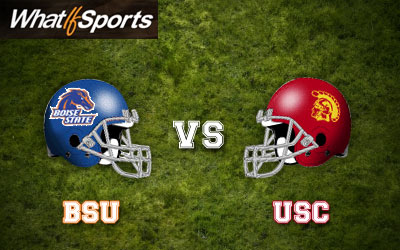 Even without playing in a BCS bowl, the 2004 season was one of Boise State football's finest. Turns out, USC was pretty good that year, too.

How would the undefeated Broncos have fared against the two-time national champion Trojans? Were the Broncos more deserving of a shot in the title game than any of the other undefeated teams? The WhatIfSports computers ran the simulations, and the results are in. Put the children to bed and join me after the jump for the lopsided outcome.

As is pretty much the norm in non-Taylor Tharp years, the 2004 Boise State football team went undefeated during the regular season and held a 22-game winning streak entering its Liberty Bowl matchup with Louisville. The Broncos finished the regular season ranked No. 10, with big wins over Oregon State and BYU and slightly smaller wins over San Jose State and Tulsa. Still, undefeated is undefeated, right? /Mark May shaking head no

There was also plenty of Jared Zabransky to go around as 2004 marked the definitely okay sophomore season for the Bronco QB. Zabransky handed off to Lee Marks, who ran behind Daryn Colledge, who sat on the sidelines watching Andy Avalos, Alex Guerrero, and Chris Carr play defense. By all intents and purposes, it was a really fun year to be a Bronco fun, right up until 59 minutes, 59 seconds of the Liberty Bowl.

2004 was also a good year to be a USC fan as the '04 Trojans may be one of the best college football teams of all time. This was Matt Leinart and Reggie Bush during their heyday, and 2004 saw the Trojans go wire-to-wire at No. 1 nationally, winning their second national title in two years. Remember the national championship Orange Bowl? Bob Stoops most certainly does not because it has been scrubbed from his memory and he may have not actually been mentally present during it anyway. His Sooners lost 55-19 to the Trojans.

Boise State and USC each finished the regular season undefeated in 2004. Aren't you curious what would have happened if the two teams had met? (Hopefully "yes," because otherwise this article isn't going to mean much to you.)

The WhatIfSports computers ran 1,001 simulations of 2004 Boise State versus 2004 USC at a neutral site with full rosters. Why 1,001 simulations? Because the computer just loves to rub it in my face.

The Trojans won 92 percent of the games played against the Broncos. 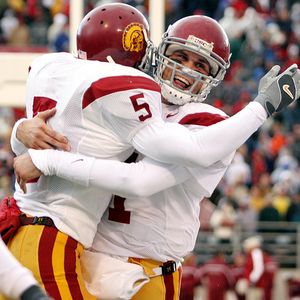 "Yay! We will never be as good as we are right now." (via a.espncdn.com)

At least they weren't all blowouts right away. In this one, the Broncos trailed only 17-7 at halftime, getting points on a Lee Marks TD run and giving up points on touchdowns by balloon animal impersonator LenDale White and possibly fake person Jason Mitchell.

USC took a 27-7 lead early in the third thanks to a TD run by Reggie Bush, but the Broncos jumped right back into it with 10 unanswered points before the fourth, courtesy of Lee Marks' second TD and a Tyler Jones field goal. Then Matt Leinart struck again and Jared Zabransky did not, making the final score 31-17 which is close enough that I could tell my grandkids in 30 years that the Broncos won without feeling too guilty.

The boxscore credits LenDale White with MVP honors for his 152 yards on the ground, but I am casting my invisible vote to the USC defense for holding Zabransky to 139 yards passing and minus-13 yards rushing (on 11 carries). 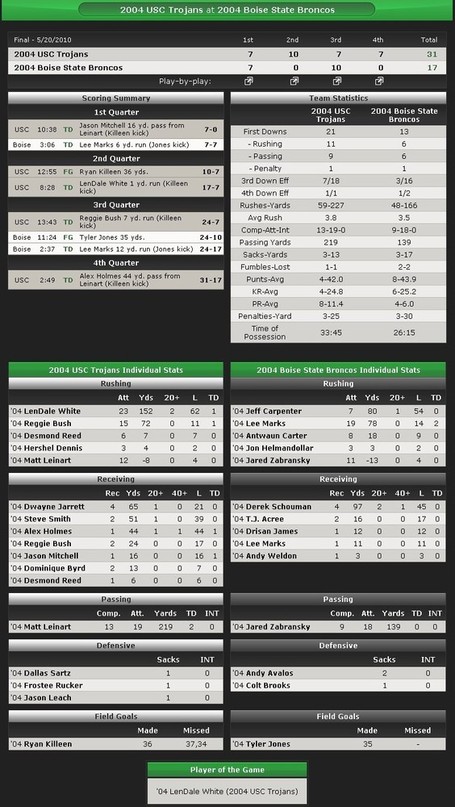 The WhatIfSports computers may have a mancrush on the Pete Carroll era at USC, but I think it's important to note how much closer the simulated games between Boise State and USC were than the actual, real life game between USC and national No. 2 Oklahoma. Was Boise State a more deserving team than the Sooner one that got stomped?

There were actually five undefeated teams at the end of the 2004 regular season, which obviously meant nothing to the BCS computers. Boise State was not the only one that got shafted by the bowl announcements. Auburn settled for national-champion-in-waiting. Utah took the title of inaugural BCS buster with its appearance (and win) in the Fiesta.

Judging by the fact that USC was clearly the best team in football and that Boise State in 2004 did not match up particularly well, it may be more useful to see how the Broncos would have fared against the rest of college football's elite, undefeated teams.

The conclusion: Boise State may have deserved the BCS-busting title just as much as Utah. I will get the Orrin Hatch doppelganger on this immediately.

WhatIfSports went overtime on its simulation machine this week. Thank them by reading the following:

Simulate this game yourself

How many tries will it take you to get a Boise State win? First one to do it in less than five is most definitely a wizard.

WhatIfSports Week continues tomorrow with 2008 Boise State versus 2008 Florida. It's freshman Kellen Moore vs. godchild Tim Tebow. It's Ian Johnson with osteoporosis vs. Urban Meyer with giant ego. It should be good.