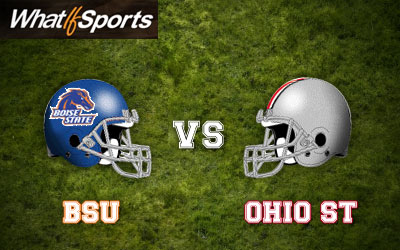 The Broncos and Buckeyes finished the 2006 college football season as the only two undefeated teams, not that that sort of thing gets you a bowl game against each other. The Broncos went on to beat Oklahoma in the Fiesta Bowl, and the Buckeyes went on to lay an egg in the title game. What would have happened if BSU and OSU had met in the postseason?

Thanks to the computer magic of WhatIfSports, we have an answer. After the jump, find out how Jared Zabransky and company might have fared against Troy Smith and the Buckeyes. Plus, is Ian Johnson circa 2006 the greatest computer simulation running back of all time? Let's find out.

Boise State's 2006 season is often remembered as Boise State's 2007 Fiesta Bowl - a single, glorious year encapsulated in a thrilling, historic victory against Oklahoma. Many Bronco fans think it may have been BSU's best team ever. There was a defense led by Korey Hall and Marty Tadman. There was good Ian Johnson taking handoffs from mostly-good Jared Zabransky. The Broncos finished 13-0 and at No. 5 nationally.

Ohio State completed a perfect regular season and earned the first ever perfect 1.000 from the BCS computers, a fact that would later lose a lot meaning because everyone knows BCS computers are janky. The Buckeyes had  a Heisman-Trophy winning QB in Troy Smith, a future NFL draft bust WR in Ted Ginn, and a defense led by James Laurinitis. By most all measures, they were the best college football team in the land to the extent that a Big Ten team can be considered the best. The Buckeyes lost in the BCS national championship game to Florida, and thus the Tim Tebow era began.

Want a good laugh? Jump in your Way Back Machine and take a look at the 2006 regular season BCS standings, before any bowl games were played.

Man, and we think the BCS has problems now. Is that really Louisville ahead of Boise State? A two-loss LSU?

The WhatIfSports computers ran through 1,001 simulations of 2006 Boise State versus 2006 Ohio State at a neutral-site field with full, healthy rosters. Computer Kirk Herbstreit picked the Buckeyes to win all 1,001 times.

The Broncos won 69 percent of the games played against the Buckeyes. 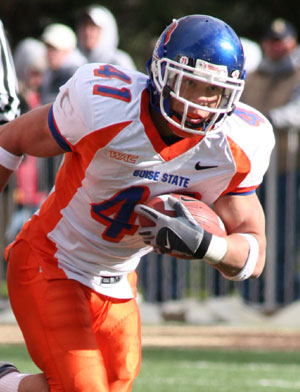 I am so nostalgic for Ian Johnson right now. In the majority of simulations for this game, Johnson was an absolute terror. In this particular sim, he had 227 yards and two touchdowns on 31 attempts. Just try keeping Chris Myers away from him during the postgame.

A scoreless first quarter led to a 7-7 halftime score, and then the Broncos really broke things open with 13 unanswered points in the third quarter and a Johnson insurance touchdown in the fourth. Somehow, Ohio State managed 188 yards rushing from Antonio Pittman and 19-for-28 passing from Troy Smith and still failed to do a whole lot of anything on offense. 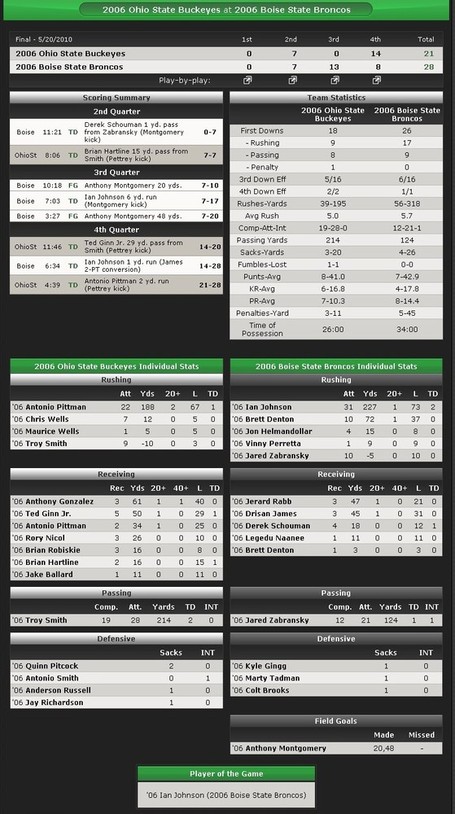 Well, for starters, the 2006 Boise State team was very, very good. A lot of debate has happened recently about what Bronco team of the past five years is the best one, and while computer simulation is not exactly the smoking gun of credibility, this result certainly deserves some second looks.

On a slightly unrelated note is this: Would you have wanted the 2006 Broncos to play another game after the Fiesta Bowl? At the time, many people were calling for the Broncos to face the national championship winner since, you know, Boise State was the only undefeated team in college football and whatnot.

What would you have preferred?

WhatIfSports was very generous to let me use their supercomputer for the week, so the least I could do is give them 100 words to upsell.

Re-live the Ian Johnson wonder years. Simulate this game yourself.

You can perform your own Boise State versus Ohio State imaginary game over at WhatIfSports. If Ian Johnson rushes for less than 100 yards, you're doing it wrong.

What If Sports Week continues tomorrow with 2004 Boise State versus 2004 USC. It is sure to be the most recognition Matt Leinart has received in years.