2009 Boise State versus 2009 Alabama: What if Broncos played for national title?

Share All sharing options for: 2009 Boise State versus 2009 Alabama: What if Broncos played for national title? 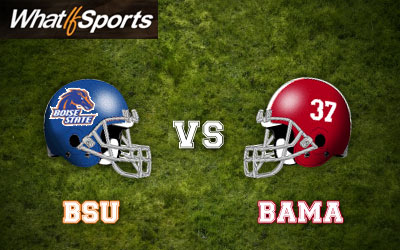 If you are anything like me, you have spent countless hours and numerous steno note pads figuring out how Boise State might have fared against last year's only other undefeated team, Alabama. Well, wonder no more.

The fine folks at WhatIfSports.com have partnered with OBNUG this week to right the wrongs of college football championships past. How would a game between 2009 national champion Alabama and 2009 Fiesta Bowl champion Boise State turn out? Should the Broncos have been the true national champions after all? Find out after the jump.

What If Sports Week runs through Friday with daily simulations of Bronco matchups that should have been.

The What If Sports computer performed 1,001 simulations of 2009 Boise State versus 2009 Alabama at a neutral-site stadium with the full, healthy rosters of each team. That means Austin Pettis played, and Mitch Burroughs played less. That had to bode well, right? ... Right?

The Crimson Tide won 88 percent of the games played against the Broncos. 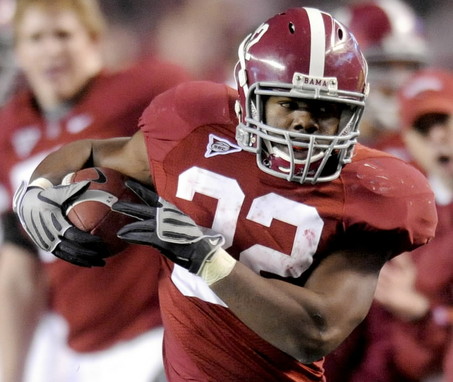 The Broncos jumped out to a 17-0 lead on Alabama, causing many to recall the auspicious opening of the 2007 Fiesta Bowl when BSU jumped out to a big early lead against Oklahoma. But the Boise State defense, channeling their best fourth-quarter Jared Zabransky, folded like a lawn chair at a J.P. Nisby cake walk.

The Broncos gave up 350 yards rushing to the Crimson Tide, including 141 yards to Heisman Trophy-winner Mark Ingram and 117 yards to Ingram's backup Roy Upchurch. The daunting ground attack wore down the Broncos, who finally surrendered the lead in the fourth quarter on Ingram's second rushing touchdown of the day.

On the ensuing possession, a Doug Martin 41-yard run put the Broncos inside the Alabama 10-yard-line, but Kellen Moore frittered away the golden opportunity with an interception, giving Phil Steele great joy. The Tide took over and marched down the field for another score, essentially icing the game. 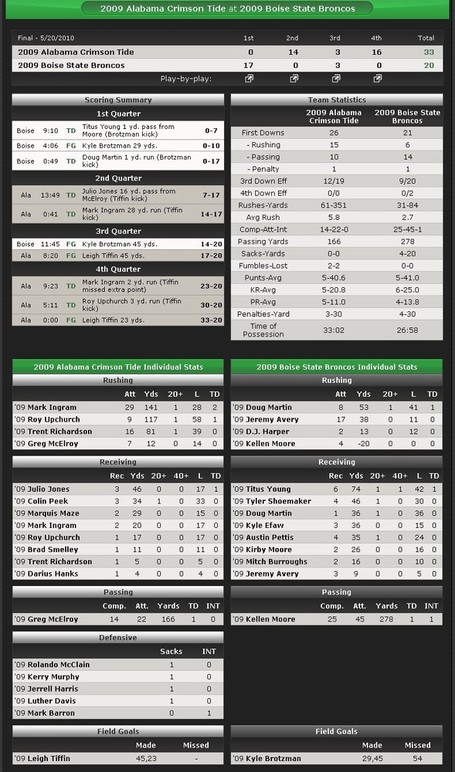 There are a lot of interesting discussion points to take from this apocalyptic simulation, and I encourage you to explore all of the ones that strike your fancy in the comments. Two stand out most to me. And they are:

Part of me thinks that the Crimson Tide winning 88 percent of the time against Boise State is quite believable. This is the part of me that I sold to Kirk Herbstreit in exchange for a College Gameday appearance of my choosing. The Crimson Tide were a very good team last year, not necessarily against Tennessee or when they weren't really feeling up to it, but a very good team nonetheless.

The other part of me thinks that even if Alabama would win 88 out of 100 games against Boise State, I would take the Broncos in a one-game national championship every single time. I understand how ridiculous and homerish that sounds - picking a team despite the loads of incontrovertible proof that I shouldn't. But what kind of Boise State fan would I be if I didn't believe wholeheartedly that my team would win no matter the situation? I would be the kind of Boise State fan who comes to the game for the social experience, that's what.

Could Alabama really run over Boise State the way the computer claims?

You're not the only one with access to the college football statistics database, simulation computer.

Yeah, that's not the Nevada vs. UNLV-type rushing disparity that the simulation implied. I highly doubt that the Broncos would give up 300-plus yards to the Crimson Tide on a regular basis. For starters, Justin Wilcox would have come up with a 7-2-2 or something crazy to shut down the running game. But if the boxscore above is just an isolated ground game incident, I guess I can buy the fact that lightning can strike anywhere once. Right, Ryan Mathews?

Many thanks to What If Sports for putting together this simulation for us. As payment, a blockquote or two:

Make your own destiny; simulate this game yourself

Please. Do it right now. And don't stop until Boise State has won and you have copied and pasted the box score into the comments.

What If Sports week continues tomorrow with 2006 Boise State vs. 2006 Ohio State. Any predictions?