Phil Steele is the king of college football preview magazines, and his annual publication is America's favorite preseason mag. But probably not in the greater Boise area.

Big-time credit to Polynikes for discovering that Phil Steele's list was out there, and bonus points to MKingery for Googling to find the link.

Just last week, I asked the question of whether or not the Big Three preview magazines would follow Lindy's lead and place Kellen Moore as a first-team All-American. Guess not.

For the love of BAD WORDS, Phil Steele. What were you thinking?

By almost any measure, Kellen Moore is easily within the top four quarterbacks in college football. Here is how Moore stacks up to the QBs Steele chose over him.

Potential for greatness in 2010 comparison

I can understand placing Pryor on one of the teams because he is the offensive leader of a Top Five team. To a certain degree, I get the inclusion of Keenum because he is a stat factory and Houston is expected to be very good this year. Jake Locker and Ryan Mallett? These ones make my head hurt.

If it were anyone other than Phil Steele making these predictions, I would laugh it off as foolishness because, seriously, Kellen Moore not on any of four All-America teams? That has to be a joke, right? But since it is Steele making the call, you have to wonder what could cause the preseason's best picker to leave Moore off.

A. Phil Steele only had the room/stomach to put one non-BCS QB on his All-America team.

Perhaps he chose Keenum because he thinks Boise State will not be 2010's BCS darling and that the Houston Cougars will be the ones crashing the BCS party. If that happens, I can understand his vote. Also, if that happens, xx

B. Kellen Moore will not put up good numbers because he'll rarely play deep into the second half during a WAC schedule of blowouts.

This one makes more sense, if only because it pretty much happens every year. Still, with it happening so frequently, Moore has still put up outstanding numbers while essentially being a part-timer.

Sadly, this one is entirely plausible, and it kind of scares me a little. Having Phil Steele not like your starting QB is like having Boyz II Men not like your soul, R&B album. If Boyz II Men doesn't like it, then how can it be any good?

Steele's opinion is based on lots of research and gametape, so it is not like he is pulling these All-America teams out of a hat. He has his reasons for leaving off Kellen Moore. I just hope it's not this one.

D. This is not Phil Steele's preview magazine and is instead a ruse engineered by Mark May.

Pettis was the only member of the Broncos to make Phil Steele's All-America teams, and he did so as the fourth-team wide receiver on teams that included three WRs. Also conspicuously absent were Ryan Winterswyk, Jeron Johnson, Nate Potter, and Titus Young.

In other preview magazine news

Ferd Lewis of the Honolulu Advertiser put his media credentials to good use and leaked the predicted WAC standings from the four major preview magazines. See if Ferd Lewis ever gets preview press releases again. 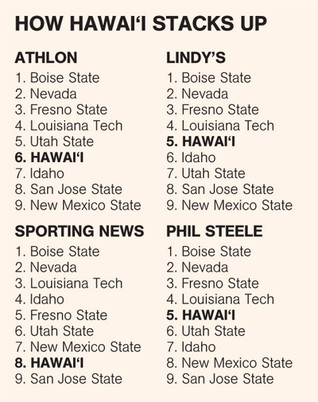 Homophobic teams in bold. (via cmsimg.honoluluadvertiser.com)

For the image averse, those rankings go like this:

Much to my delight, no one really thinks Idaho's run to WAC respectability was for real. Enjoy your 3-10 season, nubs.

What do you think about Kellen Moore falling off the All-America lists? Is there any good reason to not have him on there? Still a fan of Phil Steele? Share your thoughts in the comments.