Share All sharing options for: What's in a (nick) name?

With so much speculation and excitement surrounding Bronco Nation the last few days, we nearly forgot what makes the offseason so fun: arbitrarily assigning new nicknames to Bronco players before a single down is played. After the jump, I'll submit a few for your consideration (with rationale, of course). Have a few of your own? By all means, let's get this party started!

Goofy picture notwithstanding, the Broncos are lucky to have not one but two Moores on the team. "You're killing me Smalls!"

Doug's from Stockton, CA. He recently put on an extra 10 lbs. I watch a lot of ECHL hockey. Voíla!
Admittedly, this serendipitous little coincidence may not be enough to supplant the old standby: Doug "Mad" Martin and that's fine by me. 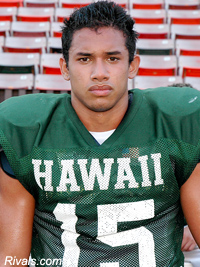 Syracuse legend Ernie Davis was known as "The Express"...well, our newest recruit hits like a freight train and hails from Honolulu. Seems like a good fit to me. Plus, stoners will embrace this one because of the Seth Rogen vehicle. It's a win/win!

Kharyee "the End is Near" Marshall

No, he's not that crazy dude with the sandwich board down on the corner...but this redshirt defensive end is rumored to possess 4.4 speed and should always be near the QB this season. He'll still be playing in 2012...coincidence?

The talented wideout will disavow all knowledge of this one. Ask Coach Choate to explain.

Oh, that Byron could have been Little Mac...instead he was star-punched by Piston Honda LeGarrette Blount on national TV and dropped to the canvas like the venerable Punch Out! warm-up. Luckily for Bronco fans, he's back for his rematch and will keep his headgear on this go 'round.

Who we kid'n? Iloka's 'do makes this moniker fit like a glove.

He's not on a sesame-seed bun, but he is literally straight outta Compton and hits like a Mack truck. Boom. Kismet.

If Makinde is as stingy with wide receivers as his first name suggests, well, gosh...I didn't even have to try on this one.

Winn hails from Vegas and commands many a double-team. This one wrote itself.

Gavins' 'do evokes images of the Predator, but I thought I'd be opening him up for Chris Hansen jokes with that one...so the "Dread Pirate" seemed like a good fit. He's got the dreads, and has the speed to rob many a wideout of his precious loot. Downside: looks nothing like Andre the Giant.

The famously quiet and shy McClellin is certainly silent, but he's also deadly. Much like a ninja...or the plague.

I'll admit...I'm darn proud of this one. Please don't take it from me.

Let's be honest. Mark Johnson is going to be calling him this whether we like it or not. Best just get used to it.

Venable's flying Colburn hit at Fresno was made for slo-mo. Zack Snyder couldn't have choreographed it better.

I think it only fitting that a guy with the last name Leno should show the world who the real king of late night is.

A fine tackler. A fine clothier.