Boise State is taking on the SEC in 2011. The big-name opponent on Boise State's 2011 schedule is going to be the Ole Miss Rebels, and the visit to Oxford, Mississippi, will be played September 3 as the season opener for the two schools.

After the jump, find out how much Boise State will make and what Boise State's non-conference schedule looks like now, and leave your thoughts on how you feel about an Ole Miss matchup.

The Broncos will be heading to Mississippi for the season opener on September 3rd. Would ESPN turn the showdown into a kickoff weekend special, much like it did with BSU-Oregon last season? You bet they would. There's money involved, isn't there?

Ole Miss is forking over $900,000 for the one-off game. For comparison, Boise State is getting $1.25 million for its date with Virginia Tech this Labor Day ... or, as Graham Watson puts it, one dollar and twenty-five cents.

Dan Wetzel makes mention that an ESPN broadcast and no doubt the invisible hand of the Worldwide Leader helped make this game happen:

Boise had offered to play anywhere, no return date to the blue turf. ESPN willing to broadcast. Everyone ducked them until Ole Miss

Andy Staples is happy with the decision.

Here's the deal. If you are Ole Miss or Arizona or Wisconsin or NC State, you should pay up and play Boise State. It's like buying ad time.

Nope. Pretty sure it has never happened before. 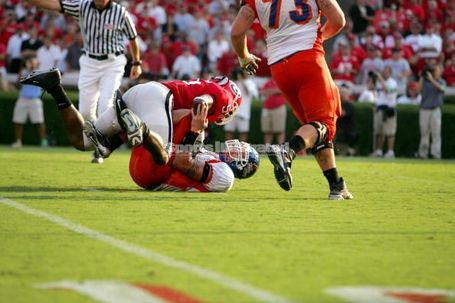 Are you excited to see Ole Miss on the schedule? How do you think the Broncos will match up? Did Gene Bleymaier earn his keep with this one? Share your thoughts in the comments.