After the jump, find out where Lindy's magazine puts the Broncos and how highly they regard Kellen Moore, and learn which preseason magazine is most worth the money and when they all hit bookshelves.

Lindy's Top 25 and All-American teams leaked, my $7.99 lives to see another day

Just yesterday, Lindy's published an article all but coronating Boise State as eventual national champion, and today they let the cat even further out of the bag with the release of pretty much the only part of their magazine I would read anyway. Gator Zone has the details on Lindy's complete Top 25 list as well as its All-America first and second teams.

The complete preseason Top 25 as picked by Lindy's is:

Lindy's list of All-Americans is long and mostly bloated with BCS-conference players. Here's a summary of BSU-related players:

Moore and Reynolds were the only two non-BCS players on the list. The second-team QB was Arkansas' Ryan Mallett, so apparently Jake Locker can eat it. There were zero Virginia Tech Hokies on the All-American teams. The WRs that beat out Austin Pettis were Notre Dame's Michael Floyd, Georgia's A.J. Green, Pitt's Jonathan Baldwin, and Alabama's Julio Jones.

So with Moore picked as the best player at the most recognized position in football, it is a no brainer who is on the cover of the Lindy's West Coast edition. Right? ... Right? 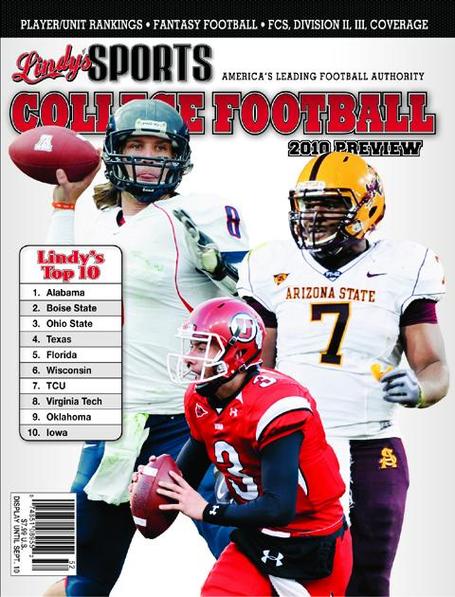 Why hello, three people I need a Google search to name (via www.lindyssports.com)

At least there aren't any California teams on the Great Northwest edition of the magazine. Wait ... what?? 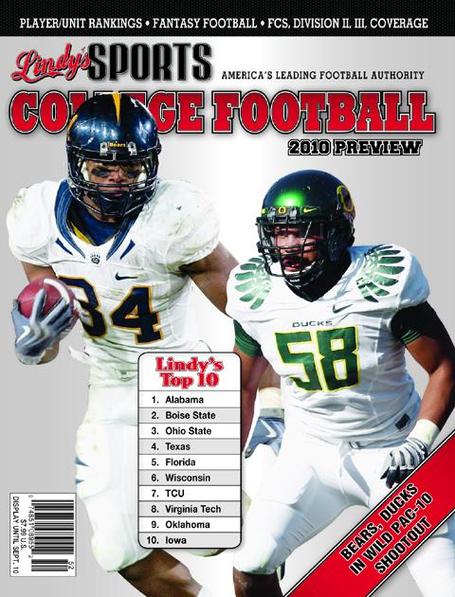 Token Cal running back and the one Oregon player still eligible for 2010. (via www.lindyssports.com)

When to begin stalking your local bookstore

Preview magazines are the first domino to fall in the college football offseason, and before you know it Fall Camp will be here, Virginia Tech commenters will be starting flame wars, and I'll be scouting out the best path around Washington D.C. so as to avoid national monuments of things I find boring and homeless people. Once the first Athlon hits store shelves, the season is closer than you think.

The four main college football preseason magazines are Athlon Sports, Lindy's, Phil Steele, and the Sporting News, and here are there release dates:

This means we're two weeks away from seeing this right beside the Sports Illustrated for Kids with Albert Pujols on the cover. 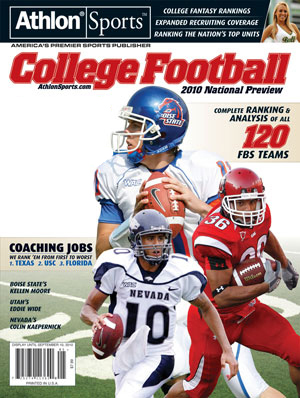 Replace Utah RB with Robb Akey and you have your 2010 WAC media guide. (via www.athlonsports.com)

The college preview magazines most worth your money

If you only have enough money to buy one preseason magazine this season, you better make it count. Stassen.com can help. The preseason magazine aggregator has broken down results from each magazine since 1993, which coincidentally must have been the year that the site was designed. Function over form, I guess. Here are the stassen findings from the last three years.

(Note: Stassen ranks online publications in addition to preview magazines, so that's why the ranking numbers are so large.)

Survey says: Phil Steele. Unless you are still living in 2007, Steele is the most accurate preseason magazine in the business, followed closely by Athlon and not so closely by Sporting News and Lindy's.

I always scoop up a copy of Phil Steele every year because he is as thorough as a colonoscopy. I flip through Athlon in two minutes, standing in front of the magazine rack. Sporting News intrigues me, and I'm not sure if I've ever actually seen a Lindy's magazine in public.

What preseason magazine do you most look forward to? What are your buying habits? Think Kellen Moore will make any other preseason All-American lists? Share your thoughts in the comments.