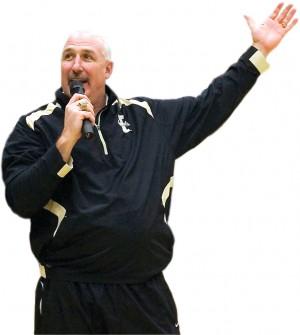 Robb Akey is the renaissance man of the Palouse. Coach, poet laureate, mustache aficionado...the man does it all. Now, he's here to answer your probing questions with his very own Ann Landers-style weekly column. Of course, we shot him some easy, Akey-centric queries right out of the gate, so he could get his bearings—but in the coming weeks, Robb* will answer reader questions and give sage advice like only he can.

Q: Last year was a banner year for the Vandals, as they enjoyed their first winning season in a decade. What can you do to improve on the success of the 2009 team?

A: The only way to get your Trans-Am off cinder blocks is to put it in drive, I always say. We've got some guys up here we're real excited about cuz they know how to play a little football, and we're going to put a little heat on those guys like you would on a insubordinate hunting dog. I know I'm not supposed to say this, but we'd like to win more games than we lose up here. One things for sure, we need to beat those Donkeys this year...a win over the Broncos would also be nice. I think wearing more mock turtle necks in 2010 will also go a long way. Pabst Blue Ribbon!

Q: You open the 2010 season against Nebraska. How do you think your team will fare?

A: Lincoln, Nebraska is Vandal Country...it just happens to be home to the Cornhuskers. Really...just thousands and thousands of Cornhuskers. But, wherever my mustache lands is officially Vandal Country, so, much like the La Quinta Inn in Bellingham—Lincoln Nebraska is Vandal Country. But we think we've got some good guys that are going to go in there and compete, by golly. I know I'm not supposed to say this, but we're going to go to Nebraska and play some Vandal football and see if we can't make some of them guys know that they've played a football game against another football team. Whitesnake.

Q: What has been the most important event in your life?

A: I was at a Skynyrd concert once and they were doing an encore performance of "Freebird" and no foolin' Ronnie Van Zant (God rest his soul) looks right at me in the front row and kinda gives me one of these knowing looks. Well, by golly, later that night on the way home I was in a terrible car wreck that completely totalled my rig. The cops show up and are expecting to pull a corpse out of the wreckage—but when they hauled the car off, there I was, fine as a frog's hair. I'd passed the time by playing travel Boggle and eating the bits of Nilla wafers that were stuck in my mustache. I took one look at the cops and was like, "what took you fellas so long?". Ronnie Van Zant, man—swear to God. 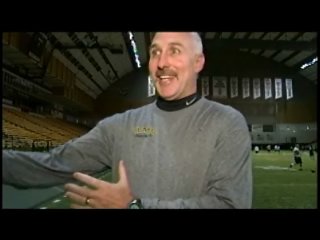 Q: How are the Kibbie Dome improvements coming along?

A: We ain't runnin' no Mickey Mouse organization up here on the Palouse, I can tell you that. I'm not supposed to say stuff like this, but we'd like to have one of the best football stadiums in the United States, if not the entire country. Now, there's an old saying: sticks and stones may break your bones, but people that live in glass houses shouldn't throw them. The Kibbie Dome used to be a glass house, but now it's mostly aluminum and we have our boosters to thank for that.

Q: How did Spring ball go?

A: In between shuttling Shiloh Keo to the Chuck-a-rama, we had a great Spring camp. We had some guys carrying logs up the stadium steps like that Indian guy on Vision Quest, honest to God. Nathan Enderle looked very tall at times, but also made some Mickey Mouse throws, but we're going to move on and we're going to be alright. I know I'm not supposed to say stuff like this, but I think our team can play against anyone in the country for at least one quarter. If we can beat Bowling Green by one point, I strongly believe that we could beat any MAC team by one point, if not less. 'Course we had a little rust this Spring too, but like my daddy used to say, "you just gotta bang that rust off with a claw hammer and get back to the Piggly Wiggly".

Q: Are you or your coaches going to be doing any professional development this Summer?

A: We had planned on taking the gang down to Reseda to learn some tips from that John Kreese guy that owns that Cobra Kai dojo. We'd heard some good things about some of his philosophies regarding the enemy and whether or not they deserve mercy. Turns out, he's just some actor from Karate Kid and the dojo has long since been torn down (Mickey Mouse nonsense). Anyway, we didn't know what to do after that so we just went and watched the Blindside a bunch of times and came back with some really good game plans. First one...recruit that kid from the movie, Michael Blindside, I think is his name.

If you'd like to ask Robb Akey* a question about football, life, or mustache grooming, send it HERE.

*May or may not be the real Robb Akey, there really is no way of knowing.