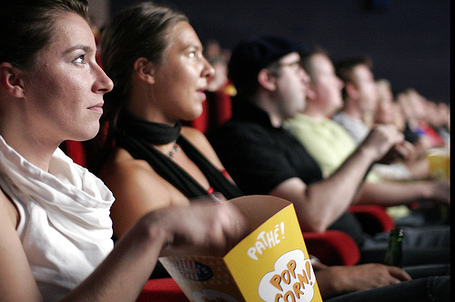 The 2009 season is well in our rearview mirrors, and Spring ball has sprung across the WAC. Will 2010 bring new fortunes to our conference brethren or more of that sweet, sweet mediocrity? I'm certainly not ready to start making predictions...but what I am ready to do is provide a list of films whose titles suggest their current situations. This list is Leonard Maltin approved.

Idaho got to experience once-in-a-decade success in 2009, going 8-5 and actually playing a game in late December. If history is any indicator, the Vandals will be popping the corks again in 2020. Don't remind their delirious fanbase that they gave up nearly 300 points in their last 6 games of the season.

Louisiana Tech was one bright spot for the WAC in 2008 and coach Derek Dooley appeared to have started something very good in Ruston. A year later, the 4-8 'dogs would be sans coach and wondering why no team can sustain success in the conference ('cept one, natch). The Sonny Dykes era will certainly be...interesting.

In 2009, Fresno State gave two top ten teams all they could handle...for a while. Ultimately, it was another lackluster year for Pat Hill and Co., though the expectations are starting to get so low there's nowhere to go but up. If the Bulldogs can find a running back to after a slew of departures and a reliable QB to distribute the football, they will continue to have the honor of being the 2nd or 3rd best team in the conference.

120th. That's what New Mexico State ranked in total offense in 2009. It is worth mentioning that there are only 120 teams playing in the FBS. Their three wins on the year? By a total of 9 points. Somehow, the absence of Hal Mumme made it seem like a winning season.

The 4-8 Aggies still aren't world beaters...but they're sure getting closer to competing week in and week out. With a downhill runner in Robert Turbin, and a legitimate dual-threat QB in Diondre Borel, the Aggies of Logan might just crack the .500 mark or better in 2010—something they haven't done since 1996.

Dick Tomey looked comatose for a good portion of his last year with the Spartans, and the team responded in kind, posting just two wins in 2009. How bad were things for the Spartans last year? They were ranked 115th (out of 120) in total offense with 3,408 yards on the year. Kellen Moore passed for 3,536 yards last year. Ouch.

Coach Greg McMackin's teensy little gaffe at WAC media days had the Warriors feeling blue before the 2009 season had even begun. Let's call that 51-10 beating by Wisconsin in a game that would have sent them bowling a little salt in the wound.

Let's face it...the face of the Nevada program isn't the "innovative" octogenarian anymore. No, right now the hopes and dreams of the Wolf Pack faithful are carried on the stick-like appendages that Colin Kaepernick calls legs. With a worse defense last season than the teams that allowed Air Bud to become all-conference, Nevada's hoping to turn things around for CK's senior year as it represents their last best chance to end the Broncos' reign. Good luck with that.

Boise State—"In the Line of Fire"

The target on the Broncos backs can now be seen from the International Space Station. Every team in the country, not just those in the WAC, want to be the ones to end the Broncos run. Chris Petersen will need to do the best coaching of his career in 2010 to keep the team focused as they spend the offseason amid a sea of hype.

Should I have had the Vandal's movie be "the Devil's Own"? Give us your suggestions below.