The Virginia Tech - Boise State ticket situation: How to buy, where to buy, and what to buy

Share All sharing options for: The Virginia Tech - Boise State ticket situation: How to buy, where to buy, and what to buy

We're only five months away from Boise State's season opener against Virginia Tech. While you may be occupying your time with the NCAA basketball tournament or the NFL draft, it's not too early to start planning ahead for the biggest game on the Broncos' 2010 schedule.

Are you planning on going to the game in D.C.? Do you need tickets? Do you have access to tickets but aren't going to be able to attend? Join me after the jump as I detail the current state of Virginia Tech tickets and find out how you can score seats to the big game.

Boise State will play its season opener against Virginia Tech at FedEx field in Washington, DC. Daniel Snyder is pleased. 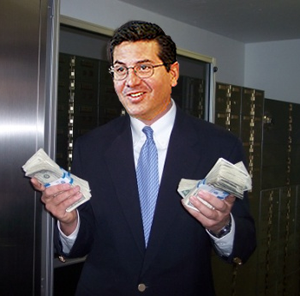 FedEx field has a capacity of 91,704. It also has this handy stadium diagram with pictures from each section so you have an idea of what view you will have. 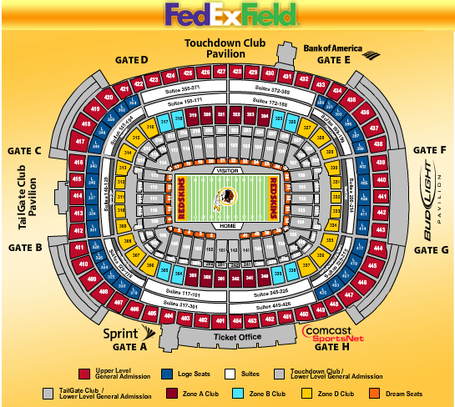 TicketMaster is currently doing a presale for American Express card holders. They have 4 different price levels but not much control on where the tickets are located. Currently these are the prices and locations for each as of right now. Additional taxes and "convenience" charges not included. Also, you'll have to have an American Express card to purchase them.

I spoke to a TicketMaster rep on the phone to see if I could get a little bit better control over the location of the seats. I was told that they do not have access to where the presale allotment of tickets are located and that they had to be purchased through the website.
This is a little bit of a bummer. If I'm going to spend $175 plus additional charges on a ticket, I don't want to be stuck in a corner.

As of right now, Stubhub currently has 1,391 tickets available for this game. They range pretty far in prices but they all seem to be more than what is available on TicketMaster. For the above sections, here are comparative prices on tickets.

While more expensive, StubHub does offer more selection on where your seats will be. They also have some guarantees around the tickets you buy so you don't have to worry as much about being turned away at the gate for having a fake ticket.

A quick search on eBay turned up 27 listings. None seemed to be bargains. Buy at your own risk here.

Tickets for the game are currently on sale through the Bronco ticket office to season ticket holders only. If you are a season ticket holder, you should have received a renewal packet in the mail. Inside, this has information on how to purchase Virginia Tech tickets.

You will go to IdahoTickets.com and login using your account number or email address. Once logged in, you will be taken to a page detailing how to renew your tickets and also a link to purchase away tickets for the 2010 football season. Follow this link and you will be directed to the away game ticket sales page. You will have to enter your account number to continue.

Here you will have the option to purchase the following games:

The Virginia Tech game has two price points -- $94.00 and $56.00. On the website, there is no indication as to where these seats are. I called up the Bronco ticket office, and the girl I spoke to on the phone informed me that the ticket allotment they have is for sections 117-126 and 420-435.
One thing that was noted Friday by J.T. Ray, specific seats are not assigned at time of purchase but rather will be determined later based on membership/donor level with the Bronco Athletic Association.
If you are not a season ticket holder, tickets will go on sale to the general public sometime around June 1st.

I was able to use our account number and login to the website as described and purchase 2 of the $94.00 tickets. I was also charged a $5.00 season athletic fee for a grand total of $193.00. No other taxes or charges.

The ticket prices are on par with the Ticketmaster prices plus you don't have to deal with the extra charges and you are guaranteed to be in a Boise State section so this definitely seems like the best deal.

Who needs tickets? Who has access to tickets and can't go?

Washington, D.C. is a long ways from Boise. There will be a large amount of season ticket holders who won't be able to make the trip. Conversely, a game on the east coast gives those of us Bronco fans who aren't in Boise a chance to support our team.

If you fall into either of these two categories, drop us an email at tips@obnug.com. We are going to keep a record of those who have tickets and those who need tickets. We will then match you up and email you both so that you can work out the details.

Hope to see many of you in D.C. Go Broncos.