Every hero needs a villain, and there are plenty of Bronco nemeses to choose from in this year's Public Enemy No. 1. From media blowhards to WAC rivals, the nominee list has it all. And readers get to decide who gets the final spot on the ballot.

After the jump, see who's nominated, and weigh in with who you think should be added. Candidates will be skewered all next week, and we'll have a new arch enemy sooner than you'll know. Which Bronco villain do you despise the most? Let's talk about it.

Each year, Public Enemy No. 1 crowns Bronco Nation's most hated individual and then gives him or her the business for the next 12 months. Each nominee gets its day in the sun next week. Final votes are tallied after that.

This is the third installment of Boise State's Public Enemy No. 1 series, and it could be argued that we have yet to get one right.

The inaugural Public Enemy was Colorado coach and Benedict Arnold stand-in Dan Hawkins. He spent his year as Public Enemy quietly destroying the Colorado football program in a meek display of serious inadequacy. It would have been funny if it wasn't so depressing.

Last year's Public Enemy seemed like a sure thing. ESPN blogger and noted fact hater Graham Watson won the award going away thanks to her repeated slights against the Broncos and Merriam-Webster in 2008. She then proceeded to act mostly competent for the majority of 2009. I blame ghostwriting.

Will this year's Public Enemy champion have a similar turnaround? 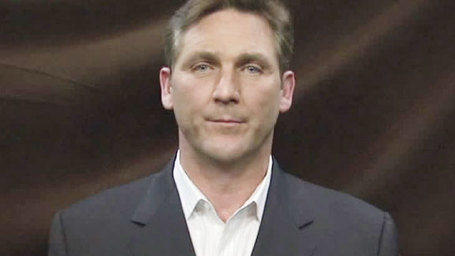 Casting condescending votes for the Broncos made Jamesa regular punchline on OBNUG all last season, but it was James who laughed last when he put BSU seventh in his final rankings. Revenge is sweet, Craig James. But he probably knows that considering he got Mike Leach fired and all. 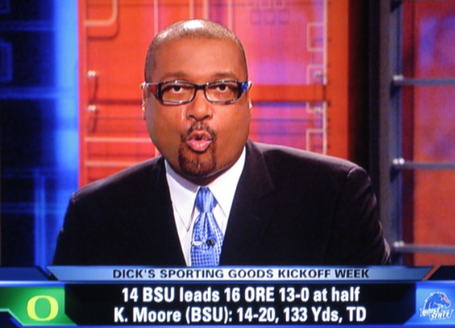 Mark May hates non-BCS teams like skinny jeans hate Mark May. As a regular on ESPN's college football programming/shouting, May uses the broadcasts as his platform to question Boise State's credentials, doubt the Broncos' success, and expedite Lou Holtz to an early grave. Does May have an unbiased bone in his body? 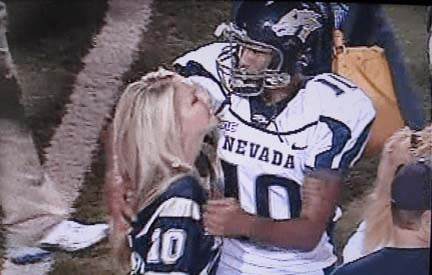 Former WAC offensive player of the year and current stick bug Colin Kaepernick will forever be one of Bronco Nation's most hated rivals. He ran circles around BSU in 2007, pulled the greatest illusion of all time in beating Kellen Moore for 2008's WAC OPOY, and collected heaps of praise for his mature quarterback play up to, but not including, the 2009 Boise State game. To make matters worse, people like him a lot. What is wrong with people? 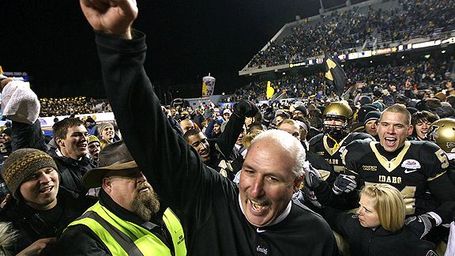 "The McFish is back!" (via a.espncdn.com)

Akey made a deal with the devil to get the Idaho Vandals a Human Bowl victory in 2009, which was convenient for the devil considering he leases out the KibbieDome in the offseason. Akey's newfound celebrity is cute, but it borders on sacrilege when the mustached one gets mentioned in the same sentence as Coach Pete. For being out of his league and loving every minute of it, Akey earns the right to be hated. Of course, simply being a Vandal does the trick, too.

Boise State's Public Enemy No. 1 will feature five nominees this season, and the fifth one will be decided by the readers. Which cretin have I left out? Who deserves consideration for a year of Bronco scorn? See below for some options, and share any write-in candidates in the comments.

The one with the most votes will be the fifth and final Public Enemy candidate, so let your voice be heard. Who is it going to be?