Reaction: Kyle Wilson to the New York Jets, penciled in as nickel and punt returner

Share All sharing options for: Reaction: Kyle Wilson to the New York Jets, penciled in as nickel and punt returner

The wait was longer than expected in Thursday's first round of the NFL Draft, but the final outcome could not have worked out better for Wilson. Drafted No. 29 overall by the New York Jets, Wilson gets to play for one of the NFL's best defensive coaches, line up opposite one of its best DBs, and play home games in his home state.

After the jump, view video of Wilson's pick by the Jets, find out how the New York media is reacting, and cringe in disbelief at the reason why Wilson slipped on Thursday.

Jon Gruden: "He's got the long hair. He plays with a Troy Polamalu-like temperament."

Steve Young: "This is scary in my mind" (speaking either about Wilson, Derrelle Revis, and Antonio Cromartie grouped together or about Chris Berman's hairpiece).

I watched the NFL Draft on NFL Network because I value my sanity, and the NFLN's cameraman caught a New York Jets fan booing immediately after the pick was read. It's understandable. Jets fans have a pavlovian draft reponse to booing.

Reaction in the New York media

Wilson made the back page of the New York Post, although the Wilson family may want to skip out on framing the whole newspaper. 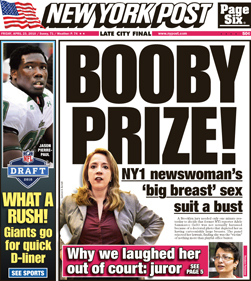 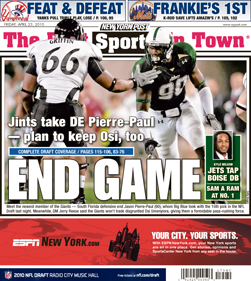 Front and back pages of the NY Post. (via www.nypost.com)

The New York Post's story quoted Jets coach Rex Ryan getting very much ahead of himself with his opening day depth chart.

"When we draft a guy in the first round," Ryan said, "he's going to play. He'll be a starting nickel and our punt returner."

And last night they added Boise State's Kyle Wilson, who, like his new coach, is known to have quite a bit of swagger.

That's all that Gary Myers' column says about Wilson and it's the only explanation for the "bad boy" label in the headline. The rest of the story is about Braylon Edwards (diva WR), Santonio Holmes (pot suspension), and Antonio Cromartie (Shawn Kemp-like paternity). Gary Myers, your argument is invalid.

The Daily News redeemed itself later with a feature on Wilson, detailing the perfect connection between cornerback collector Rex Ryan and local boy Wilson. The story even mentions the serendipitous nature of the pick: Wilson was the best player left on the Jets board and he was on the phone with the Vikings (pick No. 30) just a few minutes before NY called.

And speaking of poll posts, OBNUG readers are geniuses. In the Kyle Wilson draft preview yesterday, the winning vote in the prediction poll was Other. Nailed it.

Why did Kyle Wilson slip to pick No. 29?

Scuttlebutt around the draft was that the Cleveland Browns favored Wilson over Florida's Joe Haden as the draft's best cornerback. And at pick No. 7, cornerback seemed like just the position the Browns were going to pick. So naturally, they chose Haden.

The reason why? Well, let's just say Karl Benson's not going to like hearing this.

Prior to the pick, ESPN reported that the Browns were debating between Haden and Boise State cornerback Kyle Wilson. Reportedly, the deciding factor was the fact that Haden played in the SEC.

Even though Rex Ryan anointed Wilson as the team's starting nickelback, it's worth a look anyway to see what kind of CB talent NYJ has on the roster.

You may remember Lowery from his days at San Jose State. And you may recognize Drew Coleman from his ill-fated AFC championship game against the Colts. Wilson as the nickel is starting to make a lot of sense.

Are you happy with where Kyle Wilson went in the draft? What did you think about Cleveland's reasoning for taking Haden? Expecting big things from KW this season? Share your thoughts in the comments.