How high will Wilson go? What teams are interested in the Bronco CB? Where will Wilson be watching? For answers to these and more, join me after the jump, and feel free to share your draft predictions in the comments and in the poll. 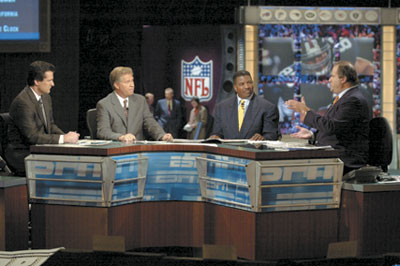 Will Wilson be in New York?

Close. He'll be at home in New Jersey, watching the draft with family, friends, and an ESPN camera person with little regard for personal space. No word yet on if Jared Zabransky loaned Wilson a rugby shirt to wear.

On a related note, be sure to check out the Twitter feed of Kyle's brother Gerry all day today for some good updates on what's going on in the Wilson camp.

Yahoo Sports writer Charles Robinson rendered my $7.99 ESPN Draft Guide useless with a column on Wednesday about Wilson's high regard in many NFL war rooms. Per Robinson, Wilson is many team's No. 1 cornerback prospect.

Boise State cornerback Kyle Wilson will be the first cornerback drafted. All the public talk has been about Florida’s Joe Haden, but Wilson has the major personnel buzz. Teams love his speed and athleticism, and believe the few kinks in his game can be ironed out with coaching.

And unlike Haden, personnel departments think Wilson hasn’t touched his full potential. He had a very good Senior Bowl and raised some eyebrows. And in the interviewing process, he comes off as confident, if not a little feisty. Don’t be shocked if he’s plucked inside the top 10.

As usual, my man is spot on. Cld go No. 7 RT @YahooSportsNFL: Don't be shocked if Boise State's Kyle Wilson is the 1st cornerback drafted.

It is hard to tell what to believe around draft time, but with late word leaking like this from experts like Robinson and Smith, you have to believe that chances are pretty much even that Wilson goes before Florida's Joe Haden. It will all depend on which team is picking and how that particular team sees the draft board.

Wouldn't every team be interested in a potential lockdown corner with a great work ethic and personality? You'd be surprised. Here is tonight's NFL Draft order and a bit of information on the interested teams.

Collecting various mock drafts about Wilson is apparently not as novel a concept as I thought it would be. The IPT's Dave Southorn beat me to the punch by posting a list of notable mock drafts. Below are some that Southorn chose as well as some new ones that I picked up on. 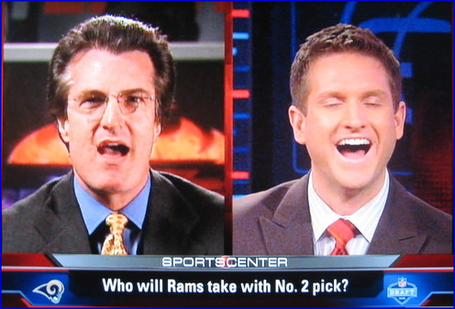 No. 24 Philadelphia. Southorn listed Kiper as picking Wilson to go to Houston, but in Kiper's latest mock (posted yesterday), the helmet-haired-one has him slipping to Philly. Taking Wilson's place in Houston? Fresno's Ryan Mathews. I will now light myself on fire.

And then there's this:

If tape alone told the story, (Haden) still would be, by leaps and bounds, the best corner in the draft this year.

What about tape of the Fiesta Bowl?

No. 30 Minnesota. If you want to impress your friends at your draft party tonight, try this little factoid on them: Todd McShay has no idea what he's talking about. That's the rumor going around anyway. McShay is the Trev Alberts of the NFL draft.

Southorn originally had this pick listed as No. 24 to Philly.

Texans steal Wilson, a physical force with good closing speed, this low in the round.

No. 20 Houston Texans. Kirwan mentions that Wilson "is a very confident guy who claims he's the best corner in the draft." Is it confidence if it's a fact?

No. 16 Tennessee Titans. Gosselin is one of the most highly respected NFL writers on the planet, so what he says is gold. He sees D-line depth being too thin at this point for Tennessee to go anywhere other than CB. He has Haden off the board at No. 13.

No. 19 Atlanta. The NFP sees a CB need for Atlanta, and with Haden off the board, Wilson is the obvious next choice.

No. 27 Dallas Cowboys. Scouts is convinced that Wilson is Top 20 talent but sees him falling all the way to No. 27. Even worse, they have Alabama CB Kareem Jackson going to Houston at No. 20 ahead of Wilson.

No. 19 Atlanta Falcons. PFT's mock draft was completed in late March, which was like seven years ago in draft years.

No. 13 San Francisco. Simmons has Wilson over Haden, which is only notable probably because someone told Simmons this was the case. Adam Schefter he is not.

And for comedy relief, I present ...

No. 20 Houston Texans. If Bleacher Report says it's true, then it is either a) completely not true at all or b) plagiarism.

If Clevelend does not take Wilson at No. 7 (or trade down a couple spots for him), it appears that Wilson will be Houston's to have at No. 20. The teams standing in Houston's way are Tennessee and Atlanta, but what with this being the NFL Draft and all, anything is possible.

I thought it would be fun to do a quick overview of some varying draft strategies that I have heard tossed around lately. Feel free to share your favorite strategy in the comments.

Draft for need. This strategy is employed by a lot of teams because it is safe and justifiable. Why take a player at a position where you are already stacked?

Draft the best available player. This strategy was perhaps best epitomized by the Vikings' draft classes of yore that contained Randy Moss (when Cris Carter was already on the team) and Adrian Peterson (when Chester Taylor was doing just fine thanks). Talented players who fall in the draft make interesting decisions for many NFL teams. The ones who draft for best available tend to pounce on these opportunities and let the position battles sort themselves out.

Draft a blue chip player whenever possible. Bill Simmons' new favorite NFL meme is blue chip players. Every team has to have a handful, so if you can get one in the NFL Draft, you absolutely have to take that chance. For instance, should a team make a safe pick of an offensive linemen over a potential blue chipper like S Eric Berry?

Draft the player with the most marginal value. I heard this strategy explained on Simmons' latest podcast with Football Outsiders' Aaron Shatz. Basically, it comes down to this: You would draft Sam Bradford high because the talent of Sam Bradford has a greater margin than that of the No. 5 QB in the draft. You would not draft Eric Berry high because Berry's talent is not a giant margin greater than that of the No. 5 safety. This explains why certain positions (which may have a marginal value over other positions) tend to always go higher.

Where do you think Wilson will fall in tonight's first round? Any team you don't want to see him end up with? Think he'll go before Florida's Joe Haden? Share your thoughts in the comments, and vote in the poll.