Catching up with Nevada: Is this the year the Wolf Pack defense is good?

Share All sharing options for: Catching up with Nevada: Is this the year the Wolf Pack defense is good?

After the jump, find out what is new for UNR's D this spring and how it might impact the Wolf Pack's 2010. Worried about Nevada? Disgusted by Colin Kaepernick? Share your thoughts in the comments. 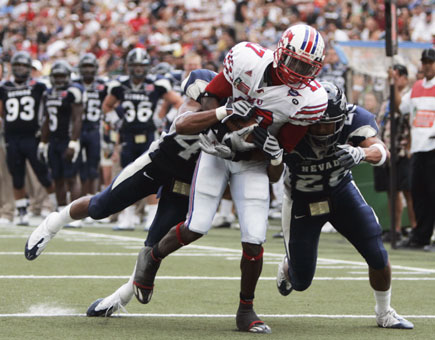 "Don't mind me, guys. I'm just headed back to the end zone." (via i.usatoday.net)

Ah, Nevada. The San Diego Chargers of the WAC. The Pack again turned in a solid season against bad teams, but an eight-game winning streak flamed out in losses to Boise State and SMU - the latter loss coming in a 45-10 Hawaii Bowl disaster that was seven types of ugly. Nevada may be the only school to have its season-in-review DVD end on November 21.

The Pack suffered only minimal losses on offense with the departures of a starting center and a sixth-year senior running back with hypnosis addiction. No more Luke Lippincott means more carries for Mike Ball and possibly Lampford Mark, depending on how Vai Taua's off-field issues sort themselves out (Taua was suspended for the Hawaii Bowl).

Defensively, Nevada will struggle to replace five starters from last year's team, including both safeties, a middle linebacker, and one-half of the Wolf Pack's dominant defensive end duo. DE Kevin Basped jumped ship early to join the NFL Draft, apparently forgetting that he is the worse of Nevada's two defensive ends.

Colin Kaepernick is back and as skinny as ever. WAC Defensive POY Dontay Moch returns to pad his stats against SJSU and NMSU. Chris Ault is still kicking around.

By and large, these are your same old Wolf Packers that roll through the cupcakes on their schedule and lay eggs against Boise State and TBD bowl opponents. The offense will again be fantasy gold with what is rumored to be an improved passing game, featuring WAC Freshman of the Year Brandon Wimberly at WR. The defense will still be suspect as it searches for replacements for key players. And special teams? I'm not sure Nevada is familiar.

The Kaepernicker has shown steady improvement through his first three years of "quarterbacking," going from 53 percent to 54 percent to 58 percent from his freshman to junior years. If this keeps up, he'll catch Kellen Moore by the year 2018. Karl Benson will find a way.

One focus of spring ball is getting Kaepernick more comfortable doing quarterback things, presumably so he will have a tougher time abandoning them once real games begin. In the team's first two scrimmages, Kaepernick has five total TD tosses and zero interceptions. In related news, Graham Watson is on the rebound from Dan LeFevour. I think I see where this is headed.

The question: Will the Nevada defense be better in 2010?

When it comes to defense, Nevada would prefer that it doesn't come to defense. Home to last year's 119th-ranked pass defense, UNR at least recognizes its need to improve that side of the ball if they ever hope to be consistently competitive against good teams. Former DC Nigel Burton is gone, having parlayed his defensive coordinator experience at Nevada into a head coaching job at Portland State. Haha! Just kidding. April fool's. 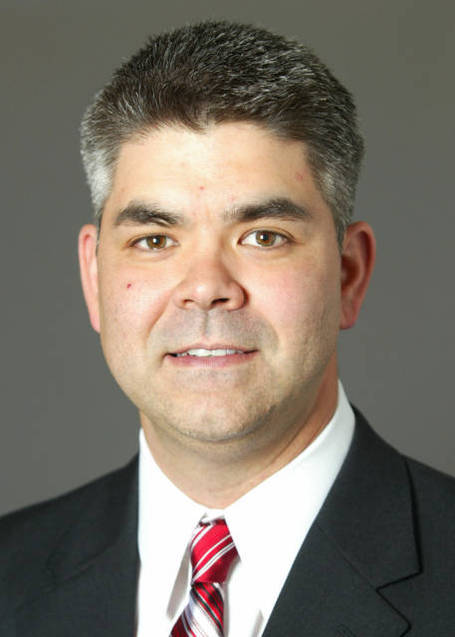 New Nevada DC Andy Buh - still with helmet hair after all these years. (via image.cdnl3.xosnetwork.com)

Burton's replacement is good-old-boy former player Andy Buh who worships the ground Chris Ault walks on and refuses to place blame on the defense for the team's struggles.

I care very dearly about this program and Coach [Chris] Ault and how it’s perceived out in the public ...

Note to Andy Buh: Nevada does win games because it has a good offense.

Buh's plan for defensive improvement: pointing players in the right direction. You mean, like, towards the ball?

We’re going to see if we can point them in the right direction and see if our plan is going to work.

It is not all bad news for the Wolf Pack. A new coach could be just what the doctor ordered for the defense. The law of averages would make you think that Nevada is due to have an average defensive season sooner or later. Perhaps most importantly, Nevada has been short on defensive turnovers lately, and those numbers tend to regress to the mean from year-to-year. The laws of thermodynamics might be the best thing to happen to Nevada's D this season.

Is 2010 going to be the year that the Wolf Pack defense makes strides? Or is the Nevada D doomed to wander incompetently through the WAC with one of the worst units in all of college football yet again?

Share your thoughts in the comments and in the poll. 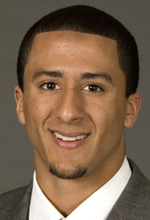 This one's easy. He is the anti-Kellen. You must hate him.

Our young apprentice blog Pistol Whipping the WAC has been quiet since December, but I'm going to assume it is just a sabbatical and not a full-on retirement. Bloggers are allowed one sabbatical every five years. It's a law. The Reno Gazette-Journal has been bravely reporting on spring scrimmages, and the UNR student newspaper has semi-often updates.

Is this the year the Wolf Pack defense changes for the better? Does Nevada have any greater chance against the Broncos in 2010 than they have in previous years? Share your thoughts in the comments.