Catching up with Fresno State: Has the window closed on the Bulldogs?

Share All sharing options for: Catching up with Fresno State: Has the window closed on the Bulldogs?

Fresno State will not be on anyone's preseason Top 25 lists this summer and thank goodness for that. But are the Bulldogs still a team to be reckoned with in the WAC? Have they been officially replaced by Nevada?

After the jump, find out how Fresno is looking this spring and discuss how the Bulldogs are perceived now that they have been off the radar for a few seasons. Has Fresno's window closed? Let's discuss. 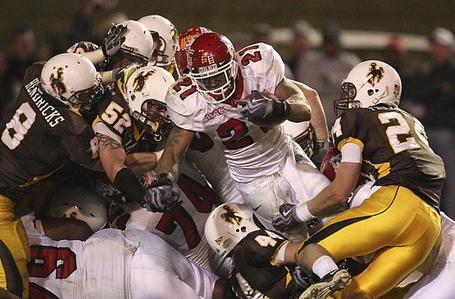 Instead of closing the season with eight wins in nine games and good vibes all around, Fresno State lost to Wyoming in the New Mexico Bowl in double overtime thanks to a goalline failure and a general lack of caring. Afterwards, star RB Ryan Mathews declared for the NFL draft and Pat Hill agreed to a contract extension to stay in Fresno. Wait! You got it backwards, people!

All-American RB Ryan Mathews declared early for the NFL, which wouldn't be all that bad except main backup Lonyae Miller graduated as did main MIller backup Anthony Harding. Robbie Rouse is your new starting running back at Fresno State, all 5'7", 185 pounds of him. Anyone remember Dave Meggett? You will when you watch FSU games this year.

The Bulldogs are expected to get an influx of talent at the skill positions thanks to a good haul in recruiting. Some of the incoming WR speed should help offset the loss of WR Seyi Ajirotutu, but was Pat Hill not in the room when opponents were running circles around his defense? Guess not.

Starting QB Ryan Colburn is back, much to the chagrin of Fresno fans. Whether it's living up to the expectations of Tom Brandstater or keeping the seat warm for redshirt freshman Derek Carr, Colburn just can't win. (Note: It's probably not the Brandstater one.) If Carr has a good spring and fall, he could be starting over Colburn in 2010.

The Bulldogs return a slew of starters on both sides of the ball, including a whopping nine on defense. Headlining the defensive group is LB Ben Jacobs who nearly won himself a WAC DPOY award last year by virtue of talent relativity - he was good, everyone else not so much. K Kevin Goessling is likely to be on some Lou Groza-type lists this fall.

Will the Fresno running game be okay?

Pat Hill must have stumbled upon Any Given Sunday during a free Starz weekend because the Fresno head coach is now all about opening up the offense. Enter Derek Carr (eventually). Recruit wideout people (Davon Dunn, e.g.). Give Hal Mumme a call to see what's up and hope he cuts you a deal on Hal Mumme's Air-Raid Offense 3-pack. 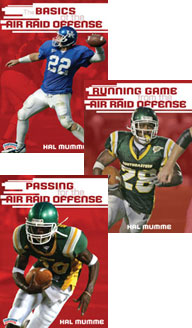 Foreword by Rich Kotite. (via www.championshipproductions.com)

But before the Bulldogs complete their transition into Cliff Kingsbury's Texas Tech, they are going to have to spend some time leaning on a ground game that is suddenly very thin.

Robbie Rouse is certainly a departure from the downhill styles of Mathews, Miller, and Harding, and unless backup Michael Harris wows some folks this spring, it could be the Rouse show come September. That will significantly change the style of Fresno's running attack in a much more Jeremy Avery-like way.

The question: Has the window closed on the Bulldogs?

For the second year in a row, no one is expecting Fresno State to win the WAC or finish second in the WAC or do much more than avoid tripping over itself. Where is the overblown hype? Where are the Graham Watson sonnets? What is up with the lack of Ryan Colburn in my Google Alerts?

Fresno State is not the same Fresno State as they were before. How far have they fallen? You tell me.

Are they also-ran material?

Fresno is no longer seriously considered as a WAC favorite and will be closer to Idaho and LaTech in the preview mags than they will be to Boise State and Nevada. Not helping distinguish themselves any, the Bulldogs beat Utah State by four and LaTech by two last season.

For the past couple seasons it has been Boise State, Nevada, and Fresno State in that order and with plenty of separation between each. The Bulldogs have consistently lost to the Wolf Pack and the Broncos, but at the same time they have consistently beaten pretty much everyone else in the conference. You will never mistake them for BSU, but you would also never mistake them for NMSU.

Are they secretly just as good as Nevada and still Boise State's main competition in the WAC?

You may start disliking these people 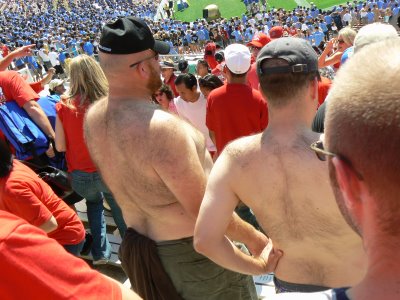 Long recognized as some of the seediest in the WAC, Fresno fans can now add a new feather to their trucker cap: whining. After last year's loss to the Broncos, a small furor erupted over the legality of Winston Venable's flying QB hit on Ryan Colburn. "Where was the flag?" Fresno fans wondered. "Scoreboard," I responded, as if they were actually talking directly to me.

The Fresno Bee is your best bet for Bulldog info and Pat Hill conspiracy theories courtesy of Matt James, the king of Fresno coverage. OBNUG's friends at Bulldog Bounce are in offseason slumber, but you can expect them to be back in some form around August.

How far has Fresno State fallen? Do you still consider them as one of the best teams in the WAC? Think Pat Hill is the problem? Share your thoughts in the comments.