With Boise State's spring game only four days away, time to check out of work and start making plans for your weekend. Here are some spring game details:

After the jump, find out more about Boise State's spring game, including the format that has been chosen and the Fan Fest festivities taking place before and during the game. Will you be headed down on Saturday?

I spoke with a ticket office person yesterday who informed me of the following:

There will be no player draft for this year's spring game due to the inordinate amount of injuries and Trevor Harman's paralyzing fear of getting picked last. Too bad. Last year's player draft was a kick in the pants and made the spring game loads more fun.

With too many players dinged up, there weren't quite enough available bodies to hold a draft like last year. It'll be the offense against the defense, with the players sporting their game uniforms.

Offense vs. defense means that the Broncos may need to dust off the old scoring system they have used in years past to help decide the spring game's winner and loser. I dug through the archives to find this scoring system from the 2007 spring game:

The official scoring system for 2010 has yet to be announced, nor has an official description of what in the world "sudden change" means.

Beginning at noon on Saturday, Boise State will hold a Fan Fest in the grass field beyond the North End Zone. Per BroncoSports.com, here is a taste of what's involved:

Come and enjoy music, video highlights, kids games, skills events, player autograph stations, pictures with the Fiesta Bowl trophy, a food court and much more ... From 1:00 pm - 2:00 pm, kids 12 and under are encouraged to enjoy and hour for a Youth Experience on The Blue. Bronco players and coaches will be on the field in stations interacting with kids and showing off some of the drills that actual Bronco players participate in to get ready for games.

What I wouldn't give to be a 12-year-old boy again.

The crown jewel of the Fan Fest event is a spring game halftime competition where one lucky fan will have the chance to win $104,000 by showing off a TBA series of football skills. You have until tonight to register at a local Chicago Connection, or you can drop by the Wow 104.3 booth at the spring game to sign up.

At any rate, it is probably best to get your center-QB exchanges down. You never know what they might ask you to do.

Watch the spring game with your OBNUG friends

Wild horses could not keep me away from the last actual Boise State football experience until August. I will be there, taking notes for the out-of-towners, taking notes for those who rely on the Idaho Statesman for their scrimmage coverage, and giggling with glee every time Raphiel Lambert touches the ball. 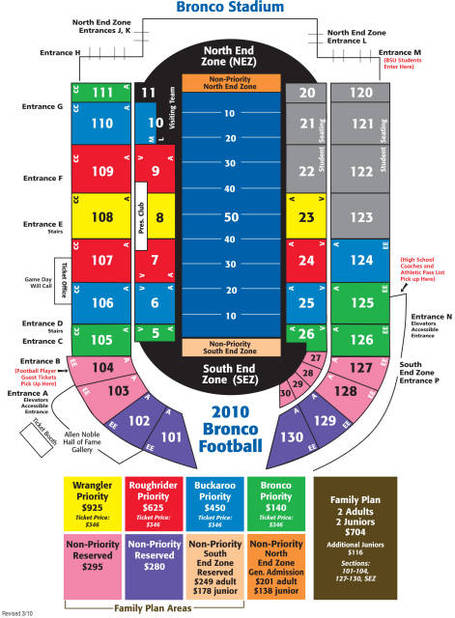 Attendance to rival the UC Davis game. (via image.cdnl3.xosnetwork.com)

I'll be the one with the Nancy Drew reporter's notebook and the bright yellow North Face backpack that I bought solely for the purpose of not getting lost at Disneyland. You can't miss me.

Planning on attending Saturday's spring game? Bummed that there won't be a player draft? Pretty sure Kellen Moore would have gone No. 1 overall anyway? Share your thoughts in the comments.