Catching up with Idaho: Will the Vandals keep winning in 2010?

Share All sharing options for: Catching up with Idaho: Will the Vandals keep winning in 2010?

Last year's Idaho Vandals team was historically okay, even going so far as to win a bowl game. Was Vandal success an aberration? Or did it signal a turnaround for the Idaho program?

Share your thoughts after the jump, and see what the Vandals have been up to this spring and how they plan on replacing OG Mike Iupati. What are your thoughts on the 2010 Vandals? Think Robb Akey is a tool? Let's discuss.

All this week, OBNUG will be checking in with Boise State's 2010 opponents to see how their spring is going. Now: Idaho. Next: Hawaii and Utah State. Previously: Virginia Tech. Wyoming. Oregon State. Toledo. Louisiana Tech. San Jose State and New Mexico State. 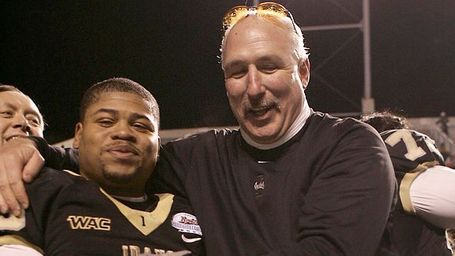 The Vandals capped off a surprising 8-5 season with a Human Bowl win on a last-second two-point conversion that local media and fans erroneously and sacrilegiously compared to Boise State's 2007 Fiesta Bowl heroics.

The 2007 Fiesta Bowl: Brilliantly scripted plays run to perfection, an undefeated season on the line, a BCS bowl, 60,000-plus in attendance and a national network audience.

The 2009 Humanitarian Bowl: A fluky catch to get in the red zone, a pretty bad throw for a TD, bad clock management (not shown), absolutely zero stakes, 30,000 or so in attendance plus a curious and confused ESPN2 audience, the distinct smell of Moscow.

How the Vandals did against the Broncos last year

In what was billed as the renewal of a storied rivalry, the Broncos used a Titus Young kickoff return and a Brian Reader turnover fest to cruise to a 63-25 win in a game that was often not even that close.

The Vandals are without all-world, world-sized OG Mike Iupati as well as three other starting offensive linemen from last season. Starting with four fresh faces on the line will be tough enough. Replacing leading rusher DeMaundray Woolridge and leading Ed McCaffrey look-a-like Max Komar will be even tougher. But the toughest of all? Playing your home games in a giant tupperware.

The biggest change for the Vandals will be that teams will give the requisite 110 percent against them this year as opposed to the 75 to 80 percent that Idaho got in years past. This is a Vandal team with a target on its back - a small, rather insignificant target, but a target nonetheless. Colorado State's revenge will be sweet.

A whopping ten players return on defense for the Vandals, including overrated safety Shiloh Keo. Is bringing 10 players back on defense really a good thing for a defense that gave up 157 points in three consecutive games to close the season? Nope.

Nathan Enderle is back under center and fresh off being named one of Sporting News' Top 25 quarterbacks of 2010. Enderle is apparently the new Chase Holbrook. Deonte Jackson will likely be the team's new running back now that he is fresh of a one-year stint of not mattering because Idaho had better players for awhile there.

Who will fill in along the offensive line?

How important is the offensive line to the success of the Idaho Vandals? Well, the defense isn't going to stop anyone. Nathan Enderle cannot exactly be described as "evasive" (I would go with "slippery portly"). And the best chance that Idaho has of winning games is outscoring the other team and hoping that Robb Akey doesn't have to make late-game clock management decisions.

The Rat Pack of Vandal line possibilities include Guy Reynolds, Jr., Clell Hasenback, Tevita HalaHolo, and Tyron Novikoff. And I am pretty sure that at least one of those is a real person.

The question: Have the Vandals turned the program around or are these still the same old Vandals?

Last year's 8-5 season came out of nowhere, considering that Idaho had been all kinds of bad in years prior. The Vandals were considered one of college football's biggest surprises, and with a complete lack of historical perspective, media sources have pegged U of I as one of the WAC's strongest teams heading into 2010.

How can that be? The Vandals I know are inept, bumbling, and outmatched in almost every way. Could they really have gone from jayvee to annual bowl eligibility in the span of one season?

There are plenty of people who believe so. Those who are pro-Vandals credit Robb Akey with a tremendous turnaround, and they believe the team has that ethereal quality of simply knowing how to win.

Those who are anti-Vandals believe that the real Idaho was the team that lost four of five down the stretch, gave up copious amounts of points, and benefited from the inevitable swing of parity.

Which side do you take?

Before you answer, here are couple of things to consider about how the Vandals might turn out in 2010. First, here is a look at Idaho's nonconference schedule:

The Little Giants could go 4-1 against that schedule, which is fitting because I always pictured Rick Moranis playing Robb Akey in the Robb Akey career biopic Oh Mustache, My Mustache.

Now consider this: The Vandals went 5-1 in games decided by seven points or less last season. Football is a funny game in that a bounce of the ball one way or another can often decide close games. Chances are good that you cannot replicate a 5-1 record in close games year after year. One can assume that Idaho was no better than five of the teams they beat. The Vandals were only more fortunate.

So are the Vandals destined to repeat the success of 2009? Or was last year a once-in-a-blue-moon season? 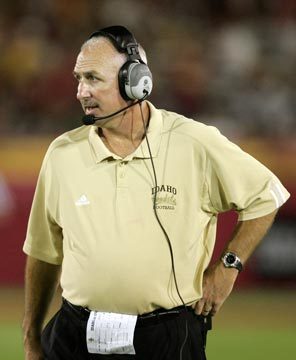 I wish death for that playsheet. (via seattletimes.nwsource.com)

Akey is now mentioned in the same sentence as Chris Petersen, and I do not mean sentences like, "Chris Petersen is the best coach in America and - hey, Robb Akey, I was still eating that!" That fact alone is enough reason for me to dislike him.

I want so badly for the Vandals to have a fan blog so that I can have an archenemy and you all can have a place for flame wars. Oh, Joe Vandal, why must you be illiterate? In lieu of a blogger, Vandal coverage can be found at the Lewiston Tribune and Scout.com. The closest thing to a blog is the work of student journalist Travis Mason-Bushman who has a mad crush on Vandal basketball.

Are the Idaho Vandals for real? What are your thoughts on the supposed renaissance of Idaho football? Do you think Nathan Enderle will be a competent quarterback in 2010? Share your thoughts in the comments and in the poll.