Boise State spring practice preview: What to expect, what to not expect

Share All sharing options for: Boise State spring practice preview: What to expect, what to not expect

Spring practice for the Broncos kicks off today, and to get you ready for a month-and-a-half of practice with hyperbole, here is a guide on what to expect and what not to expect when the Broncos take the field.

After the jump, find out what changes to expect, mark down the dates for the two public scrimmages, and feel free to share your spring practice thoughts in the comments. 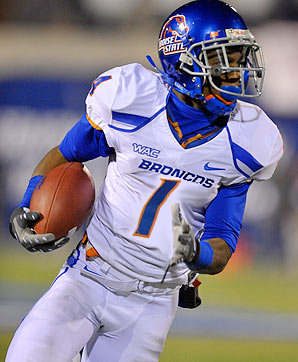 Bronco players love to waffle on jersey numbers, and this offseason appears to be no exception. Fact rumors have it that Titus Young will be the new No.1 when 2010 jersey numbers are revealed. Will there be other changes? You'll have to grab a ad-heavy Bronco Sports roster at the spring scrimmages.

After breaking his leg in the 2-point-conversion-heard-round-the-world last season, Pettis will be back to his old self in spring ball. According to coaches, he is about 90 percent recovered, and Pettis' 90 percent is every other college receiver's 100 percent, which is your and my 165 percent.

Without a doubt, Hout and White will be two of the biggest storylines during spring practice, much like Doug Martin's defensive turn was front-page news during last year's spring ball. Dustin Lapray already has haiku rough drafts ready. Three syllables for bandanna!

Do expect a full crowd at the Broncos' two public scrimmages

Bronco Nation's ardent fervor only grew stronger last year with a Fiesta Bowl win, undefeated season, and the opening of a clearance Bronco Shop in the Boise Towne Square Mall. Poinsettia Bowl t-shirts for 5 bucks? Thanks, but no thanks.

The Broncos will peel back the curtain for the public twice this fall. Get your time off requests in:

OBNUG will be at both, taking copious notes and re-typing the copious notes here for all who are unable to attend. Personally, I think all spring scrimmages should be broadcast on national TV, but that's probably just me.

Four things not to expect at Boise State's spring practice 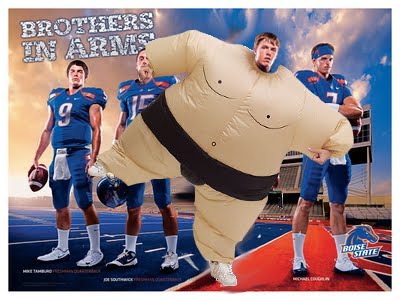 Do not expect to see several of your favorite players

If one or more of the following is a favorite player of yours, I apologize. But have you met Jimmy Pavel?

Above all else, health is on the minds of the Broncos players and coaches this spring.

"One of our No. 1 things that we’ve got to get done here in the offseason is get healthy," Petersen said. "So some guys will probably miss spring football. The goal for most of our team is to get our team healthy by summer."

As such, do not expect to see the above list of players hitting the field in any way, shape, or form similar to how they were field hitting last year. And just in case, Kellen Moore may be under center wearing an inflatable sumo suit.

Do not expect to see any incoming recruits

The Broncos' 2010 recruiting class has chosen to play out the string in high school, most likely because of some bad advice gleaned from an episode of Glee. You cannot sing your way through high school drama. Trust me. I tried, and it does not work, especially if your voice has not completely changed.

There will be no Matt Miller, no Troy Ware, no Jeremy Ioane and presumably no Tyrone Crawford. But again, you should really get to know this Jimmy Pavel guy.

Do not expect the offense to be ahead of the defense

We Bronco fans have a cyclical obsession with expecting fireworks at spring games and fall scrimmages, watching sloppy defensive struggles, then coming home and writing 5,000-word apocryphal fan fiction on our Boise State blogs. Or is that just me?

In spring and fall practices, the defense is almost always ahead of the offense, unless you are watching spring football at Nevada. Even more, having the defense ahead of the curve is normal. I guess I will have to reserve my fan fiction for that Kellen Moore - Kirby Moore buddy cop comedy.

As much as I would like spring practice to decide the depth chart and in-game strategies, it does not. At the very most, Coach Pete is likely to answer all of the spring questions with a "We'll see this fall" response once spring ball ends. Am I okay with that? Sure. I don't need facts in order to co-write Drew's and my annual depth chart predictions. I just need my context-modified Magic 8 Ball. Will Byron Hout start at middle linebacker? /shaking vigorously "My sources say BAD WORDS." Nuts.