The big news from Coach Pete's press conference yesterday was that starting right guard Kevin Sapien has called it a career due to lingering neck and shoulder injuries. Cortisone and David Augusto back rubs can only do so much, I guess.

With Sapien joining the student coaching ranks, what Boise State lineman will fill his spot? After the jump, take a look at the leading candidates, and leave your thoughts about who might take over.

Sapien was perhaps the Broncos' most consistent lineman last season. While all of his linemates had up-and-down cycles, Sapien was a rock, starting 12 of 14 games, rarely catching flack for missed assignments, and exhibiting a toughness that is a hallmark of blue collar Bronco lineman. Tonight, I will dream about Sapien pulling around on a trap play and flattening a Nevada linebacker. Then again, it's my dream, so I think I'll have him flatten Colin Kaepernick instead.

I am bad at goodbyes, which is why I let Dave Matthews do them for me. Skiddle-dee-do-wop-ba-boo (/guitar face), Kevin Sapien.

Get OBNUG readers hoopsbill and drofdarb a media pass and a Blizzard. These guys called the Sapien news way back in January. They are the Woodward and Bernstein of neck injuries.

Myers should be considered the leading candidate to replace Sapien for several reasons.

If it is true that Myers was the team's sixth-best offensive lineman last year (something we can assume since he was first off the bench when Garrett Pendergast was injured in bowl practice) and if Bronco coaches are indeed serious about his backing up Sapien on the depth chart, then Myers should be the man to replace Sapien. Right?

What might prevent this from happening is if Myers beats out Pendergast and company at the right tackle position - the spot he held down during the Fiesta Bowl. Let's say Myers goes from the team's fifth-best offensive lineman to its third-best during this offseason. Assuming he can excel both places, would you rather have a more talented blocker at right tackle or at right guard?

Kellogg got the start in place of an under-the-weather Sapien against Tulsa last season, and he more than held his own against the Golden Hurricane and in spot duty in Bronco blowouts throughout the year. The fact that he jumped ahead of Myers for the Tulsa game could be seen as evidence that Kellogg is a better fit at guard than Myers is. At any rate, Kellogg is one of the bigger linemen on the team (302 pounds) and would do justice to the guard position with his hard-nosed style of play.

Remember him? Yriarte missed all of 2009 with a torn ACL sustained in fall camp, and he is not expected to be fully recovered for spring practice next week. Still, back in the day, Yriarte was the team's backup guard and saw action in six games during his freshman season. Last fall, Yriarte was in competition for a starting spot on the line. Given the Sapien news, he may find himself in the same position this fall. 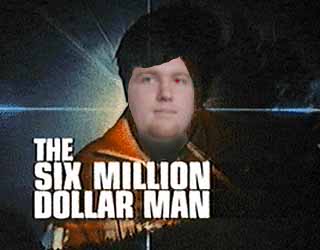 If we can rebuild him, he still has a year of eligibility left. Try pinching a nerve in his bionic neck. Go ahead. I dare you.

Chances are good that we will not have an answer on Sapien's position after spring camp. But that won't stop me from speculating. It will be fun to watch where Kellogg and Myers get their snaps, and it will be even more fun to discover what up-and-coming freshman or sophomore might make some noise. Spencer Gerke, anyone?

Is it possible that Sapien's replacement comes from out of nowhere? Of course. Is it more likely that his replacement is one of the three guys listed above? Yes.