Catching up with Louisiana Tech: Does a spread offense make the Bulldogs more dangerous?

Share All sharing options for: Catching up with Louisiana Tech: Does a spread offense make the Bulldogs more dangerous?

Fresh off an Idaho-like season of failure, the Louisiana Tech Bulldogs enter spring with a new coach, a new offense, and much lower expectations because no one trusts them any more. And by no one, I mean Phil Dailey.

Find out how the Bulldogs' offensive transition is going and discuss whether or not a spread offense is the right way to go for LaTech and the WAC. If you were a new head coach, what offense would you pick? Share your thoughts in the comments and in the poll.

All this week, OBNUG will be checking in with Boise State's 2010 opponents to see how their spring is going. Now: Louisiana Tech. Next: San Jose State and New Mexico State. Previously: Virginia Tech. Wyoming. Oregon State. Toledo. 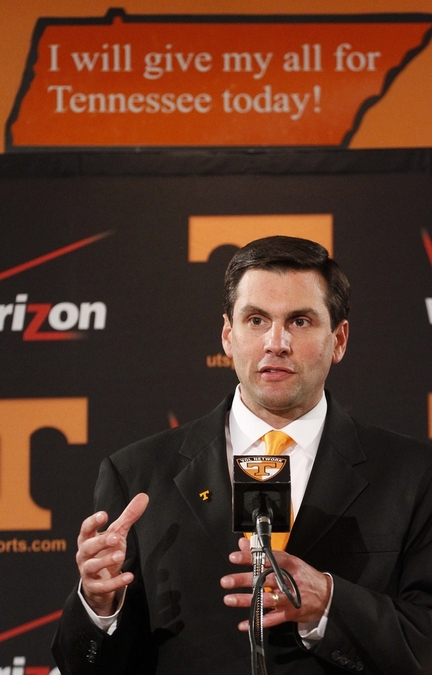 As reward for turning in a 4-8 season when everyone expected an 8-4 one, LaTech head coach Derek Dooley shuffled off to Tennessee as the new head man of the Volunteers.

The Bulldogs played the Broncos the closest out of any WAC team, thanks to a second-half surge inspired by a pick-six and Chris Petersen's scruples. An Austin Pettis TD catch and Jeremy Avery TD run put the game away late.

Dooley is gone and Modern Family lookalike Sonny Dykes is in. The son of a former coach (because that worked out so well for LT last time), Dykes has installed a completely new offense - an up-tempo, spread passing attack similar to what was run at Texas Tech.

Part of the reason for the change is a turnover in personnel, starting with offensive stars TE Dennis Morris and RB Daniel Porter, both of whom landed on WAC All-Conference teams last year. Defensively, the Bulldogs lose DT D'Anthony Smith, last seen making Will Lawrence look like a blocking sled, and five defensive starters overall. LaTech is tied with Idaho for returning the fewest starters in the WAC.

The strength of the Bulldog defense last season was MLB Adrien Cole who turned in a first-team All-WAC performance in his sophomore year. He and the majority of the defensive back seven return, as does fellow All-Conference pick OG Rob McGill. WR/KR Phillip Livas also returns, although he seems to have peaked in 2008.

More importantly, QB Ross Jenkins is the Bulldogs' incumbent starting quarterback, a job title that is tenuous at best considering the Bulldogs want to pass a lot and that is not a Ross Jenkins strength. Jenkins has had a rough offseason thus far, getting arrested for a DWI in February and missing parts of spring practice due to the death of his father. Freshman, 16-year-old-looking Colby Cameron is presumed to be Jenkins' main competition for the starting job.

Dykes is a pupil of the run 'n gun, spread passing attack, so it only made sense that he would prefer his new team install the offense. The Bulldogs hired offensive coordinator Tony Franklin to coach it up, and Dykes brought in a fair number of tennis ball machines because he saw it work in a movie once.

Of course the main goal is to get the offensive skill players used to playing at a faster pace and throwing and catching the ball more than they’re used to. The coaching staff even brought in tennis ball machines to shoot tennis balls at players so they could work on their hands.

Reports of the offensive scheme change are mixed, and not in a good way.

"I was really happy with our skill positions today, but again, we didn’t do a lot today," Dykes said. "We dropped a lot of balls, ran the wrong route several times and did a lot of things mentally that we have to improve on. But the overall athleticism [was there] and [the players were] responding to what the coaches were telling them."

To recap: LaTech players cannot catch the ball, run the correct routes, or think critically, but boy are they athletic and good listeners.

The question: Does a spread offense make the Bulldogs more dangerous?

Correct me if I'm wrong, but it seemed like Louisiana Tech was plenty dangerous before the spread offense. They routinely played the Broncos close (especially in Ruston) and were

But as they say in WAC coaching circles, "If it ain't broke, go ahead and fix it," and so Sonny Dykes has. Do you think that a spread offense makes Louisiana Tech any more dangerous than they were before? Some things to consider:

Regardless of whether or not this change gives LT a better chance to hang 50 on NMSU, how will it impact the Bulldogs' date with the Broncos? Share your thoughts in the comments and poll. 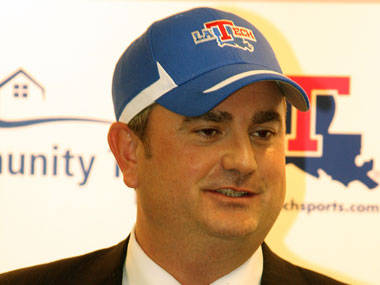 The WAC has been long for an inept, in-over-his-head, slightly portly head coach for some time now ever since the departures of Brent Guy and Hal Mumme. Thank you, college football gods, for Sonny Dykes.

"The first day I seemed a little bit lost but since then I’ve felt more comfortable," Dykes said.

That would be Dykes referring to his first day of practice, which is kind of an important part of his job. It is no surprise then that the first spring scrimmage was a four-hour fumble drill.

LaTech has surprisingly little online coverage, apart from an active message board (surprisingly not affiliated with Scout.com) and a local newspaper. Has the Deep South never heard of Blogger?

What are your thoughts on LaTech's move to a spread offense? Think they have the personnel to pull it off? Consider them to be a dangerous team on the Broncos' schedule this fall? Share your thoughts in the comments.