Catching up with Toledo: Will Rockets put up more fight than a I-AA team?

Share All sharing options for: Catching up with Toledo: Will Rockets put up more fight than a I-AA team?

Toledo makes for the Broncos' easiest nonconference opponent of the 2010 season. But is it better than having a I-AA team on the schedule?

After the jump, find out what Toledo has been doing so far in spring and discuss how dangerous or non-dangerous the Rockets will be when they visit in October. Would you rather have Toledo or Idaho State? Share your thoughts in the poll and in the comments.

All this week, OBNUG will be checking in with Boise State's 2010 opponents to see how their spring is going. Now: Toledo. Next: Louisiana Tech. Previously: Virginia Tech. Wyoming. Oregon State. 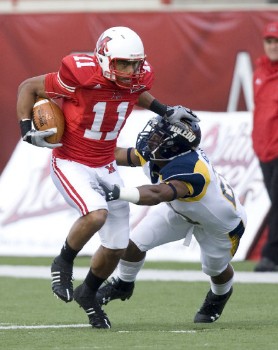 Toledo started off 4-3 on the season before fading down the stretch and missing out on a bowl, thanks in large part to a late season loss to Miami (Ohio). Yes, that Miami (Ohio).

The Rockets lost safety stud Barry Church to the NFL as well as major bulk with the departures of both DTs. The offense said good-bye to leading passer Aaron Opelt, leading rusher DaJuane Collins, and All-MAC first-team WR Stephen Williams.

But it's not all bad news. The most positive change for the Rockets is that the young kids are now a year older and are secure in the knowledge of how to beat Miami (Ohio). Tip: Just stand there and wait for them to implode.

Second-year head coach Todd Beckman is back, and he will be hoping to make good on the promise he unwittingly undid by failing hard and fast at the end of last season. First top: Twitter. And then a lift.

Beckman has some nice pieces to work with in new starting QB Austin Dantin (who saw time last season) and Freshman All-American WR Eric Page. The offense is expected to be the team's strength, especially with four of the five O-linemen returning. Defense? Eh, not so much. At least last year's epic failure of starting three underclassmen in the secondary means that there are three underclassmen in the secondary with experience this season.

I say defense, but I am willing to take arguments on punting

Toledo turned in the 116th-worst defense in college football season and then watched their best defensive player head to the NFL. That is not a good sign. No doubt that Beckman and Co. will be focusing on the defensive side of the ball in spring to make sure that a late-season meltdown does not happen again.

But then again, maybe some of their time this spring should be spent focusing on punting.

The punting game that was so good for so many years went into the tank under the new coaching staff finishing last in the nation in net punting coming up with just 28.68 yards per kick.

Emphasis added. Not that I needed to.

The question: Would you rather the Broncos play Toledo or a I-AA school like Idaho State?

As much as I hate to say this, the Toledo game reeks of Blowout City, population Hawaii Sugar Bowl. The Broncos' nonconference schedule features three of the team's toughest games of the year against Virginia Tech, Oregon State, and Wyoming. And then there's Toledo. Would the Rockets even finish in the middle third of the WAC? Call me WAC-biased (and you would be the first person ever to do so), but I have my doubts.

On paper, scheduling Toledo instead of a I-AA school is a smart move. Toledo plays in the MAC, which is still part of the NCAA Division I-A last time I checked. Toledo beat Colorado last year. Toledo may challenge for the MAC West title.

But when it comes down to it, is Toledo going to do that much more for Boise State's perceived strength of schedule than a date with an Idaho State or a UC Davis?

Which would you prefer: I-AA cupcake or semi-competitive MAC team? Keep in mind that BSU is obligated for a Toledo roadie next season.

My opinion is that scheduling Toledo is a good thing. These games get scheduled so far out in advance that you rarely have any clue whether or not a team will be good. If Toledo was Central Michigan would we be having this discussion? What if they were East Carolina? At the end of the day, a MAC team will always trump a I-AA school in my book. But it's close. And that road trip to Toledo isn't helping.

What is your take? Share your thoughts in the poll and in the comments. 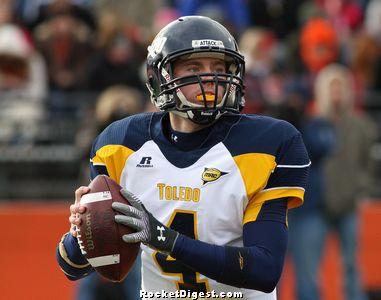 Kurt Warner called. He wants his dorky fragility back. (via media.scout.com)

He wears a glove when he plays quarterback. Enough said.

Already selling your seats to the Toledo game? Wish Boise State would have just scheduled a I-AA school instead? Think Toledo could sneak up and surprise the Broncos? Share your thoughts in the comments.