Riddle me this: 4 questions for the start of Spring camp.

Share All sharing options for: Riddle me this: 4 questions for the start of Spring camp. 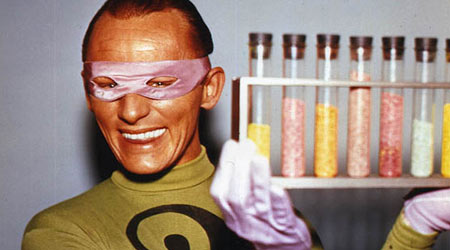 With a team returning 21 of 22 starters and coming off a 14-0 season, you might think the question marks would be few and far between. Well...they are—but when has that stopped us from questioning, dissecting, inquiring, theorizing, and/or probing? After the jump, I propose four intriguing mysteries looming at the start of our beloved Spring camp. Just to save time, I answered the questions as well...which usually means they're right on the money.

Not bloody likely. With basically the entire defense returning—one that was in the top 20 last year in a slew of statistical categories—Coach K can pretty much put this baby on autopilot. The only circumstance I could see warranting a change in defensive philosophy would be if Coach Wilcox had been fired, but the fact is, he was headhunted for a new SEC staff and the Broncos made an internal hire. Coach Kwiatkowski has DC experience...and I don't think it will take much of it to realize that you don't mess with a good thing. Sure, we'll see some of Coach K's fingerprints on the defense immediately...but we aren't going to give up the 4-2-5 base defense with Winston Venable et. al coming back. Coach K's more likely to shake things up in a few years when a mass exodus of the Broncos current defensive studs takes place. First game out of the chute in 2010...Virginia Tech. A team with a backfield tailor-made for the spread...trust me, we'll be seeing plenty of Nickels and Dimes come Labor Day. Coach K's greatest coaching move next year will be to coach as little as possible.

Which 2009 redshirts are going to start imposing their will?

Boise State nabbed its fair share of studs in the class of 2010, but most, if not all, won't be joining the team until summer...meaning that the first bit of new blood the Broncos will see this Spring are the 2009 redshirts. There are many among that group that are probably good enough to start, but with the number of returning starters the Broncos will have next year, slots will be hard to come by.

Obviously, Kyle Wilson's departure will set up an intriguing race for one CB slot...and I fully expect it to continue into the Fall. Odds-on favorites right now would have to be either Jerrell Gavins or Jamar Taylor, but I think that Quaylon Ewing or Ebo Makinde will start making things interesting immediately. Gavins is probably the fastest...Taylor probably is closest to Kyle Wilson in the gym...Ewing and Makinde are the rangy ones. Maybe we should call in our resident Dr. Frankenstein and have him stitch these 4 together.

The running back everyone wants to see is Malcolm Johnson. His high school highlight reel is nearly as long as an uncut Lord of the Rings movie and he has the potential to be a star. The question is: will it be in 2010? The Broncos depth at running back is seriously a little bit ridiculous...fielding at least 4 backs that could probably start for any school in the conference. This will be Jeremy Avery's swan song, so don't expect his touches to diminish much, and Doug Martin showed last year that he is simply too good on offense to be an experimental safety. Then there's the anticipated return of D.J. Harper, who prior to his injury, may have been the Broncos' best back. No one knows how he'll rebound from an ACL tear...but chances are that Johnson will probably be sitting in the 3-slot as I don't expect D.J. to be quite ready for live action just yet. Whether Johnson can stay in that slot as the season begins has a lot to do with how far Harper has come since his injury and how committed the Broncos are to spreading the ball around. Remember, Doug Martin came on strong last year but still had trouble prying touches away from Avery. Johnson has the skills to become a factor, but lands in a logjam that might not see him really emerge till '11.

Wide receiver depth was seriously thrown into question after Tyler Shoemaker and Austin Pettis went down with injuries late last season. Kirby Moore played as a true frosh, but two other talented wideouts went the redshirt route and should be ready to go this Spring. Aaron Burks nearly played last season, and Pettis might still be a bit ginger (not tthat kind of ginger) with his ankle, so expect to see Burks getting a lot of reps in camp. Geraldo Hiwat is a speedster that could add another deep threat for the Broncos, but would we ever see Hiwat and Young on the field simultaneously? The Dutchman is extremely raw, but explosive...we'll see how well he was coached up during his redshirt year very soon.

Along the lines, I doubt we'll see many big changes. The starters along the entire D-line legitimately run 4-deep, but don't be surprised to see either Justin Jungblut, Nick Alexander or Ricky Tjong-A-Tjoe start pushing for rotation time. J.P. Nisby and Greg Grimes and Mike Atkinson performed admirably last year, but didn't do enough, in my opinion, to irrevocably entrench themselves, so having a redshirt (or two) slip into the depth chart is entirely possible. Lest we forget...a walk-on out of Council, Idaho by the name of Matt Paradis was the redshirt that earned the Defensive Scout Player of the Year honors. Paradis could certainly be a factor after bulking up to 275 lbs. and his white man 'fro is approaching Jerrell Root levels. The O-linemen that redshirted in 2009 that is most likely to make a splash is  Charles Leno. He was widely considered to be the gem of the '09 class and any attrition or injuries could certainly swing the door wide for the big fella.

Beyond that, expect to see some redshirts start to get their feet wet on special teams and QBs Southwick or Tamburo to start having their names written in pen instead of pencil on the depth charts. Smart money would certainly be on Southwick making some depth chart moves as early as next week. 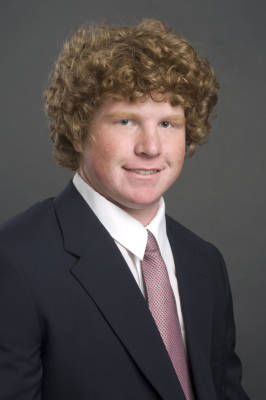 Will Kellen Moore ever take a step back?

Obviously, this question can't and won't be answered until the 2010 season gets underway, but it's an interesting thought, nonetheless. Many pundits felt that a sophomore slump was inevitable for Moore after he garnered freshman All-America honors in 2008...and let's be honest, some amongst our ranks, short of expecting it, at least feared that Moore might fall back to earth ala Jared Zabransky in 2005. Luckily, and not surprisingly, Moore answered the bell in 2009 and put up Heisman-caliber numbers en route to a second-straight undefeated regular season and a BCS bowl berth. At this point, it is no longer fashionable to question Moore's abilities or his level of competition...he's met all challenges and legitimately cemented himself into the national discussion. What Moore can do for another encore (don't forget, we have him for two more seasons) will largely be based on how he starts preparing for this next season...and that starts in mere days. Kellen's preparation and study habits are starting to become legendary, but I expect him to attack the gym, the film room, and the field with an even higher intensity  in 2010 knowing that the Broncos could achieve even greater heights this year. Will Kellsy throw more than 39 TDs and less than 3 INTs in 2010? Those are mind numbing stats, but don't bet against the kid...I'm sure those 3 INTs stuck in his craw long after he threw them and he knows his touch on the long ball could be a bit tighter. 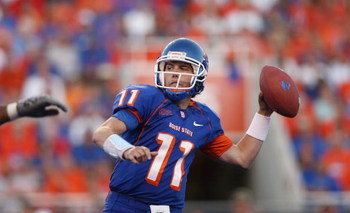 "What fools these mortals be."

I purposely left these two out of the redshirt discussion earlier as I felt they deserved their own spotlight. Which highly-touted LB recruit is going to emerge in Spring ball? Both players were heavily recruited out of high school, but both bring a different skillset to the table. Allen Mooney is your prototypical Boise State middle linebacker...a tad undersized, but a ferocious competitor and a production machine. Mooney will remind many Bronco fans of Andy Avalos in height and build and I doubt anyone would mind having another Avalos-type LB in the middle. Question is: does the 4-2-5 defense have room for a Mooney type of 'backer? Consider also that Byron Hout is said to be making the move to MLB (make way for Tyrone Crawford). The LBs that tend to fit the scheme best are "tweener" types that can seamlessly drop into pass coverage as well as put up stops in the middle. We know Mooney can do one, but not sure about the other. John Michael-Davis is the "tweener" of the two...he is a bit taller, a bit faster and has experience playing the safety position. Could Davis sidle up behind Winston Venable (and now Hunter White) on the Nickel chart...paving the way to secure the position in 2011? Will Jeremy Ioane fill that void when he arrives this summer? Now the questions are just simply getting out of hand. From what I saw last Fall, I was most impressed with Mooney's run-stopping ability and big hits...and he's the first LB that we've had since Korey Hall that looks like that in the middle of the field, but Boise State hasn't ran a 3 LB scheme since 2007, and I know that coaches will be looking for a very specific type of player to keep the rotation fresh. What I do know is this: either man is fully capable of making a huge impact on the Broncos' D, but JMD probably most closely resembles the current cast...if it's more of the same that they're after, he may indeed get the nod. It will be a fun race to watch, and I am definitely crossing my fingers and hoping we'll see a lot of both.