Catching up with Wyoming: Just how long does bowl win momentum last?

Share All sharing options for: Catching up with Wyoming: Just how long does bowl win momentum last?

This spring, the Wyoming Cowboys are fresh off a New Mexico Bowl win and are filled with the type of confidence and eagerness that is typically reserved for a Mark Johnson newscast. Can the Cowboys expect to ride their momentum all the way into the 2010 season?

After the jump, find out how spring practice is going for the Broncos' second non-conference opponent of 2010. And share your thoughts in the comments about how long momentum lasts and whether or not Wyoming will have any left when the Broncos roll into town.

All this week, OBNUG will be checking in with Boise State's 2010 opponents to see how their spring is going. Now: Wyoming. Next: Oregon State. Previously: Virginia Tech. 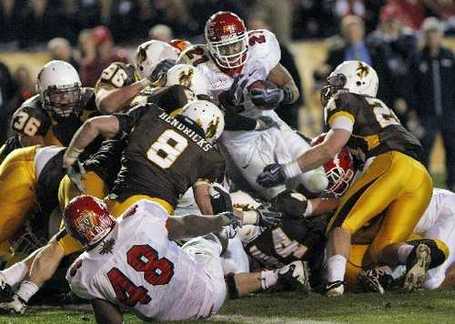 The Cowboys used a goalline stand and the inevitable fail of a Fresno State postseason to capture a win in the New Mexico Bowl and finish with a 7-6 mark in a year where most experts thought they would be horrible.

Wyoming is going from a 3-4 to a 4-3, something that Boise State does on a play-to-play basis. The biggest losses came up front for the Cowboys as they lost stud DT John Fletcher and both of his starting linemates.

On offense, three big bodies will also be absent from the offensive line as the Cowboys graduated three starters from last year's team. The silver lining is that they were not very good, but the black cloud is that no one else was good enough to jump them on the depth chart.

Attrition along both lines will be rough for the Cowboys, and it's only a little ironic that the most talked about newcomers to the team play neither position. JC transfer wideouts Mazi Ogbanna and DeJay Lester are expected to boost the Wyoming passing game, and true freshman RB Nehemie Kankolongo could impact the running game. Fun fact #1 about Kankolongo: He's from Canada. Fun fact #2: He injured his MCL in spring practice and will be out until fall.

The Cowboys return the MWC's worst total offense in a turn of events that second-year head coach Dave Christensen terms "experience." In fact, Christensen may be the best thing that the Cowboys have going for them. The former Missouri assistant did quite a number to turn the Cowboys around last season and instill a work ethic in the team. I need to get him down to my local Best Buy because it should not take 15 minutes for me to get help finding a Taylor Swift CD.

The Cowboys may have the MWC's top secondary this year, and its linebacker play is expected to be great. MWC Freshman of the Year QB Austyn Carta-Samuels is back, and Christensen expects Wyoming to be much better moving the ball this season. He is determined not to become the Brian Billick of the MWC

Christensen has wanted to change up the Cowboys' defense since he arrived in Laramie last season. And now that he has a New Mexico Bowl trophy, he can have whatever he wants. Except, as yet, a regular season win over a bowl-eligible team.

The change is designed to limit big plays and to hopefully improve upon Wyoming's 81st-ranked defense from last season. The first step is for the players to learn the new playbook and some to learn new positions. Some key contributors on the defensive line are out until fall, so there is little that can be done in the trenches.

The question: Does momentum carry over from season to season?

Christensen has brought a lot of hype to the Sagebrush State with his surprising bowl-eligible season. The community has bought in. The players have bought in. Expectations are that this could be a middle-tier-and-up MWC team in the fall.

But how long can you realistically expect the momentum from a bowl win to last? Media reports claim that spring practice has had an entirely new feel thanks to the success of last season.I don't doubt that. But I don't doubt this either.

What are your thoughts about momentum? I am of the mind that momentum lasts you about through spring practice and then hype and expectation take over once fall ball resumes. Can you think of some cases where bowl momentum carried all the way into the next season? Share your thoughts in the comments. 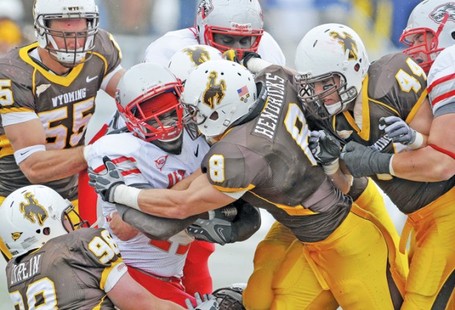 Muscles by HGH. (via bloximages.chicago2.vip.townnews.com)

The Cowboys' top defensive player, MLB Brian Hendricks reminds me a little of a hard-nosed linebacker like Korey Hall. And there is only room in my heart for one Korey Hall. You can have my small intestine, Brian Hendricks, but I don't think you are going to like it there.

Here are some more reasons to not like the Cowboys' defensive MVP. 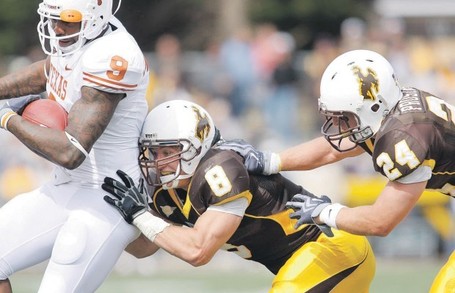 You're doing it wrong. (via bloximages.chicago2.vip.townnews.com)

Last Saturday: First spring scrimmage. From what I could gather, the ground game looked impressive as did Carta-Samuels. And judging by a local TV station's graphics, the scimmage apparently took place in 1994. 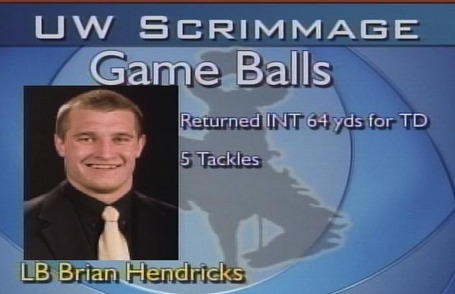 Casper Star-Tribune reporter Eric Schmoldt keeps a Wyoming blog as does the eponymous Wyoming Cowboys Blog. The Casper Trib is a good source for scrimmage information, and if the glut of Cowboys stories is any indication, Graham Watson has a new crush.

What is your take on bowl win momentum? Think Wyoming will still be sky high by the time they face the Broncos? Impressed by Dave Christensen? Embarrassed for Brian Hendricks' tackling skills? Share your thoughts in the comments.