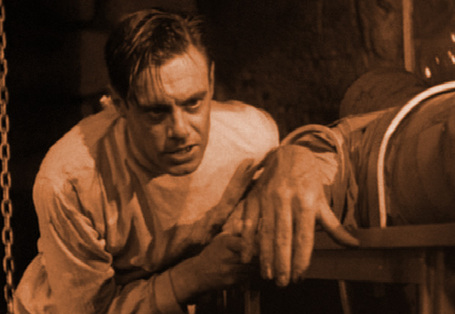 As sports fans, we're fond of hypotheticals. We've all seen compiled our fantasy squads and all-time teams and wondered how an undefeated 2006 Bronco team would rate against the 2009 version. Well, OBNUG will be taking it one step further over the next few weeks. We're going to be assembling the perfect theoretical Bronco team by mashing up the best traits of the best all-time players into hybrid super Broncos. So if you've ever wondered how Ian Johnson would've fared with Antwon Carter's calves...this is your kind of series. We'll begin playing God after the jump.

Now, we're assembling the perfect Bronco running back by slicing and dicing some greats from the past and present. Mind you, this "slicing and dicing" is purely theoretical, so nobody call the cops or anything. When thinking about what makes a great running back, there's three things I look for first: Speed, Toughness, and Heart. Most elite running backs will have 2 out of these 3 traits, while the best of the best will have all 3. Let's dive in and assemble the perfect Bronco running back...Igor, hit the lights.

Speed can be a deceptive stat. As training regimens, nutrition, and conditioning get better and better...teams get faster and faster. No one can deny that the Broncos have more teams speed right now than they've ever had, and it isn't a stretch to believe that Boise State may well have their fastest running backs ever on the current roster as far as measurable speed. We're still going to consider some burners from the past and present, but at the end of the day...we are just as likely to bow down to the almighty stopwatch like everyone else.

John Smith played for the Broncos from 1972–1975 and was a real doozy. His nickname was "the Needle", and I'm guessing it had to do with his propensity to hide in haystacks. Smith held the record for best single-game YPC average (12.5) until just last year, when it was broken by Jeremy Avery. Smith was a do-it-all back of the highest order...running, receiving, and returning kicks. In fact, Smith may be the best receiving RB in Bronco history, finishing with over 1,600 receiving yards in his career (he notched nearly 900 of those yards in 1975 alone). Smith's 40 times are purely speculatory, but he sure could pull away from defenders in his day...to the tune of almost 3,600 all-purpose yards.

K.C. Adams is a name that is still somewhat fresh in the collective memories of both older and younger Bronco bandwagon hangers-on. Adams' body of work pretty much resides in one magical season—1994. During the '94 run to the 1-AA National Championship game, Adams racked up nearly 1,300 rushing yards and approached the 2K mark in all-purpose yardage by returning punts and receiving. Adams' big year had seven 100+ yard games, capped by a game against CS-Northridge where he tallied 257 all-purpose yards.

No one knows if DJ Harper will lose a step after an ACL injury sidelined him in 2009, but among the current speedy crop of 'backs...Harper is the fastest. Now, it would have been real easy to just put up the Broncos' current three-deep, and toss in Ian Johnson for good measure. They all have breakaway speed and have all been clocked at 4.4 and below. Surpisingly enough, Harper beats them all. I say "surprisingly enough" because man, it looks like Jeremy Avery is faster...but I suppose that's due to his diminutive stature...I mean, have you ever seen how fast squirrels appear to be going. Harper is a rare back in that he supplements his speed, with balance, vision, and power. He looked to be easily the best RB on the field last year before his knee injury at Fresno State. God willing, Harper will be back to his old tricks in 2010. The "punishing defenses" trick...not the "breaking his knee" trick, of course.

Being a running back is serious business. Every down, you are either running straight at 11 guys that are generally bigger than you and eager to kill you or you are sacrificing your body, blocking more dudes that are much bigger than you so your quarterback doesn't get hit. It is little wonder that running backs have a very short shelf life...these guys here were some tough S.O.B.s.

David Hughes was a member of the quartet known in Bronco lore as the Four Horseman, and played for some of the best Bronco teams ever between 1977 and 1980. Hughes came to Boise from Hawaii and immediately made a big impact on a team that was not hurting for depth or talent in the backfield. The fact that Hughes shared carries with Cedric Minter, and Terry Zahner and still waltzed away with nearly 1,900 yards and 12 TDs is truly amazing. Hughes was technically a fullback, but was a deft enough runner (and tough one, to boot) that he still had over 350 career carries. When is the last time you saw a fullback at Boise State (or anywhere else) do that? Hughes was basically a halfback in a fullback's body and averaged over 6 yards per carry his junior year. Re-diculous.

Terry Zahner shared the backfield with David Hughes and Cedric Minter, and still finished his Bronco career with 426 carries. He actually led the team in rushing his freshman year with 724 yards (again, with Minter and Hughes at the ready) and approached a 5 yard/carry average over the span of his career. Possibly the true testament to Zahner's toughness was that after starring as a freshman, he gracefully accepted diminished touches in his subsequent years after Minter's star-turn and continued to be a productive, team-first role player.

Brock Forsey was not the biggest guy, or even the fastest...but this local product sure could play some football. Between 1999 and 2002, Forsey racked up 6,670 yards of offense and put up pinball-type numbers. Forsey ran over, through and around defenders much larger than he throughout his career, but his body-sacrificing touchdown leaps were his biggest legacy (see below, 1:12 mark). Forsey led the nation in all-purpose yardage as a senior, 1,611 coming on the ground, 282 through the air, and a 26 yard kick return average. On top of everything, Forsey rarely was hampered by injury, despite his breakneck style of play and put in one of the finest bowl performances ever by a Bronco when he piled up 270 all-purpose yards against Louisville in the 2000 Humanitarian Bowl his sophomore year.

At one point in time, it seemed inevitable that Cedric Minter's career yardage record would fall to Ian Johnson. It never happened. Among other things, Johnson racked up too many injuries to threaten Minter's record in the end...but playing through those injuries is exactly what landed Johnson on this list so go figure.

Cedric Minter, Brock Forsey, Ian Johnson. Those are kinda the "big three" in Bronco history when it comes to the most prestigious running back slots in the record books. Minter has been king of the hill for a good long time when it comes to career rushing numbers (4.452), and he's sure to stay there for a while. During Minter's Bronco career (1977-1980) he carried the ball 752 times, which could certainly put him in the "toughness" category, but force of will and heart had to have carried him a good many times. Minter's consistency got him in the record books, by and large, as he ran for over 1,000 yards in his final three seasons with the Broncos, reaching his pinnacle in 1978 with 1,526 yards. Minter's career YPC average of 5.95 yards is darn good any way you slice it and his durability was never in question as he on multiple occasions carried the ball upwards of 30 times in a game. Minter, a local product, was and still is the man at Boise State.

Chris Jackson held RB duties for the Broncos in 1986 and 1987 and while you won't find his career yardage or TDs atop any Bronco record books, Jackson willed himself to the top of another stat sheet—yards per carry. Jackson averaged 5.97 yards per carry over his career, topped by a 6.3 YPC average in 1987. Think about that for a minute, if you will...when Chris Jackson touched the ball on first down, the average marker for the subsequent second down was 2nd and a long 3. The fact that the Broncos went 5-6 and 6-5 in '86 and '87, respectively, says a lot about the ineptitude of the rest of the team. They were gifted 2nd and short every time Jackson carried the ball, and still managed mediocre seasons. Give us that now, with our current offense and we may well score 100 points per game.

Ian Johnson's 2006 was an interesting one. He burst onto the national scene with a 240-yard 5-TD game against Oregon State, then kept his momentum going en route to a 25-TD season and a darkhorse Heisman campaign. He also punctured his lung in a gritty performance at San Jose State that year and returned just two weeks later to clinch a WAC title against Nevada. No one can say that Ian Johnson didn't have heart. Yeah, two paltry weeks after playing through a potentially life-threatening injury and a week-long hospital stay with a tube in his side...Ian Johnson was back on the field running (nearly) as hard as ever. Then 2007 came and saw more freakish injuries...hernia, bruised kidney, etc. and the kid kept on going. Sure, he never again quite reached the heights he'd scaled in 2006, but Ian Johnson would still put up another 29 rushing TDs, eventually surpassing WAC legends LaDainian Tomlinson and then Marshall Faulk for that record. All told, Ian finished his career with 4,184 yards rushing (5.48 YPC) and 58 freaking TDs. Oh, and he knits, too—heart, I tells ya. 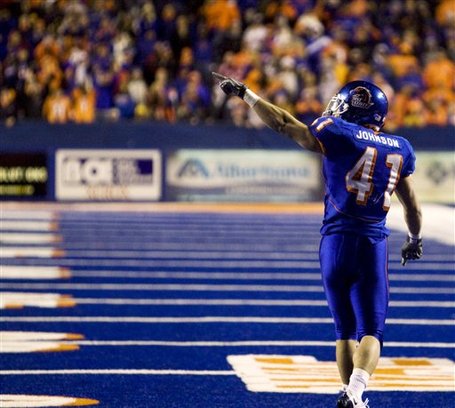 Ian left it all on the field. Even his spleen.

So there you have it, we've made a Bronco RB monstrosity that simply cannot be stopped (lest it's by villagers with pitchforks and torches). If you think I made a glaring omission, let's talk it out, no need to fight about it. Until next week, Igor, shut'er down.