Who is Boise State football's top newcomer to watch in 2010?

Share All sharing options for: Who is Boise State football's top newcomer to watch in 2010?

There is plenty to get excited about when it comes to the Broncos' 2010 season. There is the national championship chatter, the grassroots Kellen Moore Heisman campaign, and the long overdue Marty Tadman bobblehead announcement. But are there any newcomers to get excited about?

You bet there are. Join me after the jump for a quick spin around the Broncos' roster, and share your thoughts on who the top newcomer will be for Boise State in 2010.

Graham Watson sparked this topic with her post yesterday on the top newcomers to watch among non-BCS players. Her list included zero Broncos. And, bravely, no Notre Dame quarterbacks. 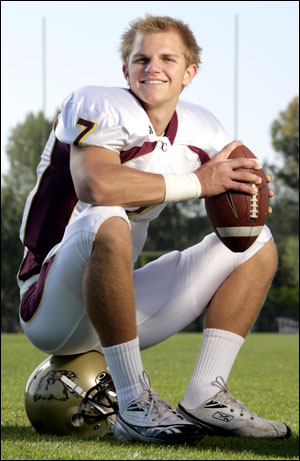 The lack of Broncos got me thinking: Are there any newcomers at Boise State worth getting excited about in 2010?

Of course there are. Last year saw the arrival of Winston Venable, Jerrell Gavins, Kirby Moore, JC Percy, Daron Mackey, and more. The year before that was George Iloka, Kellen Moore, Thomas Byrd, and friends. Boise State's roster is deep and talented, which is a credit to the players in the current starting lineup as well as those newbies on their way up.

Don't get me wrong. When you return 21 of 22 Fiesta Bowl starters, you should not expect to place too many players on "Newcomers to Watch" lists. Graham Watson was not wrong in excluding the Broncos. However, as a Boise State fan, part of the fun from year to year is getting excited about the new players on the team and imagining how they might impact the season.

So with that, who is your top Boise State newcomer in 2010?

Here are some candidates:

Note: I feel that newcomers should include redshirt freshmen as well as true freshmen and JC transfers. Basically, anyone who did not play last season is in the running.

The junior college transfer will have every opportunity to crack the defensive line rotation and may even be an All-WAC performer by season's end.

The Montana high school star was promised a shot at true freshman playing time by the coaching staff, and he could find a spot on a very fluid WR depth chart.

Sure, he's stuck behind Jeremy Avery, Doug Martin, DJ Harper, and Matt Kaiserman, but he is the future of the Bronco backfield and if injuries take out some names in front of him he could be called on in big spots this season. Plus, YouTube!

Boise State's linebacker corps is undoubtedly deep yet schematically brief, kind of like a Deep Thought by Jack Handey. Mooney will benefit from the open competition at the position, but having only two spots to fill may limit his exposure.

See above. Plus, I think it's about time Bronco fans had a three-named star to abbreviate.

The scout team's Defensive Player of the Year in 2009, Paradis got his Bronco career off to a good start, and he could find himself fighting for playing time behind Billy Winn and Chase Baker this fall.

Last fall, Burks had many believing that he would be playing as a true freshman rather than Kirby Moore. With a year of training and practice, Burks may be the best prepared redshirt to make an impact in 2010.

Who else might make an impact in 2010? DT Ricky Tjong-A-Tjoe? WR Geraldo Hiwat? QB Joe Southwick? Someone else?

I see a lot of similarities between the 2009 newcomers and the 2010 group. There is a JC transfer (Crawford) who could make an impact on defense. There is a true freshman wide receiver (Miller) who could play right away. With only a few spots on the roster to make an immediate impact, the newcomers are obviously a bit limited.

Rather than take Crawford or Miller as my pick, I am going to go with LB Allen Mooney. Both Mooney and JMD were big-time LB recruits, and the linebacker spot is one place that Bronco coaches are not afraid to shake things up. Given a good spring and fall camp, I think Mooney could be making plays with regularity come WAC play.

Who is Boise State's top newcomer in 2010? Which player do you think will have the biggest impact? What position might have the greatest opportunity? Share your thoughts in the comments, and don't forget to vote in the poll.