Boise State's numerical roster: What Bronco player will wear No. 1 next year?

Share All sharing options for: Boise State's numerical roster: What Bronco player will wear No. 1 next year?

After the jump, find out who is the favorite to wear No. 1 next season, discuss other number openings, and share your favorite number as a player and a fan.

One of Boise State's best offseason traditions is the awarding of the No. 1 jersey. Kyle Wilson took over No. 1 from Jerard Rabb in the 2007 offseason (Bonus for anyone who can name Wilson's number prior to No. 1). Rabb followed up Chris Carr, who followed the likes of Jay Swillie and Winky White. Who's next?

A list of candidates would certainly include Wilson's CB other half, Brandyn Thompson, who will undoubtedly get some attention this offseason as reigning Fiesta Bowl DMVP. Jeron Johnson and George Iloka may also be in the mix thanks to Chris Carr's historical precedent.

But really, I think the fight for No. 1 won't really be much of a fight at all. 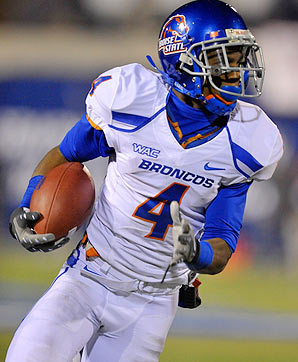 Great. Now I have to spend an hour trying to update my NCAA 10 rosters. (via i2.cdn.turner.com)

Thanks to an insider tip from reader peteypablo, the safe money has got to be on Titus Young. Sources say that Young is in the market for a new number, statistics say that he is the Broncos' most effective big-play threat, and fans would have to agree that Young would most certainly do the number proud. When jersey changes are announced (most likely before spring practice starts), I expect Young to give up his No. 4 in exchange for his No. 1.

Do you think Young is the Broncos' next No. 1? Anyone else you think might get the number?

What other numbers are up for grabs?

The NCAA's uniform rules, if you can call them rules 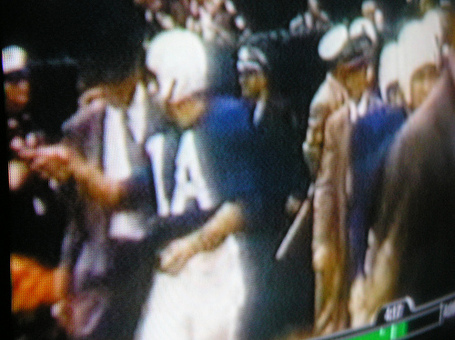 Something tells me the CFL had something to do with this. (via farm3.static.flickr.com)

Exceptions are so common they can hardly be labeled exceptions any more. What is your favorite number abnormality in the college game? I'm always a big fan of defensive linemen wearing single digits.

The only rules that come into play with jersey numbers are on lineman-eligible plays and duplicate number instances.

There are lots of numbers to choose from for the incoming recruiting class, last year's redshirts and grayshirts, and pretty much any Bronco player anxious to switch up the jersey. What might we see in 2010?

No. 40. Who will wear Richie Brockel's old No. 40? I would love to see Dan Paul switch to 40 and then have the digits become a Bronco tradition for fullbacks. I'm sentimental like that.

Incoming DE recruit Tyrone Crawford could be the player to make the biggest splash from the 2010 class. He wore No. 92 at JC. What do you want to see him wear at Boise State? I think No. 67 would fit him well.

What jersey predictions do you have? Share them in the comments.

What is your favorite jersey number?

Maybe it's one that you had during your starcrossed high school career. Maybe it's a favorite date or address. Maybe it's a lucky number. What jersey number are you partial to?

I wore No. 51 in high school when I played both ways as a center and a linebacker, and I have loved the number dearly ever since. But I haven't had any No. 51 Broncos to root for since Dallas Dobbs. Is incoming LB recruit (and soon-to-be Mormon missionary) Darren Lee destined to be my new favorite player?