Share All sharing options for: Boise State defensive coordinator Justin Wilcox to Tennessee a "done deal," according to sources

Boise State defensive coordinator Justin Wilcox appears on his way to Tennessee to serve as the Volunteers new defensive coordinator under new head coach Derek Dooley. Multiple sources confirm that Wilcox's move is a "done deal" and that an official announcement is expected in the coming days.

After the jump, read more on this breaking story, including the frontrunner to replace Wilcox at Boise State and the decision's effect on Signing Day. And share your thoughts in the comments about what this move might mean to the Broncos going forward.

Thanks to MKingery and Drofdarb for being on top of things with the FanShots.

The details of Wilcox's move to Tennessee

The fourth-year assistant coach is expected to leave the Broncos in the coming days for the University of Tennessee to become their defensive coordinator.

Multiple sources within the Boise State athletic department say it's "a done deal."

KBOI 2Sports has learned Wilcox heard last night from Tennessee, and made the announcement to the team Tuesday morning.

Wilcox has referred any questions to Boise State's Sports Information department, which refuses to confirm anything. VolunteerTV in Tennessee was one of the first media outlets on the story, and they have yet to get a complete confirmation either.

Eventually, once the tears and Blizzard benders wear off, Bronco fans will need to turn their attention to who's going to fill the void at defensive coordinator. J Bates has the scoop on that as well:

It is expected that defensive line coach Pete Kwiatkowski will be named the new defensive coordinator at Boise State.

Kwiatkowski seems like an excellent choice to replace Wilcox. He is a member of the Boise State Athletic Hall of Fame for his football exploits during his playing career.

A standout on Boise State's defensive line from 1984-1987, Kwiatkowski earned four first-team All-America awards in 1987 and honorable mention All-America recognition from the Associated Press in 1986. He was named the Big Sky Defensive Player of the Year in 1987, received first-team All-Big Sky honors in 1986 and 1987, and honorable mention honors as a sophomore in 1985.

From a coaching standpoint, Kwiatkowski is a well-rounded, experienced defensive orchestrator. He served as defensive coordinator during a six-year run with the Montana State Bobcats, and he has coached Boise State's secondary, linebackers, and defensive line during his tenure with the Broncos (1988-1996 and 2006-present).

As with any coaching change, there will be some questions. Here are the most notable ones if Kwiatkowski does indeed replace Wilcox:

Is being defensive coordinator at Tennessee really that much more than a lateral move?

I understand that Tennessee plays football in the SEC and that their stadium seats 100,000 and that five-star athletes tend to play there. But what about all this talk about college football parity and equality and the removal of the glass ceiling between BCS and non-BCS schools? I guess Tennessee is still Tennessee no matter how bad things have been there for the past several seasons.

I would be curious to know Wilcox's thought process because there are certainly a few reasons to leave for oranger pastures. However, at the same time, I think that there are some pretty valuable reasons in staying put.

Bronco fans, you are free to despise this man for the rest of his coaching career. 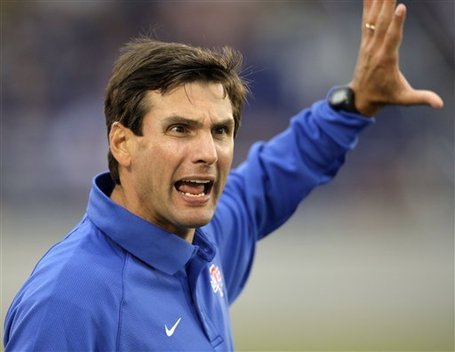 Dooley, the new head coach at Tennessee, made a pretty remarkable hire in sweet-talking Justin Wilcox out of Boise. I am happy for Wilcox and the opportunity for him to showcase his defensive expertise at the SEC level. I am burning Dooley in effigy tonight for breaking up what was the greatest coaching staff in college football. Anyone want to come over and watch?

Wilcox was instrumental in wooing Hawaii high school DB Jeremy Ioane who will make his college decision tomorrow. With Wilcox gone, is Ioane gone, too?

Tennessee fans are skeptical, but can you blame them?

A great source for Tennessee feedback on this story will be SB Nation's Tennessee site, Rocky Top Talk. The conversation has already started in a FanShot. And by "conversation," I mean "creeping self-doubt."

I would be surprised by this. wouldn’t be my first choice.

Kind of a wait-and-see prospect for me. He is a young up and commer though, and he seems to be able to coach against the spread which would help against the gators.

For the most part, I believe that Tennessee fans will be pleased with this hire once all the dust settles. And once they beat Florida next year behind a Wilcox defense.

Here's something new to chew on: Is Justin Wilcox a better coach right now than Derek Dooley is?

Dooley did not have the on-field performance to warrant a big-time coaching position at Tennessee, which does not necessarily mean he will fail at his new job. However, I think he will fail. And when/if he does, the Volunteers would have an ideal head coaching candidate right under their noses with Wilcox. And with that, let the coaching rumor mill begin for 2013.

Safe to say that very few of us saw this coming

A good resource for this Wilcox situation is the post that I wrote three weeks ago about the possibility of Boise State losing one of its top coordinators. The comments section was full of denial that either Wilcox or Bryan Harsin would be out the door. We all decided that Wilcox would be the toughest to replace if one of them were to leave. Oh, we were so naive back then.

A lot can change in three weeks, huh?

What is your take on the Wilcox situation? Do you feel confident with Kwiatkowski taking over? How might this impact the Broncos' chances in 2010? Leave your thoughts in the comments.