Share All sharing options for: Boise State recruiting: When will WR Troy Ware see the field?

One strength of last year's team (and any team, really, when Kellen Moore is the QB) was the receiving corps. Led by the stretchy Austin Pettis and the flashy Titus Young, the Broncos feasted on hapless secondaries all year long. However, towards the end of the season, with Austin Pettis nursing a broken ankle and Tyler Shoemaker recovering from a hernia...the strength of the Bronco offense had become a bit of a liability. Certainly, skill and athleticism abound on the Bronco WR corps, but depth and experience do not.

The pressing need at the end of the 2009 season carried into Bronco recruiting this year as the Broncos allotted fully 2 scholarships out of as few as five to wide receivers. The lure of a Bryan Harsin offense and two more years with Heisman hopeful Kellen Moore was enough to snare two highly-touted WRs in this class. You've already heard about one of them, Matt Miller, now let's look at the other, Troy Ware, and find out just how close he may be to seeing action this Fall. 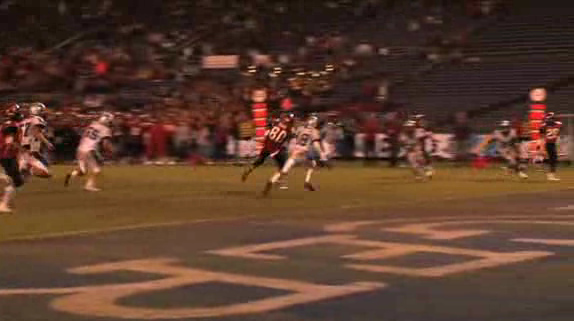 CIF championship highlight video. Ware's one real highlight comes at the 4:47 mark...but you have
to watch the whole video to appreciate the vocal stylings of announcer Loghan Call.

Ware didn't put up the gaudy numbers at Vista High School that many have come to expect of Division 1-A recruits. This was primarily due to the fact that Ware played at a school that employed a very run-oriented offensive scheme. However, despite Vista's run-first, run-second propensities, Ware found ways to make his presence known. He was the go-to receiver on the squad as a senior and helped lead the team to a Championship game while hauling in 45 passes for 650 yards and 6 TDs. As a junior, the 6'2" 175 lbs. WR put up virtually identical numbers but did so with only 28 receptions. Ware excelled on the track as well garnering All-League nods in the Long Jump and the 200. Ware's father Tim starred at WR in the early 80s at USC before playing briefly in the NFL with the Chargers and Raiders. I think it worth mentioning that his dad is only 5'10".

Ware's got the size...he's got the genes...now, what of his game? ESPN's venerable recruiting service had this to say, among other things:

"Ware has the size, athleticism and playing speed for the wide receiver position at the major level of competition."

"He shows good production with the ability to be creative after the catch. "

I take this to mean that after the catch, he immediately starts doing Macramé...

Ware was given a 3-star rating and a 76 "Scouts Grade" (WR Matt Miller commit also was given a 76) by ESPN as well. That's all well and good, but what does Ware himself say is the best part of his game?

"My hands. I've always been pretty good at catching the ball and running routes"

So, good size, athleticism, speed, hands, and route running. Sounds like the type of wide receiver anyone would want. Being brought up in a run-oriented system probably indicates the kid has been taught how to block as well. I daresay Troy Ware looks to be the complete package.

Ware won the 1989 Heisman. His flat-top finished a distant 3rd.

When will Ware see the field?

This one's a toughie.

In two of the last three seasons, Boise State has elected to start true freshman at the wide receiver positions. 2007 saw the emergence of both Austin Pettis and Titus Young, which in hindsight, looked like a stroke of genius as the pair has developed into one of the most dynamic receiving tandems the Broncos have ever had. Of course, last year the Broncos burned Kirby Moore's redshirt to slightly less spectacular effect. Now, with talented receivers Geraldo Hiwat and Aaron Burks coming of redshirts, will the Broncos' receiving corps simply be too deep for true freshman to see the field in 2010? I wouldnt rule anything out.

The precedent has been set during Coach Pete's tenure: the best guy's play...and the drop-off we've seen when Young and Pettis is like the drop-off on the cliffs of insanity. 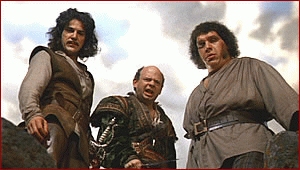 Ostensibly, Austin Pettis and Titus Young are locks at their positions, but after that it's anyone's guess. Rumor has it that Aaron Burks nearly lost his redshirt in 2009 in addition to Kirby Moore and Geraldo Hiwat can really move. Chris Potter showed towards the end of the year that he is a very serviceable sub while Tyler Shoemaker had an up-and-down season that ended early due to injury. Both Miller and Ware bring speed and height to the wide-out spot...something that Boise State finds together very seldom it seems. With Kellen Moore under center for another two years and visions of BCS title runs dancing in our collective heads, don't be surprised for a minute if Boise State adds more youth to their already puerile offensive lineup if it means better exploiting defenses and giving Kellsy another speedy, lanky target. I'll put Ware's odds of playing in 2010 at 60%

Will we see more true freshman WRs take the field this Fall? Will Ware and Miller both play? Will neither of them play? Does this shirt make me look fat? Leave'em in the comments.