Share All sharing options for: A breakdown of returning starters and how it might impact Boise State's 2010 opponents

As Bronco fans are well aware, Boise State returns 23 starters off of last year's Fiesta Bowl team. If only other college football teams were so lucky.

The opponents on the Broncos' schedule do not have the hoards of returners that BSU does, but several teams are in just fine shape. The worst of the bunch? Virginia Tech and Toledo. The best of the bunch? Idaho and Nevada. After the jump, view the breakdown of Bronco opponents' returning starters and discuss just how much experience matters in big-time college football.

Many thanks to Phil Steele for compiling this list of returners. His full post on this topic is worth the read if you have 15 minutes to blow and enjoy tables. 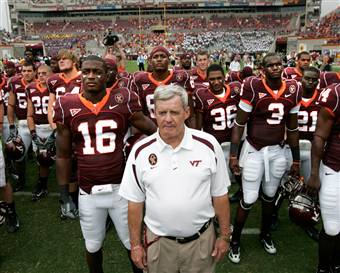 "I don't know the names of half the guys standing behind me." (via nbcsportsmedia3.msnbc.com)

Virginia Tech fans to get very familiar with their gameday program

It is no secret that the Hokies do not return loads of players off of last year's team. For this reason and perhaps for this reason alone, the opening weekend clash with the Broncos makes scheduling sense for BSU.

But the least experienced team on the Broncos' schedule? I never saw that coming. I mean, who knew there were 17 players who wanted to come back to New Mexico State?

The Hokies will be hurt the most on defense where only five starters from last year's team return. So the question becomes: Just how much does experience matter at this level of college football? Teams from BCS conferences have the luxury of reloading with deep talent (something that Boise State can also do now), so it would reason that attrition matters less and less. What kind of impact do you think experience will have on the Labor Day game in D.C.?

Idaho returns 10 starters on defense. Too bad for Idaho.

Experience typically means success, unless your team is experienced in letting offenses run all over you.

Returning 10 players off a defense that gave up a WAC-worst 35 points per game is not necessarily a good thing for the Vandals. Though they sit at the top of the returning starters chart for Boise State's opponents, their defensive largess is unfortunate. The Idaho Vandals: Finding new ways to lose since the late 90's.

Here's something that will most definitely appear in a WAC press release this offseason: Every single WAC starting QB from last season returns in 2010.

The WAC is the only conference in college football that can claim this. But if you are taking this news as a sign of trouble for the Broncos in their WAC schedule, rest easy. This is the WAC we are talking about, and even in a year when all the starting QBs return, more than half of the starting QBs might not be starters come opening week.

No doubt you will see Colin Kaepernick, Diondre Borel, and Nathan Enderle under center for their teams. But take a look at the rest:

If the WAC QB shuffle happens, it would be the reverse Tom Brandstater effect - replacing a veteran QB because the veteran QB is awful. Thank goodness Boise State's quarterback controversies don't go down like this.

Expectations will be high in Nevada

Looking for teams that are probably going to enter next season overrated? Find teams that return quarterbacks and a lot of offense but lose a bunch of defense. Alabama is a clear winner here with a fairly meh quarterback back along with eight offensive starters but just two guys on defense coming back and neither specialist. The Tide has the fewest returning starters of anyone the SEC.

If Boise State starts preseason at No. 2 or No. 3 and Alabama is indeed overrated, the Broncos would be in national championship contention awfully quick.

How much does experience matter?

In the case of Boise State's matchup with Virginia Tech on Labor Day, I would like to say that experience makes all the difference in the world and just hand the national championship trophy to the Broncos already! But I know that is not true.

Coaching matters. Schemes matter. Talent matters. There are a lot of ways to overcome a lack of experience, so basing a prediction of any sort on experience alone is irresponsible. For example, take a look at the 2008 Boise State team. The Broncos had to replace 18 seniors who graduated in 2007, including Marty Tadman and Taylor Tharp and the majority of the starting offensive line. And all the 2008 team did was put together one of the best seasons in Boise State history.

On the other hand, think back to Boise State's Fiesta Bowl win over TCU. A lot of experts have said that the Horned Frogs suffered because their team did not have the previous Fiesta Bowl experience that the Broncos had. (I only sort of buy that argument since a good number of Bronco players on the roster last year were not a part of the 2006 Fiesta Bowl team.) Experience is magnified on the big stage, and the stage won't get much bigger than Labor Day night in Washington, D.C.