NCAA's new celebration rules may take away touchdowns, discourage the next Titus Young

Share All sharing options for: NCAA's new celebration rules may take away touchdowns, discourage the next Titus Young

The NCAA, in its continuing quest to drive college football fans toward professional soccer, has proposed a number of rule changes for the coming years, the most significant being a change to how excessive celebration and taunting penalties are handled. Good bye, touchdowns. Hello, prudes.

After the jump, find out the details to the NCAA's new celebration penalty and discuss whether or not it will impact any players on the Bronco roster. Is the NCAA taking things too far? Let's talk about it.

The NCAA rules committee, chaired by former Oregon coach Mike Bellotti, proposed a new celebration/taunting rule that could take points off the board for the offending team. Great. Just when New Mexico State thought it had this scoring thing figured out..

If passed, players who draw flags for taunting gestures on their way to a touchdown would have the penalty assessed from the spot of the foul, taking away the score. Penalties that occur in the end zone would continue to be assessed on the extra-point attempt, 2-point conversion try or ensuing kickoff.

The rule is unique to many other celebration penalties because it can either be enforced after the play or during the play - a dual citizenship of football infractions. The rule still must be approved (a foregone conclusion to those in the know), and if passed, it would take effect in the 2011 season, making 2010 a four-month-long Fat Tuesday of taunting.

When it comes to this new rule, the player Bronco fans might get the most uneasy about is Titus Young as his TD celebrations have become a routine source of referee spite. But no worries. Young graduates after the 2010 season, thereby missing out on the newly fundamentalist regime.

Is Boise State likely to have another Titus-Young-type entertainer on its team? Tough to tell. The reaction to Young's celebrations has been media disapproval and Brent Pease spittle, neither of which players are likely to covet. Few other players on the team have had any issues with celebration penalties. But then again, Michael Atkinson has yet to score a touchdown. We'll have to wait and see. 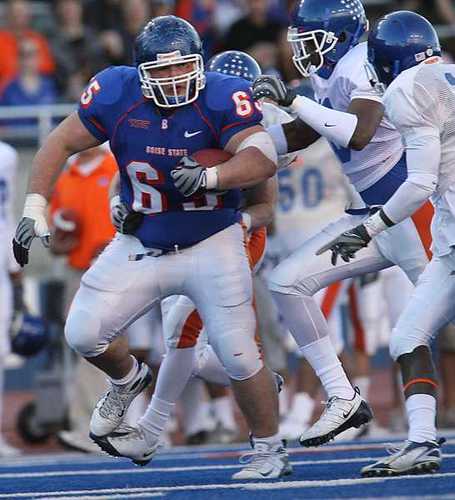 "Leave me alone. I had a very intricate robot dance planned.) (via media.idahostatesman.com)

Do you think any Boise State players will have the same celebration troubles that Young has had?

Post-TD celebrations are not really even the new scorn of this rule. Young's misdeeds all came well into the end zone, so losing TDs would not have applied. However, there are still plenty of standard football hi jinks that could be affected:

Let's make a deal, college football. You can get rid of the high-stepping and choreographed celebrations if you give us a playoff. I think it's only fair.

The NCAA will not stop at simply taking away celebrations. It also has its eyes on personality, special teams TDs, lower leg modesty, and pre-game fights.

Among the other NCAA proposals:

I guess that consistency on defensive pass interference can wait until next year.

Are you a fan of the NCAA's proposed new celebration penalty? Should touchdowns be taken away due to excessive celebration before the goalline? Will any Boise State player take over Titus Young's reign of celebration iniquities? Share your thoughts in the comments.