Share All sharing options for: An ode to Kellen Moore-written in the style of Chaucer and Làpray

Saying that Kellen Moore is awesome doesn't quite cut it anymore. To put it succinctly...the kid's money—we know that...WAC defenses know that...heck, even Graham Watson knows that. But, how do you honor a humble guy like Kellen Moore in a way truly fitting of his impressive first two years? After a lot of pondering, it came to me: a poem must be written in Kellen's honor. The only problem was, I didn't really know how to write a poem, but I wanted to "go big"... so I went and studied two of the most admired and verbose poets of all time, Geoffrey Chaucer and Dustin Lapray. With the help of an English to Olde English dictionary I was done in no time and now (after the jump) present to you my Ode to Kellen Moore...written in the style of Chaucer and Làpray (the little swash over the "a" added for emphasis...and fanciness)

Heavy-footed Heisman hopeful, I salute you. You, who hath made the sophomore slump a sophomore triumph over thy foes. I ask...who has captained his gridiron soldiers to perfect regular seasons not once, but twain? Sir Ryan of Dinwiddie? NAY! The fearless field general who wields not lance nor mace nor cat-o-nine-tails but the leather projectile that 'tis Wilson-made has already brought glory and honor to a Nation—yet he returns!

This "Kellen Moore" who was discovered by the dear departed bestower of the four-two-five, has now delivered his closest kin to the Blue from the jaws of the Huskies. Does more glory await now that the brothers Moore have waged their holy battle against the BCS? YEA! 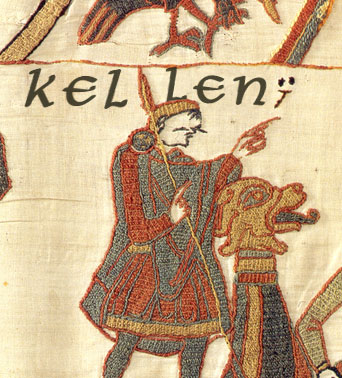 Kellsy of the high QB rating shall not needlessly throw pick-sixes any longer. Those endeavors served only to bolster his enemies' spirits before they were dashed hopelessly by the Pettis. The Pettis is unmerciful...so too Titus the Young and Moore the Younger. Kellsy is benevolent in victory, but gives his foes no quarter through four quarters.

Kellen has hoisted many spoils aloft...the WAC Championship goblets...the Fiesta Bowl urn...the Freshman of thee Yeare...the honors of thee Touchdowne Pub of Columbus. Kellen accepts these trinkets, yet desires them not! He desires the Foote Ball forged of Hartforde Crystal...he desires the statue of Heis Man. Kellen will acquire these treasures and laugh in the faces of the dark lords Maye and James...he will thrust a pointed finger in the face of Grayham Watts' son and exclaim "Depart from ESPN...get thee to CSTV, forthwith!"

Possessing not the arm of the Jeff George nor the feet of the Eric Crouch bothers Kellen not...for he has the heart of a lion and the accuracy of a (unladen) swallow swooping for it's quarry. Kellen has tasted of bitter defeat but once, and durst not taste of it again. The Bronco Nation will follow him on his quest, be it to the heart of Blacksburghe or into the squalid bowels of Moss Cow...all the way back to Glenn Dale, for it is there that the grandest prize shall be given in two-thousand and ten. A hearty cheer and "Hail fellow, well met" for our fresh-faced savior. May he continue to bring glory to the Nation of Bronco and utter devastation to its enemies.

**Decree: All comments must be written in Olde English.