Share All sharing options for: Speculation 101: Where would Pac-10 expansion leave Boise State?

It's early-to-mid-February, and that can mean only one thing: Confusing LOST episodes and conference expansion discussion!

The Pac-10 is the latest conference in search of an extreme makeover, and if the chips fall where they are expected to fall, Boise State could be in store for some positive collateral damage. After the jump, discuss where the Broncos might end up, whether or not that's good enough, and what the WAC could do about it.

The facts as supported by rampant rumors and speculation

Pac-10 commissioner Larry Scott and brand new Pac-10 No. 2 Kevin Weiberg did a round of conference calls and interviews about the conference's future, in particular an expiring TV contract and potential revenue sources. Naturally, the topic of expansion came up:

"It really is over the next six to 12 months that we'll start having serious analysis and serious conversations," Scott said about potential expansion.

It would make sense for the Pac-10 to expand in order to reach the magical 12-team league and conference title game that deep-pocketed TV suitors crave. Currently with 10 teams, speculation has turned to the possible additions of Utah and Colorado to round out the Pac-10 into the Pac-10 Or So. The Utes and Buffs would be chosen, it is presumed, due to their athletic and academic excellence.

BYU may then get invited to the Big XII to take Colorado's place. The Mountain West would be two teams smaller and could then offer an invite to the Broncos and one other team.

Check out today's Wake Up Bronco Nation for more links to this story, and read the Intern's FanShot for some early comments on the topic.

Why would Boise State not get invited to the Pac-10? 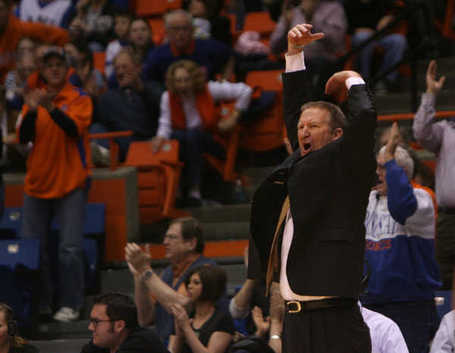 The Pac-10 wants their new teams to fit "academically and culturally," and according to people in the know, Boise State does not have the academic or cultural clout to make it work. (Curse you, Wahooz Fun Center.)

Boise State to the Mountain West looks more and more likely ... party on?

Bronco fans have wanted the team to be a part of the Mountain West for several seasons now, but is this the Mountain West we all had imagined? Part of the excitement in moving to a different conference was the improvement in quality, the national respect, and the temporary reprieve of Mark May's strength of schedule rants.

With Utah and BYU not in the Mountain West, would you be happy with the Broncos moving to the MWC?

If the Utes and Cougars leave for greener pastures, the Mountain West would be left with this murderer's row of New Mexico Bowl candidates:

People are actively rushing away from the Bronco ticket office as we speak.

TCU is obviously an improvement over any team currently in the WAC. The Horned Frogs are one of the nation's best, and they will remain so for many years. (Note: TCU could end up in the Big XII if Missouri is wooed away to the Big Ten. So yes, it could get worse for the MWC.)

Take away the Horned Frogs, and you have college football's WAC 2.0. Is Boise State joining a conference that just lost two of its top teams worth all the trouble of leaving the WAC?

Then there's this: One of the main benefits to joining the MWC is that there is a glimmer of hope that an automatic qualifying berth in the BCS might be in the MWC's future. How likely would that automatic berth be if Utah and BYU leave?

Mountain West expansion may not be everything it was cracked up to be if things happen a certain way. What are your thoughts on BSU going to the MWC? It appears at first glance that the Broncos might be the non-BCS team left in the dust once realignment settles down.

Time for the WAC to get its vulture on?

Another interesting way to look at this topic comes to us courtesy of Brian Murphy's Twitter account:

If Mountain West loses Utah and/or TCU look for WAC to make play for some remaining teams such as BYU, Air Force, maybe UNLV

Karl Benson, preying on the misfortunes of another conference?

The losses of Utah, BYU, and/or TCU could swing the non-BCS power to the side of the WAC, and Benson and Co. could be in position to make a power play and build up the WAC's membership. Boise State could stay in the WAC, the conference could add an Air Force, UNLV, and/or SDSU, and everyone would win. Well, everyone but the Mountain West because that would pretty much spell the end for that conference.

What teams would you want the WAC to poach?

Assuming BYU, Utah, and TCU are off the board, I think it would be tons of fun to have a WAC that included Air Force (I love triple option more than I should), Colorado State (I love snow games), and Wyoming (Laramie, holla!). Three more teams would make the WAC a 12-team conference, and while I despise the idea of a conference championship game for a conference with such a clear cut favorite, 12 teams in the WAC could provide some interesting opportunities in media negotiations and postseason implications.

What do you think of this conference realignment talk? Would you want the Broncos to go to the MWC if Utah and BYU were not in it? What would your new-look WAC look like? Share your thoughts in the comments.