Boise State recruiting: Will DE Tyler Horn be the next great local product?

Share All sharing options for: Boise State recruiting: Will DE Tyler Horn be the next great local product?

Boise State has quickly become a national powerhouse since joining the D 1-A ranks in 1996. The speed of their ascent is made all the more impressive when one factors in that the Broncos have done so on the backs of walk-ons, local products, and largely unheralded recruits who didn't fit the "BCS mold". The Broncos are easily the school of choice for the best players in Idaho, and many have become All-WAC performers in their tenure here and some have even gone on to play in the NFL.

This year's recruiting class looks like more of the same for the Broncos, as they've secured the commitments of two local standouts, Capital's Kyle Sosnowski and Mountain View's Tyler Horn. All the better considering that both accepted grayshirt invitations that will further help out this recruiting classes' unique set of circumstances (only a handful of scholarships). Today we'll look at a position that has been friendly to Idaho products of late, and a player with the upside to be one of the best we've seen in a while.

Check out the rest of our article after the jump to read about Maverick-turned-Bronco Tyler Horn before he signs on the dotted line next week. 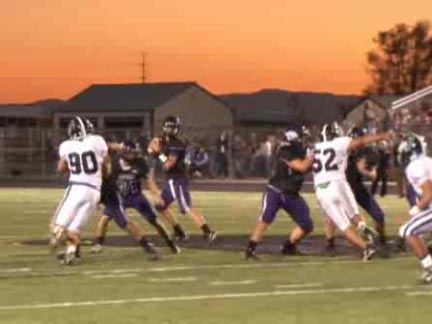 Click the above image to watch a few Horn highlights.
Check out a nice Horn (#90) sack around the 1:50 mark and manhandling a hapless OT at the 2:04 mark

Following an outstanding senior season that saw him notch 50 tackles (nine for loss) and 12.5 sacks, Horn was named the 5A Southern Idaho Conference (SIC) Defensive Player of the Year and was an All-Idaho first-team selection. Horn's play also earned him a starting spot in the East/West Shrine game. Horn, who is currently 6'4", competed at 230 lbs. as a senior, which was up about 20 lbs. from his junior season as a Maverick. It's clear that Horn hasn't yet reached his full potential as an athlete, and has yet to stop growing—a fact that just made just made S&C coach Tim Socha do a spit-take.

None listed, but we're sure that the Idaho Vandals furiously tried to inform him of Boise State's "inferior" academics and facilities after he officially gave his verbal commitment on January 27th.

Horn fits nicely into the "sleeper" category. Many Bronco fans knew little about the Mountain View bigman and were surprised when he popped onto recruiting boards in mid-January as a likely Bronco commit. This certainly isn't to say that Horn was undeserving of any buzz or accolades. Horn had been the object of Bronco coaches' affections since at least last summer's high school football camp, where he was named the top defensive lineman, and Rivals.com recently affixed 3-stars to Horn's profile and pegged him as the 2nd best DE in the state. Horn's coach at Mountain View, Judd Benedick couldn't say enough about the giant in his midst.

"I think he has the measurables, for sure...He's 6-4 and his dad is taller than that, so he should continue to grow. He has the frame and moves really well for a kid that size."

Yes, he moves well enough to be the starting post on the Mountain View basketball team...but enough about his size. What else, coach?

"(Grayshirting) will be great for him, give him a chance to bulk up..."

Ok, coach...you're a little hung up on size right now...is he a well-rounded athlete?

Will Tyler Horn be the next great local product?

I certainly don't see why not.

The Broncos recruiting tentacles have spread to nearly every state in the union nowadays, but some say the most important recruiting battles are the ones at home. In this regard, the Broncos have done outstanding of late, tilling the recruiting grounds of the Treasury Valley and beyond to produce top notch talent that win title after title. Notable homegrown walk-ons and recruits during Boise State's golden era are names like Brock Forsey, Nick Schlekeway, Korey Hall, Jeb Putzier, and Tad Miller—and the 14-0 2009 squad relied heavily on local stars like Jarrell Root, Shea McClellin, Byron Hout, Nate Potter, Kyle Brotzman, Tyler Shoemaker, and Matt Kaiserman. The signing of DE Tyler Horn represents another local recruiting win for Chris Petersen's staff and another Idaho product to add to the growing list of Gem Staters on the Blue.

Horn, as has been previously alluded to, will join the Broncos as a grayshirt. For those unfamiliar with the intricacies of this particular shirt hue...a grayshirt, in a nutshell, is when the player enrolls for fewer than the 12 credit hours required to trigger the eligibility "clock", usually during the January following his graduation from high school, rather than August. This will be a boon to Horn as he will be able to spend time in the weight room filling out his frame, and time familiarizing himself with the X's and O's of the Bronco defense. By the time Horn joins the team "for real" in 2011 he will likely be a 6'4" or 6'5" 260 lb. hand full for tackles throughout the WAC and beyond. Ryan Winterswyk will have graduated, and standouts from the new crop (Nick Alexander, Tyrone Crawford, Kharyee Marshall) will have crept into a dazzling DE rotation alongside stalwarts like Shea McClellin, Jarrell Root, and Byron Hout. Given the precedent set lately of starting local players at Defensive End or moving them to that position certainly bodes well for Horn. If he's the freak that Mountain View coach Benedick says he is, I'm sure we'll see him in the ever-deepening DE rotation sooner than later. Of course, the grayshirt generally dictates that we won't see him go live for at least another year, but the Bronco staff has proven themselves experts at evaluating and utilizing the available talent. Horn will be a great one.

When will we really get to see what Tyler Horn can do? Anyone seen this kid in person? Is Boise State going to have as many DEs as TEs soon (rumors are swirling that a third may have joined the 2010 class)?