The college football season is nearly over, and programs around the country are jettisoning their futile coaching staffs. As you well know, this means that Chris Petersen's name will be bandied about like a doob at a Phish concert for every vacancy from Lafayette, LA to Pittsburgh, PA. With Urban Meyer's "sudden" resignation from Florida today, it's only a matter of time before Coach Pete sits atop the Gator's short list. Well sirs/madams, I'm heading you off at the pass. After the jump, I present the 15 reasons that Pete isn't going to Florida...and for good measure—2 reasons that he'd consider it.

15) Humidity really does a doozy on angel wings.

14) Petersen likes the West Coast and Florida hasn't played further west than Louisiana since Rutherford B. Hayes was president. 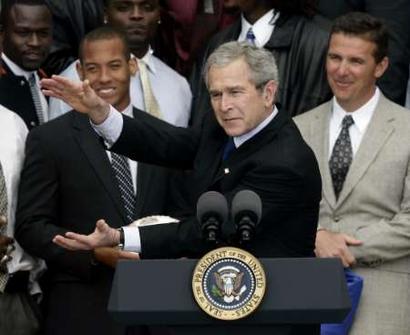 9) You can own half of Boise on a $1.5M salary...but in Gainesville could only afford a one-room flat with a trundle bed.

8) Too close to Epcot Center.

6) Wants to see what Jeremy Ioane is capable of.

1) A benevolent God wouldn't allow it.*

*I didn't think a benevolent God would allow us to lose to Nevada, either...for whatever that's worth.

2) Wouldn't have to change wardrobe