The Boise State men's basketball team is off to a 6-1 start, and now they're off to UNLV to see how good that 6-1 really is.

Not only that, but tonight's visit to Vegas begins a three-game road stretch that figures to be the Broncos' toughest of the season. After UNLV tonight, Boise State faces Drake on Sunday and Utah the following Friday. It's a veritable SOS binge.

The Runnin' Rebels are ranked No. 20 in the country and off to an 8-0 start, their best since the 1990 season. Hey, Larry Johnson was on that team. Gratuitous Grandmama photo! 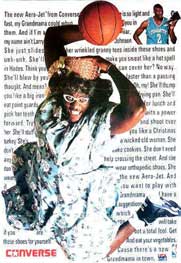 UNLV is fresh off a victory over Nevada and has defeated Virginia Tech and Wisconsin already this year. The Rebels are really good, and the Broncos are going to get a taste of what Mountain West basketball will be like for the next however many years the Mountain West exists. Hopefully it tastes like victory. But I'd be fine if it tasted like moral victory.

I know absolutely nothing about the Drake Bulldogs except a) they are the Bulldogs and b) they play in that super good Missouri Valley Conference. Oh, I also know that they are 2-4 on the year, including a one-point loss to Weber State.

If the UNLV game is a test of raw brutality, the Drake game might be a test of progress. Assuming that Boise State is vastly improved from a season ago, the Drake game is the type of game that the Broncos should win. They won a similar one at Northern Illinois in November.

The Broncos conclude their three-game road trip with a visit to Salt Lake against the 6-2 Utes. Utah is not quite up with the top teams in the might Mountain West, but they are good. And their date against the Broncos comes a full week after their previous game at Michigan.

How will fans respond if Broncos win or lose?

The men's basketball team has built up a lot of goodwill with its 6-1 start, so here's hoping they don't go throw it all away with a stinker of a three-game road trip. Hopefully fans are more committed than that, but you never know.

Personally, I've committed to be more of a Bronco basketball fan from here on out, so their results in these three games isn't likely to change my opinion. This early season success has been a bonus as far as I'm concerned.

Let me know how you'd respond.