Share All sharing options for: BIFFF on Boise State versus Utah State

The Boise State defense shut down the Utah State passing attack on Saturday. How bad was it? Bronco special teams owned the Aggies in all phases. Even the Kyle Brotzman phase?

To find out the answers, I consulted the BIFFF stats - OBNUG's advanced stats system using gamecharting, gamewatching, and formulas. Find out what went down in the Utah State game and feel free to share any stat observations you had. Join me after the jump.

The five most interesting stats from Boise State versus Utah State 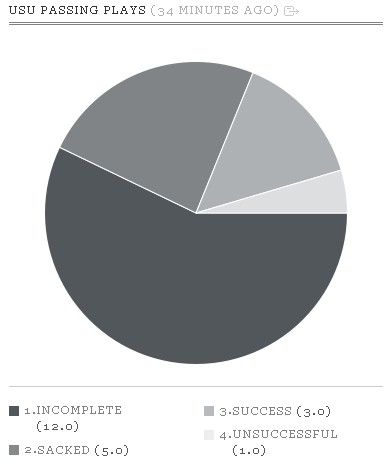 Diondre Borel dropped back to pass 21 times. He threw incomplete 12 times. He was sacked five times. And one of his four completed passes did not gain enough yards to be considered successful. 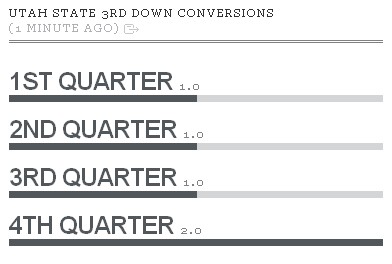 The Aggies had a single conversion in each of the game's first three quarters, and that is no way to win a football game. Conversely, the Broncos - who finished with a 50-percent-plus conversion rate - had three on their 13-play, 57-yard drive to end the first half, including a 3rd-and-16 pickup and a 3rd-and-10. 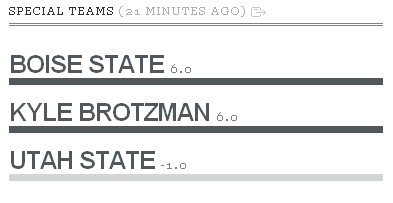 Yes, Brotzman missed another field goal, but his punting was top-notch on Saturday. I've borrowed a special teams formula to help quantify overall special teams play (you can see the full breakdown here), and Brotzman's punts were good for six points, which is pretty stellar when it comes to punting. Overall, the Broncos had six points on special teams (plays can count for both positive and negative results). Utah State had -1.

Note: I totally understand those people who think the altruism toward Kyle Brotzman is a little misplaced considering he's a very shaky kicker right now. I'm just not too interested in having that discussion. The Broncos aren't really playing games that matter any more, so I have a hard time getting passionate about it. 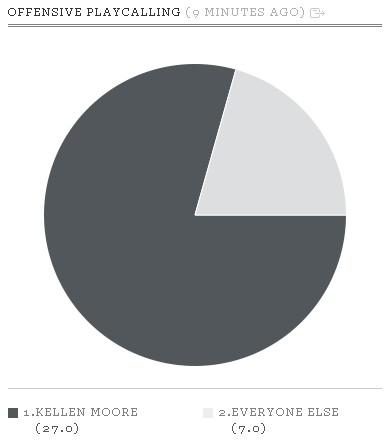 Kellen Moore had a stretch of 27 passes in 34 plays

Included in the Broncos' pass-heavy afternoon were separate streaks of nine consecutive passes and 10 consecutive passes. Maybe Jesse Palmer got to Coach Pete and made him think that Moore was a senior. (HT: MKingery)

Boise State held onto its national lead in sacks per game

The Broncos finished with five sacks on Saturday (I credited Billy Winn with a sack on his first quarter takedown of Diondre Borel; play-by-play disagreed). And that number was good enough to improve their per-game average and keep their national lead.

The Broncos were 70th in the country last year in sacks per game with 1.79. They average 3.75 per game this season.

What did you think of Boise State's defensive effort? Happy with Kyle Brotzman's punting? Surprised Kellen Moore got so many pass attempts? Share your thoughts in the comments.