Will Kellen Moore be named a Heisman Trophy finalist today?

Share All sharing options for: Will Kellen Moore be named a Heisman Trophy finalist today?

Update 4:15 p.m.: We know the answer. Kellen Moore is a Heisman finalist.

We'll know the answer to that question at 4:00 p.m. MT. But until then, speculation!

After the jump, I run down the list of those being considered for college football's most prestigious award. Feel free to leave your thoughts on who should be in and who should be out.

A note about Heisman finalists

How many will there be? Nobody knows. Well, at least I don't know. Typically there are anywhere from three to five finalists who make the trip to New York, and with Cam Newton being such a clear favorite, it's hard to tell what standards the Heisman committee will use to pare its invite list. Top four vote-getters? Most name recognition? Broad representation of height? Tokenism? If the last one's true, expect former Virginia Tech OL Ed Wang to be in attendance.

Cam Newton will most definitely be in New York, probably wearing a million-dollar suit of ostrich feathers that he "found at a Nordstrom Rack." As the prohibitive Heisman favorite, he's a shoo-in to get an invite. 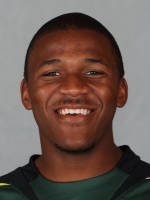 In the Heisman running all season long, James should easily make the trip to New York, especially now that his Ducks are playing for a national title. Pardon me. "National title."

Considering that Moore has been at the top of Heisman lists all season, he should end up in New York this weekend. That said, college football has a strange obsession with marginalizing non-BCS teams and players. When Colt Brennan made it, he did so on an undefeated Hawaii team and during his senior season where he set national records galore. Kellen Moore would be doing so in a junior year where he set school records and led his team to the Las Vegas Bowl. It's obviously not the same, but I think the fact that Moore is even still in the discussion for the Heisman speaks volumes about his abilities as a college football player. Heisman pundits have realized this all year, so I don't see any reason to stop thinking so now.

Thanks to Stanford's great season (only loss was to Oregon), Luck has really come on as a Heisman candidate of late, and some are projecting him to finish second on Saturday night. Sure hope he gets invited then.

Is being the best wide receiver in college football enough to get you an invite to the Heisman? It hasn't been in years past, but you never know.

I'd imagine that if Mallett were to head to New York, he would do so at the expense of Kellen Moore. There's just no reason to have four quarterbacks there. That said, it would be a big upset for this to happen.

Who do you think will be showing up in New York on Saturday? Will we have four finalists? Will the world come to an end if Kellen Moore isn't one of them? Share your thoughts in the comments.