The votes are in for 2010's Top 10 moments in Boise State football. Thanks to all who took the time to vote, and thanks to the Broncos for an unforgettable year (which will be even more unforgettable when I buy the 2010 season DVD). Happy 2010, everybody. And here's to a great 2011!

Boise State's skill players did a rewrite of the school record book, taking the top spots in several significant categories, changing all masculine "he" references to asexual "person," and painting mustaches on Dan Hawkins. Sorry, old timers and Ryan Dinwiddie. The record-setting year included Kellen Moore's assault on quarterback greatness, Austin Pettis and Titus Young becoming a metaphorical double rainbow, and Kyle Brotzman becoming a legend in a good way. Tom Scott is going to have to get a new Tom Scott Boise State Football Almanac.

Bang! Kellen Moore throws 58 yards to Titus Young for Boise State's fourth touchdown of the first quarter against Idaho. Bang! Bang! Moore whips out a pair of make believe guns and fires a round toward backup quarterback Michael Coughlin. Fistpump! Me, in my living room, because I will never be cool enough to pull off the double imaginary pistols.

My life has not been the same since you ran over me for a touchdown. I am tentative on tackles. I am less confident with women.  My entire outlook on life has changed since that play as I have gone from a preening, self-confident macho man to a timid, flighty waif of a human being. You haunt my dreams, and the thought of that hit shakes my bones to their very core. I don't take life for granted anymore, that's for sure! I am so cold.

Ps. I am cold because I am not wearing a shirt. Also, you stole some of my soul. 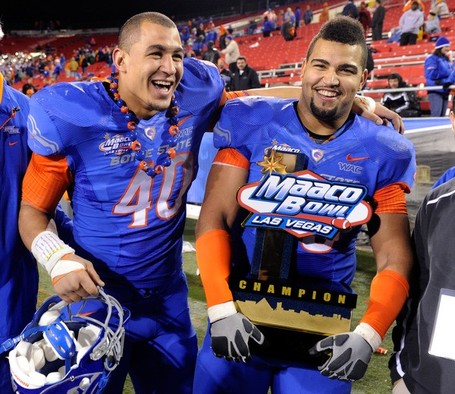 Mid-tier bowl games may not be as lucrative as BCS games, but they sure are a lot of fun. Before Utah and Boise State even kicked off, we had an airing of grievances at the Hard Rock Cafe, uncomfortable photo shoots with Coach Pete and showgirls, Twitter trash talk, and so much more. And then there was a game, which Boise State won handily despite their best efforts not to.

No. 6: Broncos begin season ranked No. 3

For the record, I firmly believed that this would never happen. Idiot or super conniving reverse psychology? Idiot.

I was 20 feet away from Erin Andrews. I nearly touched Desmond Howard. I yelled something I regret at Lee Corso. What a day. College Gameday coming to Boise cemented Boise State's status as a big-time draw and hopefully left a good enough impression that the Worldwide Leader will be "coming to our citayyyy" many more times in future years. Like for the Boise State - San Diego State game next year? Yeah? No? OK, just thought I'd ask. 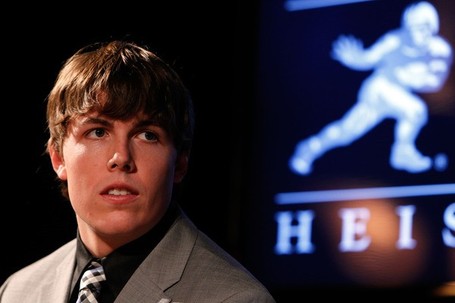 This type of thing isn't supposed to happen to non-senior non-BCS quarterbacks. Colt Brennan had to make a deal with the devil to get there. Andre Ware and Troy Detmer had to live in completely different eras. For Kellen Moore to earn a Heisman invite during his junior season and on a Vegas Bowl-bound team is simply astonishing and most definitely worthy of a Top Five moment of 2010. And that suit-and-tie combo? Just try to stop me from buying it at Macy's. Too late. You didn't. It's in my closet. 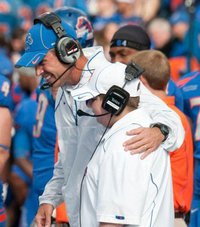 It says a lot about just how special this story was that it made Boise State's Top Three moments of a year that saw the team reach historical new heights and do things that were previously thought impossible. Coach Kinsey deserves it. This was a story that transcended the game. Its unique message - one of hope and courage and spirit - stood in such stark contrast to the depressing politics of college sports. Coach Kinsey reminded us what's important. And guess what? It's not Craig James's AP poll.

Also, Boise State is now looking for a wide receivers coach, so he should probably dust off that resume. 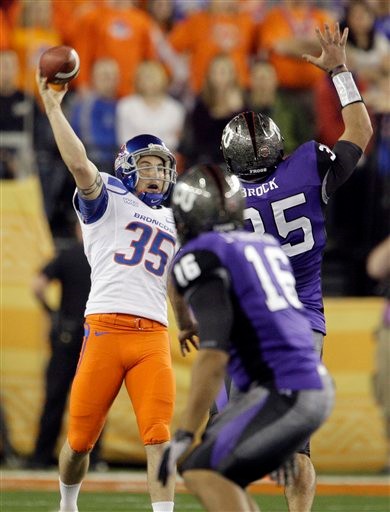 No. 2: Boise State beats TCU in the Fiesta Bowl

I feel like an old person remembering back to this Fiesta Bowl. Kyle Brotzman was a hero. Boise State was a huge underdog. BCS games were on FOX of all places. Were DVRs even around? Nobody remembers.

In a 2010 so focused on national championship aspirations and the intangible future, it is fitting that one of the year's top moments is the moment that started it all. Boise State's Fiesta Bowl win - an enjoyable three-hour roller coaster ride with big hits, big plays, and unlikely heroes - sparked an offseason of debate about Boise State's NCG chances. That's what happens when you return 22 of 24 starters from an undefeated team, not that anyone in the history of college football will ever have that luxury again.

It's hard not to remember that Fiesta Bowl without also remembering the firestorm of hyperbole it set off. But for a game - and nothing more - it was sure special. 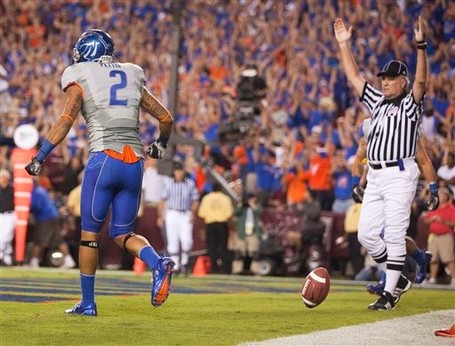 No. 1: Moore-to-Pettis to beat Virginia Tech

There was so much riding on the opening game of the season for the Broncos - national championship expectations, BCS road game reputations, my $20.00. And for portions of the final quarter it seemed like Virginia Tech would find a way to end Boise State's dreams before they really began.

But then Kellen Moore got the ball back, and every Bronco fan in the entire world sensed what would happen next. Five plays and 56 yards and the Broncos were in the end zone on the best play of the year - Moore to Pettis with a perfect throw in stride to the back of the end zone.

Here's the complete final drive. I dare you to find a better way to spend the next two-and-a-half minutes.

Broncos tie The Streak by blowing out Vandals for the last time that Coach Pete and Bob Kustra care to blow out the Vandals ... Boise State joins the Mountain West, everybody leaves the Mountain West ... Broncos dominate Hawaii, as God predestined ... Boise State blows out Fresno State, wears a lot of orange ... Jeremy Ioane commits to Boise State over Notre Dame, is a genius ... Broncos land two Sports Illustrated covers ... Georgia added to the 2011 schedule for first-ever matchup between the schools ...