It doesn't seem like Daron Mackey's career at Boise State should be over, does it?

Mackey transferred in to Boise State in 2008 and tore an ACL. He recovered in 2009 and contributed big minutes at middle linebacker ... then tore an ACL. His recovery from the second injury carried through the early part of this season, but he's now regaining his form. I just wish we had more time (the Nevada gameclock operator said the same thing).

But what I'll remember most about Mackey was his linebacking tenacity. You've probably heard the saying that running backs "run downhill." Well, Mackey plays linebacker downhill. He is fierce and tenacious and runs at you like a cannonball down a waterslide. 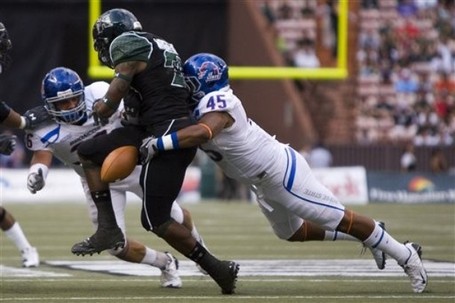 "Not in the face! Here, take the ball!" (via cache.daylife.com)

Here's hoping we get a few more good Mackey hits in these last two games. I haven't seen enough of him yet.