Share All sharing options for: Final pregame thoughts on Boise State vs. Utah

The Vegas Bowl marks Boise State's last game of 2010, maybe its last chance to stick it to Utah for years, and certainly its best shot at getting off the non-BCS bowl schneid. The game kicks off at 6:00 p.m. MT (ESPN). I've got lots of loose ends to tie up after the jump.

Join me for a discussion about the weather, how Boise State's season will be remembered, why Eddie George should stop talking, and more. The gamethread for tonight's bowl game will be up this afternoon. Until then, vent with me after the jump.

What you see above is the forecast for this evening's game at Sam Boyd Stadium in Las Vegas. I hope someone is taking prop bets on what type of poncho Boyz II Men will be wearing.

Was Boise State's 2010 season a failure?

That was a question posed on the Scott Van Pelt Show yesterday, and the conclusion of host Ryen Russillo and guest Ted Miller was a hearty affirmative. Boise State's 2010 season was a failure.

Now to be fair, both men acknowledged that the lofty expectations going into the year were the impetus for the fail label. They also brought up the perspective of us Boise State fans who apparently all feel unfulfilled by what transpired in 2010.

So the question's to you: Was Boise State's 2010 season a failure?

Pre-Snap Read votes "not a failure"

In his preview of the Las Vegas Bowl, Paul Myerberg writes:

in hindsight, perhaps the fact that the Broncos could rest their starters for the second half of most games until heading to Nevada took a toll on the starters, still on the field into overtime. If that’s the biggest problem a team has, you know it’s been a successful season. Par for the course, more of the same, nothing to see here, move along: the Broncos rolled out of bed and went 11-1. The future holds a transition to the Mountain West, where Boise State is sure to be tested more than it was in the WAC. What else does the future hold? Something like 11-1, 12-0 — somewhere in that area.

Then again, Myerberg is not a Bronco fan like you and I are Bronco fans. He didn't die a little inside that night.

Good-bye football. Until next year.

The good thing about the Las Vegas Bowl is that it's not the Humanitarian Bowl and it's not against Boston College or a MAC team. The bad part is that the game is today and the offseason is that much longer.

Only 254 days until Boise State at Georgia.

Bronco fans, this is your 2010 bowl opponent 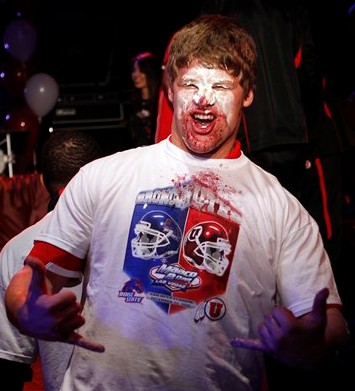 One of the most interesting subplots that came out of the Hard Rock Kerfuffle was this quote from Winston Venable:

Maybe now fans know we're motivated and not just trying to be in Vegas to have fun.

Keep in mind that Venable has been with the Boise State program for less than two years, so he wasn't around for the Hawaii Bowl and Poinsettia Bowl losses where, presumably, the reputation for having fun at bowl games began. So either the Bronco coaches brought him up to speed, students/fans directly expressed their doubts to Venable, or the Bronco Nation fanbase is neurotic to the point that the players feel they have to prove themselves by rough housing and trash talking before games.

Or it's some other reason that I'm failing to grasp.

But hey, Winston Venable is talking to us. How awesome is that?

If Boise State happens to lose this game, I call dibs on "they only practiced six times to Utah's 10 practices" being the go-to excuse ... I get the sense that this will be one of Kellen Moore's best games of the year and that Bryan Harsin will really let it fly, no offense to Doug Martin ... Do you punt to Shaky Smithson? ... I haven't watched too much Utah football over the past few years (what with The Mtn and all), so I'm interested to see how well Kyle Whittingham coaches a game - i.e., the Robb Akey way or the good way ...